From the sensational bout between Miesha Tate and Cat Zingano to the overhyping of Uriah Hall to there was much to love and hate at the TUF 17 Finale at the Mandalay Bay Events Center in Las Vegas, Nevada on Saturday night.

It's time to separate the winners from the losers, the good from the bad an the signal from the noise.

Overhyped doesn't mean 'bad' or 'has no future'. It means precisely what it states: the level of hype exceeded the level of reality, even if the reality is very strong. It's not Hall's fault (although his performance Saturday left a fair amount to be desired), but it is a cautionary tale about promoter speak and The Ultimate Fighter (TUF). FX and UFC aren't dispassionate, third-party observers around the tournament among fighters. They're selling it to you, which doesn't mean they can outright lie, but they didn't. They merely presented opinion and underscored it by having it come from the lips of people with (ostensible) credibility. The point doesn't change, though. One should always be careful about hype, be it from Dana White or Bjorn Rebney or anyone who directly benefits (short or long term) from your acceptance of it.

MMA success is about answering a series of highly diverse challenges in a sport filled with variables and chaos. Until such challenges are met, hype is only valuable as a tool for amusement. 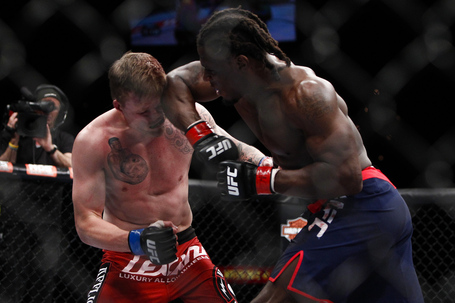 If there's more perfect timing in MMA photography, I haven't seen it. Check out all of Esther Lin's photos from Saturday.

I don't want to levy this as a huge criticism of Dana White's comment. Generally speaking, he's right that something was off with Hall on Saturday night. Yet the particular form of criticism lobbed from the UFC boss is a slightly mean-spirited misunderstanding.

So, what did happen? Two things. First, Hall showed that while he's a sensational athlete and striker, one of the long-standing shortcomings in his game hasn't been sufficiently improved. Second, he showed questionable tactical judgment. Gastelum was right to get Hall backing up, but as long as Hall stayed mobile and struck from a distance, he did well. The Tiger Schulman product thought it'd be a good idea to put his back against the fence, but he gave Gastelum the stationary target he needed.

But that's not the same thing as breaking. I'm sure nerves played a part. Hall later stated he wanted to have fun, probably to keep things light. Maybe he overcompensated there. But the fight was close and he never quit, which is what typically happens when someone is overcome by a challenge.

We're probably splitting hairs, but I felt the criticism was unfair. Hall made mistakes and should be called to task for them, but quitting from the magnitude of the occasion or opponent's attack is not a error he committed nor needs one that needs to be addressed going forward.

Women's MMA is not as developed as the men's side of the game by basically any measurement. That does not mean, however, that all portions in every circumstance are a lesser version of men's MMA. What Tate vs. Zingano showed is, generally speaking, it's better to have two of the world's best female fighters (at least in the best, most active division) compete on a UFC main card than two utterly forgettable male characters hovering somewhere around or outside the top 25.

Not every decision UFC makes in terms of where to put each fight on a card will be obvious or easy. There are numerous considerations to make when selecting such a thing. But what I'm getting at is that I'd prefer to see the world's best women at bantamweight compete in the UFC than guys who are TUF re-treads or fighters with otherwise limited upside. They're better talents, relatively speaking, doing more impressive work. More of that, please.

Winslow's calls on Saturday weren't the worst I've ever seen, but they weren't exemplary either. The problem, though, isn't what she did or didn't decide. It's what the Nevada State Athletic Commission wishes to do about it and how they do it.

The problem with referee review is that it's an entirely subjective, secretive process. We're told if - IF - Keith Kizer believes there's an issue, he'll have some sort of review where he'll ask a judge or referee to explain their position. Depending on what he hears, he'll make a decision about future placement, sanctioning or the like.

What a complete non-process. The current system is better than nothing, but not by much. There's no transparency, no formal rules, no tiered system of punishment or reeducation. Nothing. Best of all, there's also nothing the public is privy to despite funding this entire operation.

Bad referees will always be a part of the system. The question is whether the system has mechanisms to improve the overall level of refereeing and whether these mechanisms themselves are reviewed enough by the very folks who make them possible to ensure their procedural integrity and efficacy. Right now this simply does not exist. Nevada can do what it wants, when it wants and how it wants. And you Nevadans get to foot the bill. Winslow is hardly what we should be the most upset about.

I wrote about Faber after his win over Ivan Menjivar because I was impressed with his ability to rebound and indomitable spirit. None of that changes after his win on Saturday over Scott Jorgensen. The win for 'The California Kid' wasn't his best or most impressive. He fought an opponent intimately familiar with his game and did so with what he later revealed to be an injured hand. Aesthetically, I've seen better. But what I can't deny him is how his unfailing belief in himself continuously propels him to his greatest heights. We'll see what happens with Renan Barao vs. Eddie Wineland, but Faber has to be the top contender at bantamweight in line for the winner of that fight. I doubt he'll win that bout or a rematch with rival Dominick Cruz if he ever gets it, and that will define his career, too. But when Faber eventually retires, we'll never be able to say he didn't try or give it everything he had. And when a fighter's does hang up the gloves, can we ask them to have done anything more than that?

"Be pitiful, for every man is fighting a hard battle." In a game of deprivation, sacrifice, tortuous pain, monotony and profound uncertainty, seemingly insignificant moments take on the character of the grandest achievements.