This past weekend gave us plenty of storylines to mull over, whether we're talking about the startling rise of Kelvin Gastelum, the dramatic fall of Uriah Hall, or the fact that Urijah Faber is probably going to get another title shot at some point here soon. (Because, seriously, who else deserves it more?) Yet even days later, one takeaway in particular sticks with me.

While Ronda Rousey and Liz Carmouche got the ball rolling, Cat Zingano and Miesha Tate blasted it out of the stratosphere on Saturday night. Considering everything that was on the line -- second women's fight in UFC history, career-changing TUF coaching slot, automatic title shot -- that fight was perhaps one of the most exhilarating we've seen this year. The entire Mandalay Bay Event Center awoke with a purpose once Zingano appeared on the big screen, walking out to the Octagon with tears in her eyes.

Forget for a moment about the controversial stoppage. (For what it's worth, I was cageside at that fight, and the sound of those knees crushing into Tate's skull was thunderous. I have absolutely no problem with a referee saving a fighter from herself, even if it is Kim Winslow.) Those 13 minutes were everything they needed to be, and more.

"They did it again," UFC President Dana White gushed afterward. "People were texting me, people were on Twitter. People who were in bars and restaurants, stuff like that, were going crazy over that fight. It was an incredible fight.

"I love it, man. They're fantastic. And I love this division we've got. This 135-pound division, like I said when we did this, is very competitive."

Even disregarding that last bit of revisionist history, if there was any doubt after UFC 157 that the ladies were here to stay, it blew out the window this past weekend.

Mixed martial arts is now set to become the first non-Olympic mainstream sport in North America to consistently feature women on equal footing as men. And I, for one, am proud to see it.

"The women's fights don't suck," White finished with a smirk.

Zingano claims TUF spot, Tate not happy. Undefeated Cat Zingano stormed back from early trouble to finish Miesha Tate via brutal third-round TKO and earn a coaching spot opposite Ronda Rousey on next season's co-ed edition of TUF. (Video.) The electrifying match took 'Fight of the Night' honors, however both Tate and -- surprisingly -- Rousey disagreed with referee Kim Winslow's decision to stop it.

Gastelum pulls another upset. Kelvin Gastelum, the 21-year-old last pick of Team Sonnen, pulled off yet another upset, edging heavily-hyped Uriah Hall via split decision in the main event of Saturday's The Ultimate Fighter 17 Finale to win this season's TUF crown. (VIdeo.) Afterward UFC President Dana White was critical of Hall's performance, declaring, "I didn't think he showboated. I think he mentally broke."

Rousey warns women of $100,000 mistake. UFC bantamweight women's champion Ronda Rousey warned female fighters who plan to make a reality television name for themselves via TUF hijinks: "If they're the chick that's screwing around in the house, for the rest of their career they'll be known as the chick that was screwing around in that house. Sponsors are going to be looking at that, everybody's going to be looking at that. So if you think it's worth $100,000, that lay, then go for it. But I'm just going to remind them that there's going to be a lot of very permanent consequences to how they carry themselves in house."

This is about as touching as it gets.

I'd like to post the full fight of Zingano vs. Tate, because frankly it deserves to be watched over and over again. Unfortunately pesky copyright laws forbid me from doing it, so instead check out Zingano's lone appearance in Invicta FC. A must-watch if Saturday night was your introduction to "Alpha."

So Jon Jones looks like a man who's pretty much over Chael's schtick, right? You could cut the tension with a knife here.

In case you missed it, U.K. striking phenom Michael Page fought in India since we were last in this space. I bet you didn't see this ending coming.

The American version may be trending away from reality TV hijinks, but not TUF Brazil. (Click to watch the latest subtitled episode.) 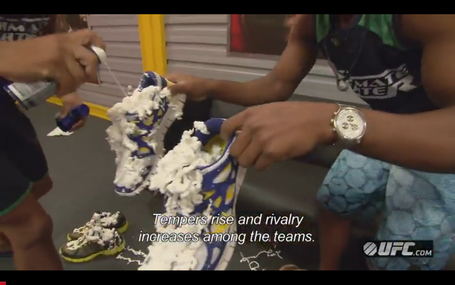 Kelvin is my hero. This is so awesome.

Wow, what a comeback from Zingano right? This was crazy!!

I called kat zingano to win. I thought the stoppage was a bit early but she did some good damage to Meisha's face @ufc

If you are on a card with girls, don't plan on winning the fight of the night bonus. Those girls always steal the show. #TUF17Finale

Wanted to congratulate @catzingano on her success, hell of a fighter, bright future no doubt, thank you for FIGHTING! #WMMA

It was an honor to make my @ufc debut and 1st win tonight!Thank you to @danawhite & @seanshelby for making this happen for me! #MMA #FOTN

Wow! It's a wrap when Fabers on the back! Your the man @urijahfaber ! Looked great out there, still getting better! Congrats! #TUFFinale

Gotta give it to Faber. He always finds a way to get the submission. Would love to see him V @one_punch next in eliminator #tuf17finale

ANOTHER WAY TO LOOK AT IT

Oh I'm fine. You know when ur buddy beats u at madden and u get mad and then u realize its cost u half a paycheck. That's how I feel.

@scottjorgensen yeah that sucks. Drinks on me tonight!

So all you haters have anything negative to say about @jacksonsmma being boring tonight?

Pt isokinetic testing wit the doc this a.m! Ready to c these results from last 4 months of physical… instagram.com/p/X2x4TkqIAD/

Today's Fanpost of the Day comes from DocCassidy, who doesn't think highly of: The next season of sexytime, Jersey Shore TUF

I realize that my title isn't fair as it's an unproduced product and isn't giving the incoming fighters the benefit of a doubt as to their professionalism and dedication. So, yes, I'm being slightly judgemental and I will have to live with myself and my punishment will be a shot of whiskey later this evening.

I can't say I'm thrilled with the mixed format of the next Ultimate Fighter season. I don't like reality shows in general, and I haven't watched TUF, regularly, since Season 12 (GSP v. Kos). I noticed the trend that the focus seemed to be more on the shenanigans in the house instead of the fighters prepping and training and I lost interest. It is entirely possible that I've missed something the last few years, but oh well. What I used to love about TUF is that it was something my whole family watched. My kids like MMA and it's because we watched TUF regularly. My wife's favorite fighters are TUF alums, because she is a casual fan and that's what she followed. As my interest waned, so did my kids, but the interst in MMA has remained and it's not uncommon for me and my girls to watch the fights together. I've made it a point as a father to make sure I expose my girls to women's sports. I always wanted them to know that there are women athletes and women athletes competing at the highest levels of competition so that they would be inspired to be involved in sports and physical activity. My oldest hates exercising and wants me to let her not do PE next school year, but at the same time wants me to take her to an MMA gym so she can kickbox. I credit her exposure to WMMA with wanting to do something physically active.

My problem with the upcoming format is that I can't help but think, because it's FOX, that they are wanting to cash in on the sexualization of female fighters. I don't begrudge Meisha Tate, or any female fighter, for posing in lingerie and doing sexy photo spreads; int he fight business, you gotta make your money where you can. I don't see anything wrong with female fighters using their good looks to get ahead and promote their career, although I tend to like the Sarah Kaufmann and Marloes Coenen types who are attractive women, but don't use that as a career promoter. That's just me, though. Overall, though, I think that the intent behind this upcoming season sends the wrong message about WMMA. The execs want drama, they want sex, they want drunken libidinous activities, and they want male and female fighters who are going to do that. But I don't. I want the best upcoming fighters in the world. I want to see the best up and coming female fighters get a chance to finally show the prime time TV audience that they are professionals and can fight. Mostly, I want to sit back with my kids and watch MMA with my kids and let them dream of being a great fighter like the one on TV. I don't want my kids to see another show that reinforces the notion that to be a successful woman you have to use your sexuality.

My initial impressions of the show are based solely on what the network and TV execs are doing. I'm really hoping that the female fighters will surprise us and rise above that intent. OTOH, who's to say that the execs won't pick a "crazy eyes" headcase with an outstanding body and overt sexuality just to get that drama? Even if we're lucky and all the women they pick are motivated, dedicated professionals who aren't interested in playing the reality show stereotype, what's the likelihood of the guys being professional and respectful?

In the end, I think the next season will have great ratings, but I also think it will be a piss poor example of professionalism in combat sports. I'm not into hyperbole so it isn't going to ruin MMA or WMMA or any of that garbage, but it's not going to help either.