Demetrious Johnson on track to return at UFC on FOX 8

It's still looking good for Demetrious Johnson to return to action at UFC on FOX 8 on July 27, however, the question still remains whether the promotion will book him on that card.

Johnson told MMAFighting.com that he now has full range of motion in his surgically-repaired shoulder (see photo above for proof). His doctor also recently cleared him to shadowbox, but he still can't hit pads or mitts because that would put too much stress on his shoulder right now. "Mighty Mouse" has started to do other exercises, though, such as squatting and leg presses.
The UFC flyweight champion underwent successful surgery last month to repair a torn labrum in his right shoulder.

Following his surgery, Johnson, 26, told MMAFighting.com that his goal was to fight on the Seattle card because he lives just outside of the area in Kirkland, WA. Plus, his wife is due to give birth to the couple's first child on July 16, so he would like to be close to home.

The UFC knows of his plan, but they have yet to tell him when he will fight next. He said he still believes he will return to action against John Moraga, the opponent he was supposed to face this weekend before he pulled out of the fight due to his injured shoulder, but that has yet to be confirmed, as well.

Johnson, who last fought in January, is scheduled to meet with his doctor in three weeks to evaluate his progress once again.

Below is another picture of Johnson, sent exclusively to MMAFighting.com, at his doctor's office showing off his improvement. 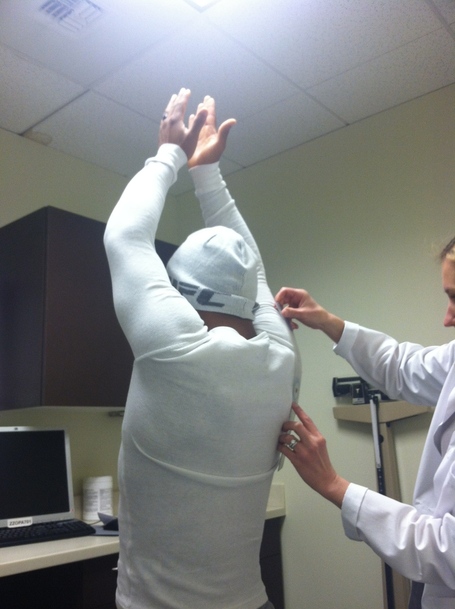