In the days following Nick Diaz's tepid loss to Georges St-Pierre at UFC 158, Cesar Gracie admitted on The MMA Hour that the demands of running a successful fight gym while simultaneously being held responsible for the careers of both Nick and his brother Nate had begun to weigh on him.

Gracie eventually came to the conclusion that he would likely have a talk with the Diaz brothers to figure out the situation. And apparently that conversation yielded results.

According a report from MMAFighting.com's Ariel Helwani on Tuesday's edition UFC Tonight, Nate Diaz has parted ways with Gracie. While he intends to still train with the Cesar Gracie Jiu-Jitsu fight team, Diaz will now be represented by Mike Kogan.

As for Nate's older brother, Nick remains insistent on retiring unless he's gifted a St-Pierre rematch or middleweight title shot. Of course. And with that, let's move to today's headlines.

Jones: Chael is a promoter, I'm a champion. UFC light heavyweight champion Jon Jones reflected back on his experience coaching The Ultimate FIghter 17 before issuing some strong words for his UFC 159 challenger. Said Jones: "Chael is in the ‘promote fight' business. I guess that's how he got in this situation in the first place. I'm in the ‘remain champion' business."

TUF 17 finals. No spoilers here, but you if don't want to know the results of last night's final episode of The Ultimate Fighter 17, you're in the wrong place. We're going to mention it several times today. Example: this absurd sequence. Check out an epsiode recap and Saturday night's newly released fight card if you missed anything.

Fighter dies in Michigan event. 35-year-old fighter Felix Pablo Elochukwu tragically passed away following a third-round TKO loss at an amateur mixed martial arts event in Michigan. An autopsy performed earlier this week was unable to determine cause of death.

White, Fox weigh-in on Mitrione controversy. UFC President Dana White said his piece on the inflammatory remarks Matt Mitrione made towards transgender mixed martial artist Fallon Fox, blaming the gaffe on the fact that Mitrione was doing an interview in the first place. (Seriously.) Fox, meanwhile, issued a brief response on the subject: "Matt Mitrione went well beyond disagreeing with the medical experts who say I should be able to compete as a woman, and personally attacked me as a fighter, as a woman, and as a human being. His comments do not reflect the spirit of our sport, where most competitors uphold values like respect and dignity."

Mir, Cormier trade words. Former UFC heavyweight champ Frank Mir vowed to take home one of Daniel Cormier's limbs at UFC on FOX 7, adding that he believes the former Olympian has been lured into a "false sense of security" since his win over Josh Barnett. Cormier responded simply, "Doesn't matter to me. I'm going to go out there and fight my fight and hoping it's promotion, because if that's the way his mind works, that's disturbing."

Today's KO Special comes to us straight from the Guillard School of Random Flying Strikes That Work But Not Really. (Fight starts at 0:50.)

The folks over at Hulu are sleeping on TUF 17 once again, so instead I offer you the latest subtitled episode of The Ultimate Fighter Brazil 2. War has been declared by both teams, you guys. (Click to watch.) 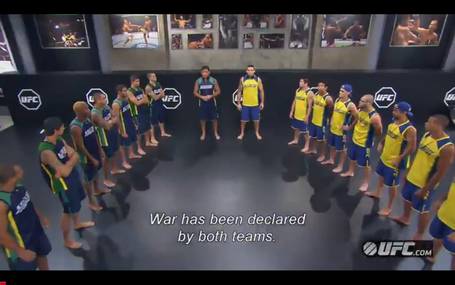 Any Conor McGregor fan should check out the trailer for Fighters Only's latest documentary: Irish MMA on the Rise. Looks like good stuff.

I'm sure Anthony Johnson is just thrilled to hear it.

Thankseveryone's for your support on this amazing journey ... It's only the beginning n I can't wait to start thanks again guys 😄

My time on @tufonfx was amazing. Loved my team & the whole experience. Congrats to @kelvingastelum on a great fight. Thanks @danawhite @ufc

@greg_stalder11 that would be @adamcellamma and I definitely wouldn't WANT to

@bubbathemenace @greg_stalder11 he wouldn't want to because I would make him tap due to hugs!!!!

The entire TUF crew! Thank u all for an amazing season @tufonfx twitter.com/danawhite/stat…

NOT MMA, BUT STILL AWESOME

Please show your support by signing this to pardon Jack Johnson. He deserves it: chn.ge/12fK8wZ

@miketyson I'm extremely proud of how u turned ur life around bro. Serves as a great example to others who feel they can't. #respeck

Still swollen but bruising coming out now! Going back for another CT scan this week twitter.com/RossTheRealDea…

THIS GUY GETS IT

Everyone come to my house. I have a new toy to play with. twitter.com/Cruickshank155…

BONES IS NOT IMPRESSED

My strength wasn't given to me by doctors it came from within.. There's a chip on my shoulder, I have something to prove

Today's Fanpost of the Day seesMikeWellman88 return with: The Aftermen: UFC on Fuel 9 Edition

Conor McGregor's UFC debut was one of the most hyped in recent memory. There were calls to put his fight on the main card, which it ultimately did end up replaying on, but the uniqueness of McGregor is that it wasn't the UFC drumming up all the hype, it was his fan base and his highlight reels, with a little help from MTV UK. Marcus Brimage said before the fight that everyone saw him as McGregor's stepping stone, and thy hype around McGregor pissed him off, but after just over a minute in the cage, I'd say Brimage believes some of the hype. ‘The Notorious' Conor McGregor landed his 10th first round finish against Brimage, with a series of scrappy uppercuts and a left that sent the ‘Bama Beast' to the mat where it didn't take much more for referee Robert Sindel to waive it off in favor of a TKO win for the Irishman. Dana White announced at the post-fight presser that Conor McGregor's next outing would come at the UFC's return to Boston on August 17th. As far as an opponent goes, the top six or so fighters at 145 pounds are all booked, and I don't think the UFC wants to rush McGregor into title contention, if for no other reason than that featherweight has about as many arguable number-one contenders as heavyweight has fighters. I'd like to see McGregor take on another winner from Fuel 9, Diego Brandao.

Fight-of-the-night at Fuel 9 went to Brad Pickett and Mike Easton, who fought from pillar to post (without cutting their eyes). They traded elbows against the fence in the first, and scrambled vehemently in the third, with Pickett sprinkling in a diverse array of choke attempts. Going in, Easton had never been taken down, and ‘One Punch' got him down four out of seven tries. Easton ate a lot more than one punch from Pickett, but stayed in it and they swung until the final horn sounded. The top 10 fighter's at 135 pounds really have a stranglehold on the division. I'd like to see Brad Pickett face Michael McDonald, or the winner of Faber/Jorgensen next.

The hardest part of Ross Pearson's night may have been his walk out to the cage. Pearson injured his foot while warming up in the locker room. This whole event has been an example of how fragile the human body is, and even veteran fighters are susceptible to unplanned, seemingly avoidable injuries. Couture had Pearson up against the fence early, with his head drilled into Pearson's chest. The head fighting in the clinch is Ryan's bread and butter, but he couldn't keep Pearson down. He was able to avoid Pearson's right hand and make it out of the first round, but Pearson found his range and the hunt began in the beginning or round number two. He finally dropped Couture with a left hook and swarmed in for the TKO. Three UFC losses in two weight classes derailed Pearson's road to contention, but his most recent two knock-outs might be a sign of things to come. The injured foot didn't stop the dropping power of both Pearson's hands, and I'd say it's time for a step up in competition for Pearson, and anyone in the top 10 at 155 would be an excellent next fight.