Remember last summer, when it seemed like middleweight was the new lightweight, in terms of depth? UFC president Dana White was raving about all hot talent getting ready to challenge Anderson Silva's hegemony.

Chris Weidman was on a hot streak, Michael Bisping appeared well on his way to finally becoming a title contender, Tim Boetsch was riding a win streak, Alan Belcher was coming off an impressive win, and if you listened to the hype, Hector Lombard was going to wipe out all the competition.

Fast forward from late summer 2012 to early 2013 and, well, not so much. Turns out the pack underneath Silva was lumped solidly together to they point they've mainly been knocking each other off and keeping each other from gaining much momentum.

When all was said and done, Weidman was the only fighter who emerged unscathed. In part that's because of the impressive five-fight win streak he's put together, and in part it's because he was on the sidelines with an elbow injury while everyone else knocked each other off. Either way, the unbeaten Weidman returns on July 6th to meet Silva in Las Vegas in Silva's first title defense in nearly a year.

Of course, in the wake of those who stumbled, other fighters have stepped up. The next to the plate, so to speak, are Luke Rockhold, the final Strikeforce champion, who meets Vitor Belfort at UFC on FX 8 in Brazil on May 18; and Costa Philippou takes a five-fight UFC win streak into an expected fight with former Strikeforce champ "Jacare" Souza.

A note about eligibility: Chael Sonnen was ruled ineligible at 185 pounds because he has stated a permanent move to 205 pounds. This differentiates him from someone like Silva, who fought a one-off bout at 205 while never intending to leave the division (or for that matter, someone like Brian Stann, who said all along his fight at 205 with Wanderlei Silva was a one-time deal). As fighters continue to jump around from weight class to weight class and cut the line for title shots, SB Nation will determine fighter eligibility on a case-by-case basis.

(Scoring: Fighters are given 10 points for a first-place vote, nine points for a second, etc., down to one point for 10th place. The results are then tallied up and presented here. Official SB Nation rankings policy: Fighters under commission suspension are ineligible to be ranked during the duration of their suspension or if they have licensing issues. This does not affect any middleweight fighters under consideration at the moment). 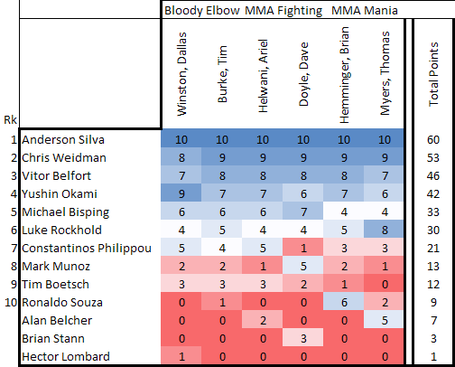 1. Anderson Silva (33-4, 60 points) What's left to say about the UFC's longest-reigning champ at this point?

2. Chris Weidman (9-0, 53 points) A near-unanimous second place pick through inertia as much as for his actual accomplishments.

3. Vitor Belfort (22-10, 46 points) TRT hangs over Belfort's success, and his visceral KO loss to Anderson Silva makes the path back to a title shot a tough one.

8. Mark Munoz (12-3, 13 points) Munoz, who hasn't fought since his brutal loss to Weidman last summer, will return against Tim Boetsch at UFC 162.