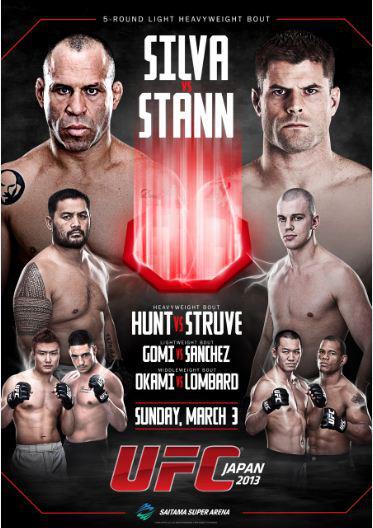 Here is another Who Should Fight Who.

Silva should fight Belfort - Reason: They fought way back in 1998, they were supposed to fight again, they coached opposite of each other on TUF Brazil. That fight apart because Vitor got injured. I think this is the perfect time for the rematch. I'm assuming Vitor will lose to Luke Rockhold and if he does then I think this fight should happen. A year ago I thought the rematch was pointless and that Silva would get destroyed but now after I watched Silva KO Stann the way he did, I'd love to see that fight. If Silva stays at 205 then he could fight Chael Sonnen, again I'm looking ahead here, if Sonnen loses to Jones then this fight could definitely happen and it would be a very easy fight to sell, this fight could actually happen at 185 or 205. I'm thinking Silva only wants big fights, there are a bunch of guys for him to fight at both 185 and 205 but Vitor and Sonnen are two likely opponents.

Stann should fight Lombard - Reason: They both just lost on the same card, they were supposed to fight each other when Lombard first signed with the UFC and it would be an all out war. I'd love to see this fight and I hope it happens. Stann could also fight Tim Boetsch or The Loser of Bisping vs Belcher.

Hunt should fight The Winner of JDS vs Reem - Reason: Hunt is on a four fight win streak and is looking better than ever, a fight against The Winner of JDS/Reem would put him in line for a title shot. It would be an amazing fight. He fought Overeem a few years ago, he lost that fight by submission. Hunt showed a much improved ground game in his fight with Struve, it was pretty impressive. I think he would do much better in a rematch with Reem. A fight with JDS would be incredible, I've wanted to see that fight for a while now. Both fights would be stand up wars. I hope Hunt gets The Winner of JDS/Reem. He could also fight The Winner of Browne vs Gonzaga.

Struve should fight Duffee - Reason: Stefan Struve, This guy is so physically gifted, hes a giant with a massive reach, if he knew how to use that reach and fight tall he could be one of the best but he hasn't yet. His striking defense isn't the best, He leaves his chin straight up in the air and keeps his hands low, thats not good. The good thing is hes still young, he really needs some good coaching, He should move to the US or he could actually just stay where he is and head over to Golden Glory. Anyways, I think the UFC will try to build up another star off of Struve's name, I think Duffee will be that guy. A big musclebound athletic freak with a ton of power in his hands, I'd love to see this fight and I can see it happening. Struve could also fight The Loser of JDS vs Reem or Shane Carwin.

Sanchez should fight Castillo - Reason: Diego looked okay in his win over Gomi, a lot of people think he lost, including Dana White so I don't expect him to get a Nate Diaz like he is asking for. I think he will get Danny Castillo, this isn't a fight in my eyes that I'm going to be pumped for but it would be a good one. Diego looked scared in the Gomi fight, he was backing up for almost the entire fight, it will be interesting to see how he does in his next fight. I hope he goes back to his old style. Sanchez could also fight The Winner of Cruickshank vs Makdessi.

Gomi should fight Guillard - Reason: Gomi looked really good in his fight with Diego Sanchez, whether you think he won or lost, there is no denying that he looked good. I'm a big Gomi fan, I love his style and I'd love to see him fight Melvin Guillard. That would be an unbelievable fight, you can't dog that fight, it would be bananas. An absolute Bangfest. I hope this fight happens. Gomi could also fight Joe Lauzon orMatt Wiman.

Lombard should fight Stann - Reason: They were supposed to fight each other when Lombard signed with the UFC but that fight fell apart but I think now is the time for that fight. They both just lost, the fight makes sense and it would be very exciting. It would be an action packed fight, I hope it happens. Lombard could also fight The Loser of Jacare vs Philippou or The Loser of Bisping vs Belcher.

Yahya should fight Bermudez - Reason: Even though it wasn't very exciting Yahya dominated that fight. I'd like to see him fight someone who can defend his takedowns a little better than Hirota did and someone who can really push him, Bermudez should be that guy. Dennis Bermudez was just in one of the best fights of the year and looked very good. I'd love to see this fight, I think The Winner of this fight would crack the top 10. Yahya could also fight Hatsu Hioki.

Hirota should fight Grice - Reason: Hirota had some hype around him, coming over from Strikeforce people thought he was very tough, Yahya showed why the UFC is #1. I'd like to see Hirota fight Matt Grice, I think that would be a very fun fight. Another guy Hirota could fight is Nam Phan.

Kim should fight Lawler - Reason: Everybody hates Kim's style, hes a grinder. I think hes a top 10 WW and I think he should get another top WW, Lawler. Robbie Lawler shocked the world recently when he knocked out Josh Koscheck, he stopped a great wrestler so lets see if he can do it again. It'll be a tough fight but I'd like to see it happen. Kim could also fight The Winner of Marquardt vs Ellenberger.

Bahadurzada should fight Alves - Reason: These guys don't seem to like each other and this fight would be absolute fireworks. I want to see it, you want to see it so lets see it. Book this fight! Bahadurzada could also fight Erick Silva.

Tavares should fight Munoz - Reason: Brad Tavares is the second best fighter that was on his season of TUF, The best is Costa Philippou. Anyways, hes really improved since the show ended, hes 5-1 in the UFC and hes beaten a couple really good guys so I think its time for a step up in competition. Mark Munoz hasn't fought since he was knocked out by Chris Weidman Last Summer. I talk about this all the time, Winners vs Losers, this is a case where I can see a Winner(Tavares) fighting a Loser(Munoz), Munoz has a big name and is a highly ranked MW while Tavares is a rising star. This fight makes a lot of sense to me and I hope it happens. Tavares could also fight Cung Le or Tim Boetsch.

Fukuda should fight Nedkov - Reason: Fukuda is a scrappy fighter, I'd like to see him fight a powerhouse like Stanislav Nedkov. That fight would be great. I hope it happens. Fukuda could also fight Andrew Craig.

Caraway should fight Kang - Reason: He looked good in his fight but he lost so I'd like to see him fight the otherBantamweight who lost on that card, Kang.

Tukodome should fight Forte - Reason: He just won but it wasn't amazing, I'd like to see him fight Renee Forte.

Marcello should fight Danzig - Reason: Marcello might get cut but if he doesn't I'd like to see him fight Mac Danzig.

Caceres should fight Viana - Reason: He keeps on winning fights, they are close fights but hes winning them, I'd like to see him fight a guy who I don't think he can beat, Hugo Viana. I'd really like to see this fight happen. Another guy Caceres could fight is Yuri Alcantara.

Lim should fight Krauss - Reason: Lim has a massive reach for a WW and he was hyped up before this fight, he looked good, I think he delivered, I'd like to see him fight Pascal Krauss. I think that would be a really good fight.