UFC on FUEL TV 8 was the definition of a mixed bag. A record-tying eight straight decisions -- four of which were split, including this notably egregious scorecard -- even had UFC President Dana White on the verge of writing off the UFC's sophomore venture to the legendary Saitama Super Arena. But then Mark Hunt and Wanderlei Silva brought us back in, and suddenly it felt like 2004 all over again.

As MMA's old guard slowly fades away, giving way to an explosive new generation, these sort of vintage nights are an increasingly scare commodity. Sooner rather than later, Silva, Hunt, and their middle-aged stablemates will have hung up the gloves for good, and we'll be left to belittle young whippersnappers about how little of a chance their new heroes would've stood against the fighters of our day.

So while it's always pleasant when a fight night reverses course so quickly, it's even better when one does so in a way that evokes fond old memories. And of course, give credit to Stefan Struve and, in particular, Brian Stann for gamely placing their own wellbeing aside to allow us these moments. Now let's get to some headlines.

Vintage Wanderlei. Former Pride champion Wanderlei Silva turned back the clock to knockout Brian Stann in the wild main event of UFC on FUEL 8. (Video.) Silva, approaching the age of 37, would've heard questions about his retirement had the night ended poorly, but instead the legend offered one more classic moment to the mixed martial arts community.

Sonnen: UFC should cut Lombard. Following Hector Lombard's loss to Yushin Okami, FUEL TV analyst Chael Sonnen advocated for the UFC to release the former Bellator middleweight champion. "You have to cut him from a business standpoint," said Sonnen. "His contract is too big."

Straus arrested. Bellator season six featherweight tournament winner Daniel Straus was arrested and taken into custody on traffic and drug charges in Fort Lauderdale, FL over the weekend. Straus faces four charges, including "driving with a suspended license, possession of over 20 grams of cannabis or 3 grams of synthetic cannabis, drug paraphernalia possession or use, and possession of MDMA (ecstacy)."

Former manager: Pride assisted Cro Cop. In a fascinating two-part interview, Miro Mijatovic, the former manager of Mirko "Cro Cop" Filipovic, revealed to LiverKick.com the myriad of ways officials from Pride Fighting Championships assisted his client, including handpicking opponents and ensuring "opponents didn't know that they were fighting Mirko until the last minute."

Johnson out for three months. UFC flyweight champion Demetrious "Mighty Mouse" Johnson, who recently withdrew from a scheduled title defense against John Moraga, will be sidelined for three months with a torn labrum, according to his coach Matt Hume.

I still can't get over how crazy these highlights are. Well done, gentlemen.

And just in case you thought you could beat Mark Hunt in Street Fighter 2, we can put that notion to rest.

Bellator 91's main event may not have been anything to write home about, but the rest of the televised card was a veritable finish-fest. If you missed anything, feel free to check out it below. (Click to watch.) 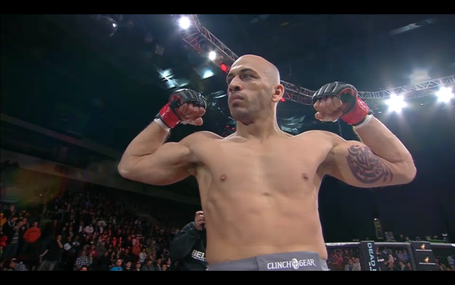 For all intents and purposes, Giorgio Petrosyan is the greatest kickboxer alive on the planet. A cold, clinical, and overwhelmingly precise striker, "The Doctor" seized his first stoppage in almost three years this weekend against ONE FC veteran Ole Laursen.

The internet, it's a wondrous place.

Are you a UFC fighter? If so, the guys at CagePotato came up with this handy diagram to let you know if your job is safe. (Click to enlarge.) 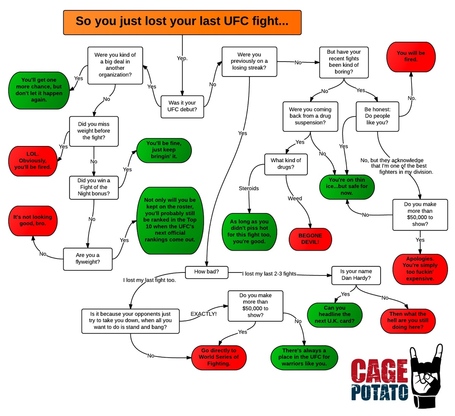 Wow, that was an insane, spectacular thing of beauty @wandfc. What a great, great fight by a great warrior.

After the career Wand had in Japan the fight Gods owed him that.That was beautiful!

Thanks for the kind words everybody, I'm going to forget about MMA for a bit and make sense of everything later. Time to go home.

Thanks my guys for all, this isa TUF job,but with you support be more easy to do,I am so happy with… instagr.am/p/WaBVfwkq37/

NIGHT OF THE SUPER SAMOAN

What a KO by Mark Hunt! The former K1 champ pulls it off! Thunder!!!

Mark hunt is the man!

Love the walk away KO !

Wow not surprised that punch broke his jaw #rallyformarkhunt

Thanks for the support everybody, I wanted Herb to take the tooth out of my cheek and continue but then it turned out my jaw was broken..

45 minutes to the hospital without painkillers.. Man, please choke me out.. Jaw is hurting like crazy.. :(

Wired my jaw in the hospital here and flying back tomorrow to get surgery as soon as we land monday in Holland, thnx for the great care @ufc

@markhunt1974 tweeting with a broken jaw sucks, first tought 1 tooth was loose and tried to get it out so I could continue lol good fight

I ment to say, look at that jaw! Painkillers are having me tripping lol twitter.com/StefanStruve/s…

yea was getting tuned up for a bit bit its been a while,everything was out,struve is a tough kat,and very tall so hard to get timing right

Next to fights hopefully save the night. BRUTAL

How the fuck did Diego win that fight!? Crazy shit

@diegosanchezufcwhat happened?! You used to move straight forward and crush guys. Too much Greg Jackson i think

Hahaha so okami has called me out. I'm real popular at the moment. Get to the back of the queue.

And that's line for our American friends.

This is MMA you can never coast the 3rd round!Never

Anytime you try and coast to a win you deserve to lose.

@danawhite I still think @bryancaraway should get his win bonus what a BS decision did you see that garbage?

DONG is really pounding away in there! #UFConFuel8

This is just too much Dong for Bahadurzada to handle.

Siyar needs to reverse this and mount the DONG #UFConFuel8

@dannyboydownes @travisbrownemma @ikevf I say the more Dong the better. Like, BINDERS full of Dong

And DONG rises to the occasion! DONG Doesn't finish but at least he didn't get any blood on him #UFConFuel8

BUNCH OF JOKESTERS IN HERE

Today's Fanpost of the Day comes courtesy of Niftu Cal, who has: A selfish wish for Wanderlei

So I'm fairly new to mixed martial arts, or at least I used to be. I didn't become a fan until the first Ultimate Fighter and I didn't start following MMA outside of the UFC until EliteXC and Strikeforce started making waves. I missed out on seeing Pride during its peak, which means I missed seeing Wanderlei in his prime. Still, I've been a big fan since his return to the UFC in 2007 and have enjoyed his past fights on the 'Best of Pride' and Youtube. I guess I'm no longer a total newbie to the sport, but it still feels like it.

Last night's fight was amazing. It was a thing of beauty and it probably took a few years off of my life. At first I got scared when Silva started trading shots with Stann, but the fear was soon replaced with... I don't know, a mix of fear and elation? I was yelling and clapping during those exchanges, went silent when his knees buckled or he staggered, and then resumed my spaz-attack when he recovered. Maybe I'm still high on the victory, but watching Silva get the TKO win felt better than the first time I had sex.

That being said, I'd like to see Silva retire and walk away on a high note. I usually hate it when fans call for a fighter to retire, but I never said that I wasn't a hypocrite. I don't think he NEEDS to retire or that he's 'outstaying his welcome.' He's still a dangerous fighter and as last night showed, he can still have great fights... but I'd like to see him hang 'em up for my own selfish reasons. I'm not saying that he got lucky with this win or that he's going to start a string of violent KO losses. I just think this would be a great point to call it a day. Last night's fight would be a great way to end a legendary career; a fight that represents the type of fighter he is and the career he's had. I'd be more than happy if he continued to fight and continued to win, but I don't think my heart could take many more fights like last night's war.

Wow, after reading what I just typed, I realized that I'd like to see Silva retire because I'm a giant wuss.