Over this past weekend, South Korean UFC fighter Chan Sung Jung, "The Korean Zombie," penned an open letter to UFC welterweight champion Georges St-Pierre. You may have seen it in yesterday's column. Within the letter, Jung politely decried St-Pierre's walkout gi, which featured imagery of a Japanese Rising Sun -- a controversial symbol for cultures who suffered under the weight of Japanese militarism and imperialism in the past, particularly China and Korea.

Luckily, it didn't take long for the situation to resolve itself.

Since Georges St-Pierre wore our walkout gi at UFC 158 we have received attention surrounding the negative connotation of the rising sun graphic used. The last thing we want is to offend or alienate anyone with the choice of design on our products.

We at Hayabusa have the utmost respect for culture and history and appreciate all of our customers worldwide. As such, we accept full responsibility for this design and are taking all complaints and comments very seriously.

The gi worn by GSP will not be brought to market. In addition, we will be very conscious of this specific design element when developing future communication materials and products.

Additionally, just a few hours later, St-Pierre hopped onto Facebook to add in his own apology.

"I'd like to also personally apologize to anyone who was offended by this," St-Pierre wrote. "I am very sorry, that was never my intention."

In retrospect, it's hard to imagine such a delicate situation being handled better by any of the three parties involved. To steal a line from Shakespeare, all's well that ends well.

Hayabusa pulls GSP gi. MMA apparel retailer Hayabusa nixed plans to market Georges St-Pierre's UFC 158 walkout gi, which featured a Japanese Rising Sun, after UFC featherweight Chan Sung Jung penned an open letter denouncing the controversial imagery. "We accept full responsibility for this design and are taking all complaints and comments very seriously," read an official statement. "In addition, we will be very conscious of this specific design element when developing future communication materials and products. Please accept our sincerest apology for any offence this has caused." In addition, St-Pierre issued a personal apology for the oversight.

Guillard not welcome back at Jackson's. Despite tweeting his return to Jackson's MMA, struggling UFC lightweight Melvin Guillard may not be welcomed back at the Albuquerque based camp, according to several reports. To make matters worse, Guillard is apparently facing assault charges in New Mexico as well.

Fox to fight. Transgender fighter Fallon Fox signed a bout agreement to compete in Championships Fighting Alliance's featherweight tournament on May 24 in Florida, as expected. Fox's scheduled opponent, Allana Jones, is currently undecided whether she will accept the match.

Lembo explains WSOF troubles. Nick Lembo, counsel for the New Jersey Athletic Control Board, revealed the series of problems that nearly led to the last-second cancellation of World Series of Fighting's sophomore show.

St-Pierre lands role in Captain America 2. According to a report from Latino Review, UFC welterweight champion Georges St-Pierre is set to play the villain Batroc the Leaper in the upcoming Hollywood sequel to Captain America.

If you only watch one video today, I urge it to be this one.

In case you missed it over the weekend, seeing Tyrone Spong bring the thunder for GLORY is definitely worth your time.

Marina Shafir is Ronda Rousey's roommate, training partner, and a fellow world class judoka. She also decided to try her hand at MMA. Through two amateur bouts, Shafir was 2-0 with two first-round armbars. No joke. Her third fight took place over this past weekend. This is the result.

Oh, yeah. I almost forgot. This little slice of brutality happened at that same event. (For the lazy, jump to 1:55.)

UFC lightweight champ Benson Henderson is a big comic book buff. His favorite character? Cable, from X-Force (an X-Men spin-off). So it's only fitting that Scott Cohn and our friends at Fighters Only offered us this mash-up of the two powerhouses. 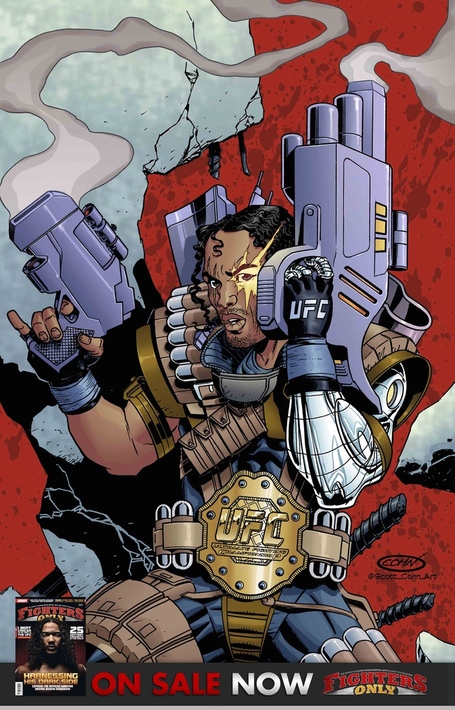 THE RETURN OF SHAMROCK

It is going to be my redemption! Tour i am going to make a statement for all the bad fights i have (cont) tl.gd/lcq9ks

Well i am going to fight ian just trying to see the proposal make sure that everybody is happy on (cont) tl.gd/lctfp4

I totally wanna wrestle Hulk Hogan. There, I said it. Not taking it back.

The worst matts I have ever seen in my life instagram.com/p/XQeCT8xfHp/

THE MORNING REPORT APPROVES THIS MESSAGE

@danawhite I know you like gambling.Me vs GSP $1000 a takedown at the @ufcfanexpo, I will give you 3-1 odds!

@danawhite I realize those odds I have you last night were not fair.How does 5-1 sound?

Today's Fanpost of the Day comes to us from Tyler Keane, who believes: WSOF Needs "Something"

After the mixed bag that was Saturday night, it is pretty clear that the World Series of Fighting needs "something." In the aftermath of WSOF 2, the major sentiment regarding the promotion was the need to balance the few emerging prospects and abundance of UFC castoffs. (Not to mention the Arlovski glove embarrassment.)

What the World Series of Fighting needs is a way of differentiating themselves. The promotion needs an identity. Any casual fan that flipped over to the NBC Sports Network Saturday night could have very easily confused the action for the UFC. Maybe that is what they are going for or maybe not. But if they hope to establish themselves as a long term player in the fight game, they will need to make some changes.

In order to establish your brand in a market where the top brand is almost synonymous with the sport is a daunting task. Bellator has made a valid attempt to do so but creating what they term to be "the toughest tournament in sports." WSOF needs to think outside the box. Below are a few ideas that could help to develop the identity of the World Series of Fighting.

Fighter standings/rankings based on record - Set up standings similar to the 4 major sports where fighters are ranked based on their record in the promotion. It could help create a clear understanding of rankings and matchups based on those standings. Granted, it might be difficult to do right away based on the fact the promotion has only had two shows.

Fan voted matchups - A very easy, different way to draw attention to the promotion. Fans can vote online for what matchups they want to see for an entire main card. If it works, and that could be the WSOF's tactic. Dana White always says the UFC puts on the fights that the fans want, but the WSOF could actually do that.

One night, four man tournaments - The strategy has been done before but it could be a way create some buzz for the promotion. The idea of "winning the World Series of Fighting" could prove to be a solid strategy.

Include jujitsu and kickboxing matchups or tournaments - This idea is the least likeliest to occur but bear with me. The roster of fighters for the WSOF is not very deep; some may call it shallow even. Events such as the World Series of Poker include various types of poker. So why not include other types of fighting? It will deepen the promotion's roster, create a different type of event and possible even educate MMA fans on different aspects of fighting.

Any or all of these changes depend upon the willingness of Ray Sefo and the other WSOF executives to take risks. Decisions made in the coming months could prove telling whether the World Series of Fighting goes by the wayside like the Afflictions and IFLs of the world or if they can turn themselves into a viable alternative in the fight game.