At first glance this past weekend seemed rather sparse, with World Series of Fighting left to the fly the lonely flag for major league MMA. But the reality is, that couldn't be further from the truth.

First we had a UFC champion competing in one of the year's biggest BJJ tournaments, which almost never happens. Then we saw a top-flight MMA prospect dropping the hammer out east for GLORY. And finally, the stars of tomorrow battled it out in the gruelingly real version of March Madness. Considering all of that, there was more than enough action to go around. So just sit back, and let's catch up on everything you may have missed and everything you want to see again with some headlines.

Guillard leaves Blackzilians. Struggling UFC lightweight Melvin Guillard announced on Twitter that he left the Blackzilians to rejoin his old stomping grounds at Jackson's MMA. Guillard racked up a dismal 1-5 record during his time with the Florida based camp.

Moraes flattens Nam. Bantamweight up-and-comer Marlon Moraes knocked out Tyson Nam with a head kick midway through the first round in the co-main event of WSOF 2.

Spong KOs Bojansky. A nine-month layoff didn't mean much for Tyrone Spong. The Blackzilian crushed Remy Bonjasky with a right hook in the headlining match of Saturday's GLORY 5 London event.

If you missed out on Arlovski vs. Johnson the first time around, feel free to catch it below.

No sound on this one, but if you didn't catch what Brenson Hansen did to Tom Marcellino on Saturday night's undercard, you need to check this out.

Peggy Morgan is currently fighting in the same women's featherweight tournament as Fallon Fox. This is her response.

Props to @pegson for the find.

Gems like this are why I love putting together this column everyday.

Okay, this one is pretty gruesome. Don't say I didn't warn you. (Jump to 3:30 to see the beginning of the end.)

All Danny Mainus wanted to do was fight at RFA 7. Unfortunately, Michael Schiavello's accent did him no favors.

Was Andrei Arlovski actually wearing a UFC glove for his WSOF fight? Yes. Yes he was. 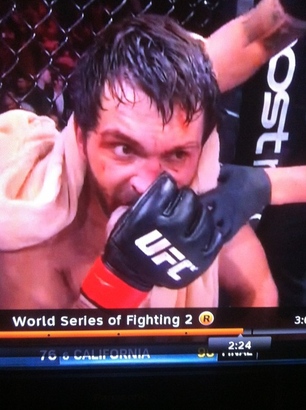 Our good friend Kyle Haase offers a glimpse at the superfight that never will be: Dana White vs. Vince McMahon. To check out more of Kyle's work, visit his deviantart or hit him up on Twitter. 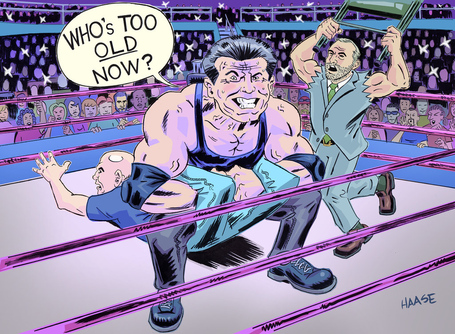 PROS REACT TO RUMBLE VS. ARLOVSKI

Congratulations @anthony_rumble on the VICTORY!!! Way to push through!!! #RawPower

I enjoyed that fight. Rumble earned it

Congrats @anthony_rumble for the great win...

Anthony Johnson fought at so many weight classes , that he could have his own game show called "Name That Weight"

Not sure if its cool weird or crazy, but rumble just beat arlovski N weighed app. 76 lbs more than me at our last weigh ins. (NOT AN EXCUSE)

Take a look into the mind of @gesias *WARNING, GRAPHIC PHOTO FOR THE SQUEAMISH* tmblr.co/Z5KIJyh2mNfr

WHY DAN HARDY WON'T BE FIGHTING

Sorry guys, I couldn't be more disappointed. Turns out I have a wolf heart and the California commission won't clear me to fight...

Wolf heart = two heart beats. It's an evolutionary enhancement and the commission see it as an unfair advantage.

@iamtheimmortal sorry brother, I was really looking forward to scrapping with you. Perhaps some other time. Good luck with training.

I'm either having a breakthrough or a breakdown... either way, I'm quite excited! Situations like this stimulate growth in a person.

How does that look...? Yeah, this is definitely a breakthrough. Things are going to get really interesting now!

Today's Fanpost of the Day comes from RaTheGod, who gives us: The Korean Zombie's open letter to GSP!!

UFC featherweight sensation Chan Sung Jung, aka "the Korean Zombie," pens an open letter to welterweight kingpin Georges St-Pierre, concerning the gi that he wore at UFC 158. Specifically the historical connotation of the "Rising Sun" design as it pertains to Koreans. The letter can be found at https://www.facebook.com/koreanzombieMMA

"Hi, My name is Chan Sung Jung from South Korea. As one of many Koreans who like you as an incredible athlete, I feel like I should tell you that many Korean fans, including myself, were shocked to see you in your gi designed after the Japanese 'Rising Sun Flag'. For Asians, this flag is a symbol of war crimes, much like the German Hakenkreuzflagge. Did you know that? I hope not.

"Just like Nazis, the Japanese also committed atrocities under the name of 'Militarism'. You can easily learn what they've done by googling (please do), although it's only the tiny tip of an enormous iceberg.

"Furthermore, the Japanese Government never gave a sincere apology, and still to this day, so many victims are dying in pain, heartbroken, without being compensated. But many westerners like to wear clothes designed after the symbol under which so many war crimes and so much tragedy happened, which is ridiculous.

"I know most of them are not militarists. I know most of them do not approve unjustified invasion, torture, massacre, etc. They're just ignorant. It's such a shame that many westerners are not aware of this tragic fact. Wearing Rising Sun outfits is as bad as wearing clothes with the Nazi mark on it, if not worse.

"Since you're influenced by Japanese Martial Arts, your wearing a headband designed after Japanese flag is understandable. But again, that huge 'Rising Sun' on your Gi means something else.

"Many people say GSP is the best Welterweight fighter throughout history, to which I totally agree. This means you have a great influence on every single fan of yours all around the world. And I do believe your wearing 'the symbol of War Crime' is a very bad example for them, not to mention for yourself.

"So, what do you reckon? Do you want to wear the same Gi next time as well?"