Poor Dominick Cruz. The UFC bantamweight champion's knee issues have kept him out so long that not only did the UFC crown an interim champion, but the man who won it, Renan Barao, is slated to become the first interim champ in UFC history to defend his title twice.

And while there's no lack of sympathy for the champ, who's a heck of a fighter, an articulate spokesman, and generally regarded as an all-around good dude, this is a sport which marches forward at a merciless pace. Consider that Junior dos Santos, who was ranked No. 5 in the last SB Nation pound-for-pound MMA rankings poll, didn't receive a single vote this time around after his loss to Cain Velasquez, despite going 10-1 with eight stoppages in his past 11 fights.

The "What have you done for me lately?" vibe has hit Cruz as well, who has been out of action since Oct. 2011. The new poll marks the first time Barao, who finished Michael MacDonald to improve to 30-1 (1 NC) and will defend his interim belt against Eddie Wineland in June, has finished ahead of Cruz in the poll. Barao clocked in at eighth and the 20-1 Cruz ninth.

The top four -- Anderson Silva, Jon Jones, Georges St-Pierre and Jose Aldo Jr. -- have pretty much been etched in stone for the past two years, and are likely to stay that way until someone loses. But otherwise, there was plenty of movement in the top 10. Dos Santos dropped out, as did both Frankie Edgar and Dan Henderson, who frankly seemed to be ranked based on what I call "The Fedor Effect," in which a fighter stays ranked based more on past accomplishments than where they actually stand in the sport at the moment. Taking their place are Velasquez, who finished sixth, Barao, and a tie for 10th place between Johny Hendricks and Gilbert Melendez. 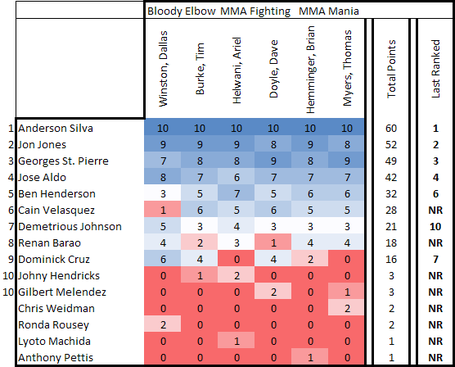 1. Anderson Silva (33-4, 60 points): Faces an opponent in Chris Weidman who will have been out a year, suffered a training injury, and whose biggest win is Mark Munoz. Such is the state of the middleweight division in 2013.

2. Jon Jones (17-1, 52 points): By taking a fight against a converted middleweight, Jones is in a position where only a swift and decisive finish of Chael Sonnen is going to suffice.

3. Georges St-Pierre (24-2, 49 points): Was his performance against Nick Diaz in the second half of their fight a matter of GSP going into the fight ill, as his camp claims, or is it the first hints the champ might be starting to age?

5. Ben Henderson (18-2, 32 points): Henderson has his chance to slow the momentum of Strikeforce crossovers with his April 20 bout against final Strikeforce lightweight champ Gilbert Melendez.

6. Cain Velasquez (11-1, 28 points): Sure, it's hard to see how his title defense against Antonio Silva will go any differently than the first time they met, but, the champ needs to stay busy before the inevitable JDS trilogy fight.

7. Demetrious Johnson (17-2-1, 21 points): The UFC's most active fighter is finally slowing down a bit, as he recovers from shoulder surgery.

8. Renan Barao (28-1, 1 NC, 18 points): Barao's rightfully the favorite for his June bout with Wineland, but the former WEC bantamweight champion is a tough out against anyone.

10t. Johny Hendricks (15-1, 3 points): Win four in a row over the likes of Jon Fitch, Josh Koscheck, Martin Kampmann, and Carlos Condit, and you've stated your case for top-10 consideration.

10t. Gilbert Melendez (21-2, 3 points): Melendez is unbeaten since 2008, but he'll also be facing a prime Benson Henderson after sitting out nearly a year.