Alex Caceres recently had a win lopped off his record, on top of receiving a six-month suspension, simply for having marijuana metabolites in his system. Before him, it was Matt Riddle. Before Riddle, it was Thiago Silva. Before Silva, it was -- eh, you get the point.

These days overzealous punishments are being handed out like candy, halting the career of any fighter who dares test positive for marijuana. Just look at the case of boxer Julio Cesar Chavez Jr., who, along with his nine-month suspension, received a grossly unreasonable fine of $900,000 for his penance.

UFC Vice President of Regulatory Affairs Marc Ratner has a lengthy history with state commissions, and on Thursday he spoke to the mother of them all -- the Nevada State Athletic Commission (NSAC) -- about the need to revisit what he believes to be an increasingly archaic rule.

"Society is changing," Ratner said to the NSAC (via Bleacher Report). "It's a different world now than when I was on the commission. States are legalizing marijuana and it's becoming more and more of a problem with fighters testing positive and the metabolites.

Several attending commissioners agreed with Ratner's sentiment, electing to research and discuss the matter further at an upcoming meeting.

Ratner talks to NSAC. UFC Vice President of Regulatory Affairs Marc Ratner publicly requested the Nevada State Athletic Commission revisit its policies regarding marijuana. Said Ratner (via Bleacher Report): "Society is changing ... I just cannot believe that a performance-enhancing drug and marijuana can be treated the same. It just doesn't make sense to the world anymore, and it's something that I think has to be brought up."

Bellator 93 results. 33-year-old lightweight Dave Jansen edged Marcin Held to win season seven's tournament title along with a guaranteed title shot against Michael Chandler in the main event of Bellator 93. On the undercard, U.K. sensation Michael Page needed just 10 seconds to live up to his hype.

Emelianenko ends retirement. Don't get to excited by that headline, folks. Former Pride FC heavyweight Aleksander Emelianenko, not Fedor, ended his retirement to ink a long-term contract with Russian mixed marital arts promotion ProFC, according to a report from Sherdog.

St-Pierre vs. Hendricks odds. UFC welterweight champion Georges St-Pierre opened as a 2-to-1 favorite (-225) over No. 1 contender Johny Hendricks (+175) in advance of the pair's title bout.

VADA offers UFC free testing. According to Dr. Margaret Goodman, the Voluntary Anti Doping Agencey (VADA) has an offer on the table to "oversee an extensive blood and (random) urine testing program for [UFC] fighters." The proposed program will be free to the UFC for at least the first year, with the only expenses coming via collection fees and testing panels.

Rebecca Forsyth is a 14-year-old grappling champion who not only defeated boys during her run to the title, she also did it with armbars. So naturally Ronda Rousey gave her a call.

It's official. South Koreans have us beat in the promo-making department. (And yes, there's one for "Stun Gun" too.)

If you've overlooked WSOF 2's bantamweight co-main event, you should probably check this out.

Quick poll: Did Jon Jones let Cella get that?

John Dodson's response might be the least surprising thing I've heard from this entire series.

This radical MMA collage you see in front of you comes to us courtesy of Chris Morkaut. Check out his website or hit him up on Twitter to see more of his work. 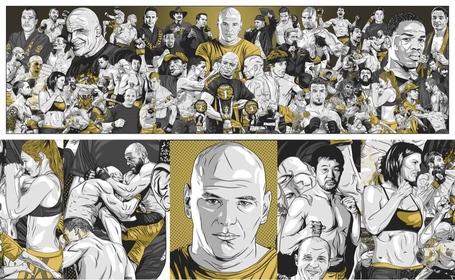 Props to @chicagomcgovern for the find.

Thank u all4the support Doctor just told me tht there was no contact to the groin&tht he diagnosed a panic attack is what he suffered.

The guy who sold this to me today said I should eat one and then snort another ... Wtf. I'm sick so… instagram.com/p/XINYCuzFq4/

Thank you @hbo & Game of Thrones for the coolest gift ever! I'm so beyond pumped for the 3rd season! instagr.am/p/XGEQ0vJyBE/

There will be no more lines to remember come April 27th.

I was going pee and I had to sneeze, not only did I piss all over my shoes but I also sneezed on my balls. #Epicfail.

Today's Fanpost of the Day sees The_Mack_Attack ask: Can Olympic Wrestling be Saved?

It comes as a hard pill to swallow for many wrestling practitioners around the world and the millions of fans who follow the sport. When news filtered through on February 12th that the International Olympic Committee (IOC) will remove Greco-Roman and freestyle wrestling from its "core" sports for the 2020 summer games, a worldwide response of anger was heard rather swiftly. While many protest its future exclusion from the worldwide competition, it begs the question, can Olympic Wrestling be saved?

First we have to look at the reasons for the removal of the sport and the lack of one given by the IOC. With the decision made by the 15 members of the executive board in a secret ballot, with no definite explanation given in a statement afterwards, it only adds more anger to the worldwide riot it's causing. It's certainly not an issue of sparse athletes, the London 2012 Olympics counted 71 countries in the wrestling bracket. It's also not an issue of funding, with athletes not needing much gear while competing, if anything they should be wearing more to make sure children don't go to bed with nightmares.

What it really comes down to is commercialism and the supposed lack of attention Olympic Wrestling brings to the table. During the London Olympics, wrestling viewership figures fell behind many of the games other sports. While the sport does have its die-hard viewers, it's nothing compared to those who tune in to watch Swimming, Track and others high-profile sports. If this is the main reason for the sport's removal, then the IOC have lost grip of what the Olympics is all about and somewhat blind to the heritage wrestling brings to the core of the competition.

We have to also take into account the effect it will have on countries who's main medal tally comes from the sport of wrestling. Many Eastern European countries do strong in all specialist wrestling groups, Georgia managing to take home seven wrestling medals from London, Azerbaijani wrestlers also picking up seven and Iran winning three gold medals from the six they picked up. Discontinuing the sport will only hurt the future pool of wrestlers who won't see a future in wrestling with no motivation of a gold medal at the end of the tunnel and also in the long run it will cut funding to the sport for others that still exist within the Olympic Games.

So how do we save it? The wrestling community has already done a great job implementing the first step, which is getting everyone talking about it. Strength in numbers is always a big plus and their voice will only get more louder the more people join the movement. The use of social media has always been a great help to share everything and anything around the world, no matter how stupid it is, if you pop it on Facebook or Twitter, people will see it. Some have already taking this avenue, setting up a "Save Olympic Wrestling" Facebook page to try help out the cause.

Only time will tell how the "Save Wrestling" campaign will play out, or if the IOC will even take notice of the arms that have raised in disagreement. Everyone will need to play their part, fans most keep showing support for the sport they love, while those in power in States around America and countries around the world need to pull their power to try sway the IOC's decision.

I certainly don't want to see the great talent that stems from the wrestling sport stop flowing into the Mixed Martial Arts world, do you?