A calm Monday is always a nice respite after the bustle of a big fight week. And yes, that counts double after last week's Diaz drama-coaster. So as we twiddle our collective thumbs awaiting April's four-week, four-event UFC hurricane, won't you join me as we settle back into the swing of things with some headlines?

Tate wouldn't fight Fox. UFC bantamweight contender Miesha Tate told ESPN that she wouldn't be willing to fight transgender fighter Fallon Fox. Said Tate: "I have nothing against transgender people. You should live your life however you want. It's about fighter safety. I wouldn't feel comfortable getting in with someone who is a woman but developed as a man. I just don't think it would be safe."

Gracie, Zahabi react to weekend. Cesar Gracie responded to the potential retirement of his pupil, Nick Diaz, along with UFC President Dana White's suggestion that Diaz would be better off without Gracie as his manager. Meanwhile, Georges St-Pierre's trainer, Firas Zahabi, addressed UFC 158's hand wrap controversy before revealing that St-Pierre was running a slight fever on fight day.

Diaz okay after police tweet. After a rough weekend in Montreal, Nick Diaz tweeted out a now-deleted photo of Diaz sitting on the sidewalk next to police cruiser -- joined by the caption, ""F---, they got us :(" -- followed by two more photos and captions on Instagram. According to TMZ, "Diaz 'was never arrested and was released without incidents from the scene," however the driver of the car and another passenger weren't so lucky.

Estima 'disappointed.' BJJ star Braulio Estima explained the chain of events that led to his unsavory exchange with Nick Diaz and Kron Gracie after UFC 158.

"Only if God tells me to come back. No other way." -- Fedor Emelianenko on coming out of retirement.

Tonight's episode of The Ultimate Fighter 17: Team Jones' Bubba McDaniel vs. Team Sonnen's Kevin Casey in this season's wildcard match. (Also, to steal a quote from YouTuber Igor Brown: "Chael looking like his head was going to explode with the amount of DUI jokes he had in his mind when the breathalyzer﻿ came out.")

Remember that double KO from last week? Now you can relive it without that awful, grainy cell phone footage. It's going to be a good day.

Something tells me Michael Pastou didn't get all these rides from his TUF Smashes income. (Also, Brad Pickett needs his own show. Make it happen, people who make things happen.)

Over 300 welterweights tried out for the cast of TUF Brazil 2, which is coached by Brazilian heavyweights Antonio Rodrigo Nogueira and Fabricio Werdum. 28 prospects ultimately made the cut, and this is a behind a scenes look at that process.

This was a sign outside in the Rosemont area of Montreal over the weekend. Good idea, perfect execution. MMA Fighting scores it 10-out-of-10. 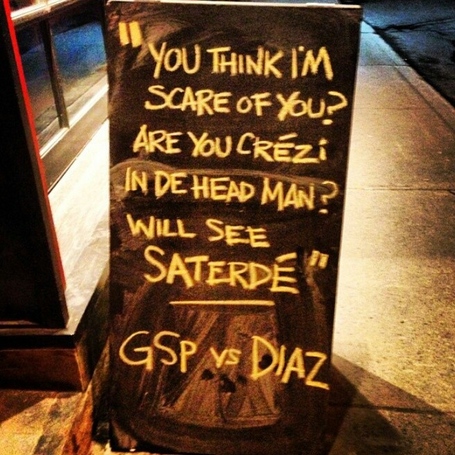 Props to Hugues Charron for the find.

CHAMP ON THE MEND

Congrats to @darren_elkins An honour to do battle with you in the octagon! Gr8 talking to you and your team after the fight. Cheers!

Thanks to everyone for all the kind and positive messages! Defeat always hurts. That said, I will get back on the horse again. Cheers!

My decision will be based on a number of factors, including the health of my eye, which has yet to be determined.@ufc @arielhelwani

It feels gooooooooood to be able to chew again! :) Feeling great again folks and very motivated for my next fight! Back 2 the gym next week!

Prindle backed out.... fight is off!This sucks but @bellatormma & @bjornrebney are gonna take care of me;)being a fighter is tough

Chael.RT @erik_levesque: @danhendo who do you think has the best wrestling in the UFC besides you of course ha?

Today's Fanpost of the Day comes from heavyfl0w, who writes: UFC 158 Postfight Thoughts: Hendricks, Condit, Cruickshank, And The Death Of "Fatrick"

This article will not mention Georges St-Pierre's title defense, other than to say that I have never paid taxes in my life. I always wanted to release that information to a public audience for no reason whatsoever. However, here are some thoughts I had about the card ...

- I was totally wrong about Patrick Cote at 170.

When I heard that my man Patrick was dropping to welterweight, I had serious doubts that he could even make 170. I mean, this was a guy that was famously nicknamed "Fatrick" by his teammates, and he wasn't exactly cut up at middleweight. On top of that, he was dropping down to a weight class that was chock full of excellent wrestlers, far from the wide open field that middleweight offered.

I realize that a win over Bobby Voelker doesn't exactly mean much in the grand scheme of things, but I thought he came in shape, and you noticed the speed advantage that he had right away. Fun fight.

- It must be frustrating to be a fan of Daron Cruickshank.

While watching the Makdessi-Cruickshank fight, I came up with a term for Cruickshank and guys like him; I call them "Look what I can do!" strikers. In other words, guys who have no grasp of when to throw strikes, no interest in setting them up, and no semblance of strategy to their games ... but hey, wanna see a gorgeous, technically sublime wheel kick that was thrown at a really weird time? Look what I can do!

During the fight, Joe Rogan dusted off one of his favorite meme's. He said "Makdessi is making Daron think." And I thought, "I don't think Daron is thinking. That's why he's going to lose this fight."

If you're going to plod forward towards Cruickshank with wild punches, he'll definitely make you pay for it. But a good game plan and opportune striking can just as easily throw him off. Good performance by John Makdessi, who showed off an improved sprawl and some nice punches.

- Yves Lavigne isn't the worst ref in MMA, but he might have the worst lowlight reel of baffling stoppages.

Oh, Yves. Why must you do these things?

It had been awhile since Yves had taken our breath away with a bulls--t stoppage, and I don't know about you, but I felt the void. It was palpable. It was like something real and meaningful was missing from my day to day life. Where were the Pete Sell-Matt Brown-esque atrocities? Here was one.

The stoppage of the Darren Elkins-Antonio Carvalho fight reminded me of an old school UFC stoppage, in which John McCarthy would just dive in and intervene at the first sign of trouble. People complain about referee stoppages now, but go back and watch some old UFC fights and check out how bad some of them are. Oh, you're bleeding? Fight stopped. You got dropped? Fight stopped. You gained mount and landed 4 punches? Fight stopped. Completely reactionary. That's what this was. Elkins landed a right hand that hurt Carvalho, but he covered up and appeared to be on the road to recovery when Elkins floored him with another right hand. Carvalho popped up immediately, but Yves had already done his damage.

Sometimes, a guy will protest a stoppage, but his eyes betray him by going all Stuart Scott. Not here; Carvalho was completely fine. Oh well. Thanks for losing Antonio Carvalho some money, Yves.