Saturday night's UFC 158: St-Pierre vs. Diaz in Montreal, Quebec, Canada brought us a demonstration of just how capable the upper echelon of the UFC's welterweight division can be. Strong performances by post-fight bonus winners Jake Ellenberger, Carlos Condit and Johny Hendricks - to say nothing of the champion Georges St-Pierre - showcased why 170 pounds is one of MMA's premier divisions.

Yet, there were some questionable stoppages, bad decisions, and boring fights that had zero business taking up space on the pay-per-view portion of the card.

That means it's time to separate the winners from the losers, the best from the worst and the signal from the noise.

More often than not, elite talent in competitive bouts with high stakes will perform very ably and entertain along the way. Nowhere was that more clearly on display than in Saturday's unofficial welterweight grand prix. While the victory in the main event wasn't as scintillating as the entirety of the two welterweight bouts that preceded it, the common theme among them all was the extraordinary level of craftsmanship in the fights. That's true largely for both winners and losers. In those sorts of circumstances and in the call to action a tough bout provides, superb talent will do all manner of things amazing and exciting. I like a wild, non-technical slugfest every now and again, but for my money, they can't win awards for being the best the fight game has to offer when compared to, say, Saturday's co-main event.

This is my favorite. Prior to the fight, there were legions of Diaz fans who insisted their favorite fighter's style would be problematic for the champion. Note: these people are not the majority of MMA fans necessarily, but they did exist and they did say those things. Over and over, in fact.

Fast forward to the decision win in the main event. When I noted on Twitter my surprise at Diaz fans asking for this fight given the way it would logically and did play out, they greeted me with rather delicious backpedaling. Some suggested they just wanted to see their guy get the chance at GSP, which I'm sure is true. Not every Diaz fan insisted he would win and frankly speaking, there's nothing with doing that. If you're a fan of someone because you like or believe in him, you should say as much.

The problem is that one shouldn't pretend they were never invested in Diaz's chances or deny that many fervently flew the 209 flag not merely out of allegiance but of the vocal belief he'd be victorious by taking away GSP's weapons. Most observers saw what actually happened coming a mile away. We don't get points for being prescient, but we do get credit for being consistent.

Most in Denial: GSP fans and me

Listen, GSP is still ultra-dominant. Diaz is one of the best fighters in the sport irrespective of weight class and he was completely shut down. That kind of achievement doesn't earn the praise it should because St-Pierre makes it look almost effortless. However, for the first time, the champion appeared to me to be ever so slightly aging. He's not old by any stretch of the imagination and I'm not convinced Johny Hendricks is the guy to take the title from him. But St-Pierre was physically ineffectual in real, noticeable ways this time out. The timing and authority on his takedowns quickly waned. His jab had a nice pop, but the continued monitoring of the clock was worrisome. I was impressed by his physical control on the ground, but surprised by the absence of his normally flawless conditioning. I do not attribute any of this to having an 'off' night. He was on, but only as on as he could be.

Again, all of this is to say he's insanely talented and may well rule the division for this year and even years to come. But it's also time we acknowledge physical decline - even if it ultimately may not affect his MMA record - may be upon him.

As for my mea culpa, it turns out I may have badly misread the level of buzz and enthusiasm this fight generated. Leading up to fight week, I didn't get any sense this was going to do numbers and pay-per-view sales beyond what the typical GSP fight pulls. That is, it was going to do a lot because GSP does a lot, but it wouldn't do significantly more than what he can normally be expected to pull.

There are no numbers in yet, but all indications are that this is a very strong performance even by GSP standards. If so, I'll have to cop to being blind this time out. I believed the rivalry to be phony and didn't see a ton of evidence to suggest casual fans were rallying behind it even if I had to acknowledge business priorities are what gave Diaz the fight in the first place. 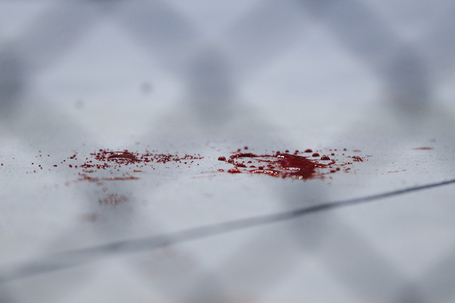 This is a shot of Dan Miller's blood after Jordan Mein gave him the metaphorical wood shampoo. I like this picture because of how thick the blood looks, as if there's thicker material to be pulled from the deepest vein. It's also pooling without spreading. The depth of it speaks to the particularly violent beating Mein turned in. There's also a natural arrangement and geometry to the entire thing. Check out the entire gallery if you missed it.

I could've done with the first two fights on the main card being anywhere near the main card (less so for Nick Ring vs. Chris Camozzi, though). It's true there's often no telling in advance which fights will pop, but generally speaking, better fighters in bigger stakes turn in better performances. Moreover, hometown favorite Ricci's placement on the main card probably didn't meaningfully sell tickets in any way that he wouldn't have done anywhere else on that card.

UFC wants to promote their TUF products and they need to exit off of FX with a bang. Fair enough. But there's no such thing as a free lunch. If you're that committed to selling fighters with limited upside, then you have to accept that's more important than creating a properly curated main card product. Worse, were there fights in any way an endorsement of the TUF system or a way to meaningfully attract interest to the show? I'd submit that, if anything, those fights achieved the opposite.

Highly Enjoyable to Watch: The Strong Performances of Strikeforce Transfers

From Bobby Green to Bobby Voelker, one of the most pleasantly surprising turn of events has been the competitive success of Strikeforce transfers in the UFC. UFC President Dana White attributes their success to them being 'hungry' after the promotional deprivation they suffered through as Strikeforce died a miserable death. I think that's probably true, but isn't totally explanatory. What we're witnessing is certainly fighters who are rising to the occasion, but are also better than what we once thought. That's been true largely not just of this wave of Strikeforce fighters, but from those who've made the move since the organization was acquired by Zuffa.

There've been some busts from Strikeforce after moving to the UFC. There's been some under performers who came from Bellator. Not everyone acquired is criminally underrated. But maybe the lesson here is our sense of hierarchy among fighters and divisions is too biased in favor of institution or organization. If these Strikeforce fighters have proven anything, it's that the landscape isn't as locked in stone as we once believed.