The potential for chaos loomed large over this past weekend. Despite the usually steady hand of Joe Silva, the chance for us to be sitting here marveling at a new wildcard of a UFC champion with no clear-cut contender to fight him was very real.

But instead, the more things change, the more they stay the same. Georges St-Pierre is still the belt-holder, another dominant performance etched into the history books, and Johny Hendricks is still the No. 1 welterweight contender, albeit with perhaps the most impressive résumé of any challenger in the St-Pierre era. So let's digest it all and get to some headlines.

St-Pierre handles Diaz. UFC welterweight champion Georges St-Pierre dominated all five rounds against Nick Diaz to retain his belt in the main event of UFC 158. (Video.) The loss led Diaz to retire, if only briefly, before requesting a rematch or a duel with Anderson Silva. St-Pierre took the opportunity to advocate for more stringent drug testing in MMA, while UFC President Dana White claimed that the pay-per-view was already trending towards a monster buyrate. Nonetheless, not all of the pros were impressed with St-Pierre's dominance, including a certain Bellator champion.

Hendricks edges Condit. The risk paid off for Johny Hendricks, as the bearded four-time All American fought through a broken left hand to edge Carlos Condit in the electric co-main event of UFC 158. (Video.) Afterward an exuberant Hendricks called the win 'amazing,' and to the surprise of no one, Hendricks is now set to receive the next shot at St-Pierre's belt.

Rousey to coach TUF. UFC women's bantamweight champion Ronda Rousey will coach both women and men 135-pounders on the next season of The Ultimate Fighter, opposite the winner of Miesha Tate vs. Cat Zingano.

Ellenberger crushes Marquardt. Top-10 welterweight Jake Ellenberger knocked out former Strikeforce champion Nate Marquardt with a devastating right cross on the main card of UFC 158. (Video.) The performance earned Ellenberger a $50,000 'Knockout of the Night' bonus, which the 27-year-old hopes put him one fight away from a UFC title shot.

Estima, Diaz confrontation. According to a post on his Facebook account, Braulio Estima claims Nick Diaz shoved him when he tried to shake hands after UFC 158. Wrote Estima: "Even Dana (White) came to (me) straight after and said thanks for not pushing back."

Cro Cop wins K-1 GP. While it may have been controversial at times, Mirko "Cro Cop" Filipovic emerged victorious from the K-1 Grand Prix 2013, defeating Jarrell Miller, Pavel Zhuravlev, and Ismael Londt in succession to take the one-night tourney crown.

Only with Nick Diaz would Dana White be able to start a post-fight scrum by waxing poetic about American tax laws. Truly one of a kind, that guy.

"He hits like a woman. He has his full-on range to separate and punch me, but he hits like a girl because he's too scared to let go far enough to get a real punch in." -- Nick Diaz, keeping it classy.

Dana White's announcement of Rousey coaching a co-ed TUF was a major story. But Joe Rogan's live reaction to the news may have been even better.

Before anything went down on Saturday night, Nick Diaz had this behind-the-scenes conversation with a Canadian UFC public relations rep about the portrayal of his image, and somehow it got filmed.

The debut episode of Bellator 360: Road to the Championships aired late last week, and whether or not you've been following this season's tournaments, it's definitely worth checking out. (Click to watch.) 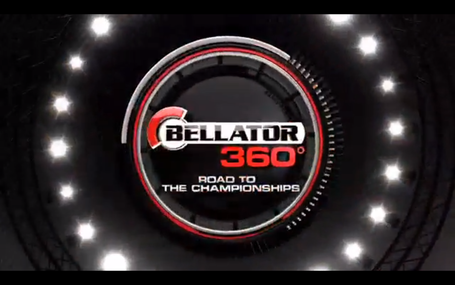 For the old-school fight fans, Mirko "Cro Cop" Filipovic's K-1 Grand Prix final match against Ismael Londt. If the fight ended at 5:00, tears may have been shed.

Hats off to #GSP for keeping his composure tonight #Champion

Wrestling wins another one!! #saveolympicwrestling

Nick Diaz seems to be peaking beautifully at 5:01 of each round #sarcasm

When GSP gets the TD it's like watching a lifetime movie. You know how it's going to play out, but you hope she can leave him somehow.

I really wish knees to the head of a grounded opponent were allowed. It would change the whole sport and the strategy and games people play.

NOT EVERYONE'S A FAN

A fighter, who takes the fight to the ground, has one mission. The other has two!

After tonight I am 100% sure I could beat GSP @dukeroufus

Retirement talk…..again…. #UFC158 I’d be a little disappointed if he retired but damn either do it or don’t.

I hope Diaz isn't serious about retiring as I am a forever fan...#ufc158

Quit whining and go to boxing Diaz and get smashed there

Nick Diaz better not retire. He is one of my favorite fighters #UFC 158

That's how u finish congrats @ellenbergermma !!!

Is Nate off the TRT for 170? Is he like chael that he would die with out it. Science I love it. And math too

The ref said they have a sale at his favorite store , gtg #EarlyStoppage #UFC158

Ya that was bad for Carvalho. He was rocked as on crazy legs but should have been given more time.

That's a good stoppage!! He was about to get smashed

Being a referee is a job I'd never want.

The next ultimate fighter is going to be guys AND girls in one season?!.... That's going to be interesting lol. #TUF18 #UFC #womensmma

Thank goodness @danawhite and the producer finally listen to me to make the Ultimate Fighter so much better.... fb.me/Ntmc5okQ

So awesome they are going to have 2 women be TUF coaches!! @rondarousey & winner of @catzingano /@mieshatate :)

Hahaaa did u here that??? Women and men in the same house! New TUF concept n I'm predicting a mix of TUF and Jersey Shore! #Excited

Emm men and women living together in the next ultimate fighter house...! That could be interesting.

WHAT???!!!? That is gonna be crazy. How is that gonna be regulated? Guy&girl fighters in one house with alcohol somebody's getting prego!!!

Well, I guess I'm going to have to open a 135lb gallon can of "whoop ass" on 4/13 @danawhite @zinganobjj @markhyena @leisterbowling

I will stop at NOTHING!!! "@popyura: @mieshatate @sarahcheesecake @danawhite Get the win Miesha! Want to see that show!"

I think #TUF18 would benefit from a Trojan sponsorship #JustSayin

@danawhite Kani Basami! I have skills from any&everywhere that I know both @mishatate @rondarousey cant handle #UFC twitter.com/CatZingano/sta…

"@mieshatate: @catzingano Save it for the Octagon girlie, that's what Im gonna do ;)" I have plenty saved up for that sweetie pie;)

THEY'RE LUCKY HE WASN'T HOME

@ufc some junkie punk-ass thief robbed my house when i was at gym, he took my PS4, laptop and Dr Dre beats headphone twitter.com/mousasi_mma/st…

@manglerstackz I dont need new stuf I need the adres of the punk-ass thief...

Today's Fanpost of the Day sees JonBon Joey piece it all together with: 8 Welterweight Big Fights That Make Sense

When making a lot of matchups like this I take a few things into consideration; Rankings, Winners & Losers, Fun fights, Fresh matchups, & UFC vs Strikeforce. Using that criteria I came up with these 8 fight:

Fights like Erick Silva vs John Hathaway, Jake Shields vs Tyron Woodley, & Gunnar Nelson vs Mike Pyle are also significant fights that are currently scheduled to take place & help shape out the future of the division.