We're less than 110 hours away from fight night -- but who's counting? -- and already things are starting to heat up. There's plenty on the docket today, including Junior dos Santos' trainer taking a potshot at Alistair Overeem, Andrei Arlovski talking a return to the UFC, and of course, Mark Hunt doing what Mark Hunt does. So without further ado, let's get to it.

Dos Santos' trainer talks Overeem. In an interview with Sherdog, Luiz Dorea, coach of former UFC heavyweight champion Junior dos Santos, said there was "something weird" going on with Alistair Overeem's latest dropout. "We're not here to doubt, but it's really strange," commented Dorea. "It seems that Overeem doesn't want this fight."

Hunt wasn't happy, White listened. UFC 160 co-main eventer Mark Hunt revealed that he was unhappy with the UFC over a few "discrepancies," including travel arrangements for his most recent fight, which led to recent confusion about the Junior dos Santos bout. Hunt ironed everything out with UFC President Dana White and now he's excited to "test his mettle" against the Brazilian.

Arlovski wants back in UFC. Former UFC heavyweight champion Andrei "The Pitbull" Arlovski told MMA Weekly, "I don't want the UFC to take me back in the UFC because I was a champion in the UFC. I want to earn the opportunity to be back in the UFC again. ... Every fight I've shown a good fight, and showed my skills, and showed that I'm getting better." Arlovski is currently slated to fight Anthony "Rumble" Johnson in the main event of WSOF 2.

Bonnar explains failed test. In his first public interview since his loss to Anderson Silva and subsequent failed drug test, a regretful Stephan Bonnar apologized for his actions and explained why he tested positive for the anabolic steroid Drostanolone.

Irvin ends affiliate program. Controversial BJJ instructor Lloyd Irvin terminated his gym's affiliate program after numerous schools cut ties due to the allegations against him. Per Irvin's Facebook page: "There is clearly a lynch mob made up of a handful of people who will settle for NOTHING other than my head-on-a-stick or me hanging from a tree."

How often do you find a UFC champion competing in a local BJJ tournament? Check out the brown belt middleweight finals of the recent Arizona Jiu Jitsu Open. Fun, competitive match if you're a fan of competition jiu jitsu.

I'm not sure why it took so long for Bellator to put together a highlight reel from last Thursday's show, but it's definitely worth a watch.

Erika Newsome was the last woman to face transgender fighter Fallon Fox in a sanctioned MMA bout. She lost in 39 seconds, but it may not have been as stressful as her appearance on CNN.

The crew over at Fighters Only went backstage to capture a fun, 'Dana White vlog-equse' look at BAMMA's most recent event.

The double KO is a rarity in MMA. But when you find one, you treasure it. (Check out the full video here.)

Our good friend Kyle Haase is back, and this time his sights are set squarely on the 209. (To see more work from Kyle, check out his deviantart page or hit him up on Twitter.) 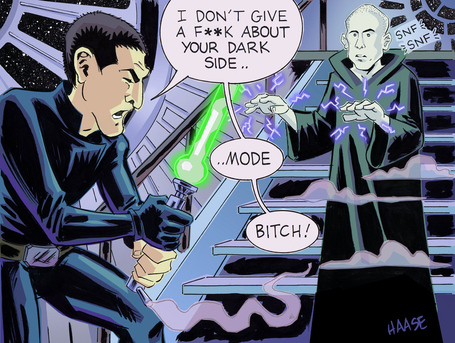 My life hasn't changed much since the big @ufc fight but if you buy a private lesson from me you can help #payoffmytruck!

4 weeks since my eye surgery,gonna go train today,haven't been in the gym for months.. prep for lavaman triathlon too..long day today

Thank you @danawhite & @lonrenzofertitta for taking care of my knee surgery! Now time to set the date! @ufc taken care their boyz.

I will dominate my opponent in a way that no one has seen before ..

@ochocinco lol..when I seen u in la when u were doing DWTS getting your Happy Feet on u weren't saying anything then! I'm game! 😄

, @lukerockhold came in the gym today wearing these. Do u think he likes himself enough? (Shoes) twitter.com/dc_mma/status/…

Today's Fanpost of the Day is the latest from John S. Nash's fantastic series: Wrestling With The Past: The Bizarre Origins of the Battle Royal - Part Two

"Everyone fought hysterically...
It was complete anarchy. Everybody fought everybody else. No group fought together for long. Two, three, four, fought one, and then turned to fight each other, were themselves attacked..."

As we saw in
"Wrestling with the Past: The Bizarre Origins of the Battle Royal - Part One", battle royals first appeared in England in the early 18th century, having been spawned directly from pugilism. They quickly became a popular attraction, but just as quickly, died out on the boxing stage -- only surviving as a competition practiced by slaves in the United States.

Fortunately, or perhaps unfortunately, battle royals would see a resurgence following the American Civil War and the post-war Reconstruction, starting in the Southern States but eventually spreading across the country.[EN5] But it was always below the Mason-Dixon line that they proved most popular.

Following the introduction
of the Marquis of Queensbury rules, they were now fought wearing gloves, although other niceties, such as rounds and weight classes, were ignored. Sometimes the participants were also blindfolded, had one arm tied behind their back, or sometimes both. In almost all cases, the participants in the battle royals were black.