Rashad Evans may have wanted to fight Mauricio "Shogun" Rua, but it looks like he'll have to settle for another of the division's elder statesmen instead.

"That fight's probably not going to happen. If any fight happens, it would probably be Rashad Evans vs. Dan Henderson," UFC President Dana White revealed on Tuesday edition of UFC Tonight.

Both Evans (17-3-1) and Henderson (29-9) are looking to right their ship after suffering listless defeats this past month; Evans to Antônio Rogério Nogueira and Henderson to Lyoto Machida.

Prior to his most recent stumble, Evans saw a four-fight win streak snapped at the hands of his former training partner, UFC light heavyweight champion Jon Jones.

Likewise, Henderson rode his own four-fight streak before a last-second knee injury spoiled a meeting with Jones and sunk UFC 151's entire card. Henderson ultimately sat on the sidelines for 14 months before falling to Machida on Saturday.

Johnson-Moraga out, Faber-Jorgensen in. An undisclosed injury forced UFC flyweight champion Demetrious Johnson out of his upcoming title defense against John Moraga at The Ultimate Fighter 17 Finale. UFC officials booked a bantamweight bout between Uriah Faber and Scott Jorgensen as the new main event.

Riddle released. TUF 7 alum Matt Riddle tested positive for marijuana following his UFC on FUEL 7 victory over Che Mills, according to a report from MMA Junkie. Riddle, who compiled an 8-3 (1 NC) record inside the UFC and hasn't lost since 2011, was subsequently released from the promotion.

UFC 157 PPV numbers. Early pay-per-view numbers indicate UFC 157 outdrew UFC 156 by 40-percent, making it "the most successful lighter-weight fight the company has had in more than a year."

If you missed last night's episode of TUF 17, feel free to check it out below.

Reddit user kizzzzurt sums this one up the best: "As soon as he switched his stance the way he did, all I could think was holy s--t this is going to be bad."

Urijah Hall sat down with the folks at Fightland to talk us through his stunning knockout of Adam Cella.

You knew it was inevitable. Check out the latest from Masato Toys: 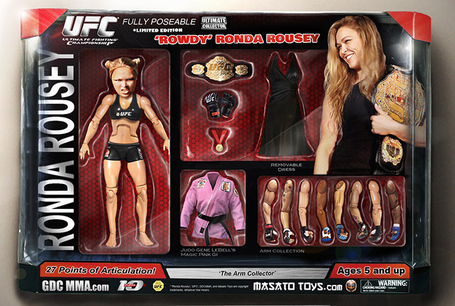 Want to thank everyone for all the support and thoughts. I should have news this week on where I will be fighting next.

Getting on a plane to Japan right now. Can't wait. Been awhile since I was in Tokyo.

NOT THE BEST START TO THE WEEK

Happy our lost luggage finally got here a day later then us, underwear and socks were starting to get very crispy @ufc

@patcurranmma no worries homie, we will dance. I appreciate the well wishes champ

"@mele5150: I sure hope it wasn't @danielstraus pimp hand that was injured." It was. Should've used more pimp powder

@danawhite Hey if the main event is out I'd love to headline the April 13th card!! What do you say @catzingano? Fans??

Me n @urijahfaber gonna putting on damn show at @ufc tuf finale live. Crazy I wouldn't be fighting if he hasn't talked me into in college!

Your not alone lol, maybe we should start a support group "@timkennedymma: Cupcakes will be a major hurdle for me when I cut to 170lbs."

G'day Tito I'm a big fan from down under,in my opinion u made mma and UFC to what It is today.Congrats on all your success,true roll model

Notable regional results after the jump...