The jury is still out whether former UFC lightweight and welterweight champion B.J. Penn will ever again fight inside the Octagon, and it now looks like it'll remain that way for the foreseeable future. Penn traveled to Utah on Monday to meet with renowned eye specialist Dr. Alan Crandall, in order to undergo surgery to repair "a damaged eye suffering from cataracts," the 34-year-old announced on his official website.

"January of last year is when I first noticed there was a problem," explained Penn. "I was looking at my iPhone and I really couldn't tell what was going on. At first I thought I tore my retina, so I went to my doctor and he said, ‘I can see right away what the problem is. You have a cataract.' The doctor told me it could be traumatic or it could be from this medicine I was taking called Prednisone, which is what I had been using over the previous few years for sinus infections."

Crandall is well known within the boxing community for successfully completing a similar procedure on Antonio Margarito, whose cataract problem were once considered career threatening. Margarito ultimately made a full recovery, and to this day remains the highest-profile fighter to regain licensure from a state athletic commission after undergoing such a procedure.

Penn revealed that his condition existed 11 months prior to his bout against Rory MacDonald, however he shouldered the blame for his loss in full, refusing take away anything from MacDonald's victory. Nonetheless, Penn nudged open the door for a potential return to mixed martial arts if the surgery is successful.

"The number one reason for the surgery is just for daily life," he concluded. "I have a tough time driving at night when the lights are shining and I'd like to get that back. On the other hand, you never know what you're going to be thinking if the surgery goes well. If I go in the gym and I'm knocking down all my sparring partners and doing awesome I would definitely think of fighting again."

Penn undergoes surgery. Former UFC champ B.J. Penn traveled to Salt Lake City, UT to undergo surgery with Dr. Alan Crandall to repair a cataract in his eye. After announcing his decision, Penn opened the door for a return to the cage if recovery goes well. Per his website: "If I go in the gym and I'm knocking down all my sparring partners and doing awesome I would definitely think of fighting again."

Rebney, Alvarez talk lawsuit. Eddie Alvarez phoned into The MMA Hour during Bjorn Rebney's segment, hoping to speak with the Bellator CEO about the pair's ongoing lawsuit. Rebney ultimately refused, however a fuming Alvarez later aired his thoughts on Rebney and the perceived "lies" Bellator's lawyers were perpetuating with their litigation.

Report: UFC cards expanding. UFC fight cards, which typically span 11 fights, will regularly begin capping off at 12 or 13 fights in order to accommodate the needs of a roster rife with new talent from Strikeforce, according to a report from CagePotato.

Maia's manager wants Saffiedine. With each of the top UFC 170-pound contenders already booked, Demian Maia's manager, Eduardo Alonso, is angling for a bout against Strikeforce welterweight champion Tarec Saffiedine next for his client, according to a report from Brazilian outlet Tatame.

"She's running from me," -- Cris Cyborg, putting it bluntly when asked about Ronda Rousey.

Even despite the awful Stemm soundtrack, the ghosts of Pride live on strong in this Japanese UFC on FUEL 8 ad.

What sort of Morning Report curator would I be if I didn't include at least one highlight-worthy slice into your day? That being said, off we go to the Scottish Open Knockdown Championships 2013...

Carlos Condit wins this one. Hands down.

Is it just me, or has Big John not aged a day since any of this old footage took place? Whatever this guy has been eating for the past 20 years, I want some.

Our good friend Kyle Haase, the man behind the remarkable MMA collage, is back with his latest work, in what is hopefully the first of many to come. (To see more of Kyle's work, check out his deviantART page or hit him up on Twitter.) 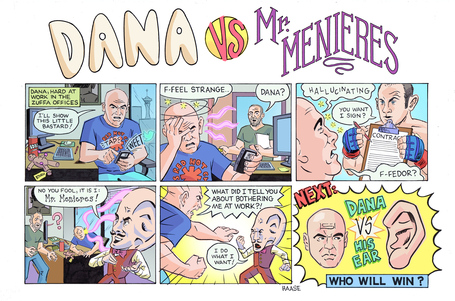 taking care of some business "@soopa_villain: @bjpenndotcom what u doing in utah BJ"

We'll see how this goes "@lovelltaylor662: @bjpenndotcom so are you going to fight again"

I've never been more excited to get back to camp, so looking forward to the end of this Chael Sonnen Chapter

@arielhelwani Got some questions for Mrs Rebney ,maybe ill call in

@arielhelwani why won't he talk to him on air?

It's official guys!! Im signed to the @ufc & have my first fight set for April 13th in Las Vegas!!

Children are the best they can shit their pants without breaking eye contact with you. It just look like their thinking really hard

Disregard anything I say I have an IQ of 84. 14 points from mentally handicapped. Explains alot???

Today's Fanpost of the Day sees tigerlee return with another edition of the: MMA Transaction Wire: February 5 - 11

All Rankings taken from Fight Matrix at time of writing

Regional results from former Zuffa and Bellator fighters, plus more after the jump...