Velasquez underwent surgery Dec. 10 to repair a torn labrum in his left shoulder after waiting nearly three months without improvement. Advised to completely rest the repaired shoulder for six months, Velasquez isn't expected to return until at least fall 2014. This isn't the first time Cain has tried avoiding surgery. He tore his right rotator cuff in his 2010 bout with Brock Lesnar, waiting two months to have it surgically repaired. He returned to action against Junior dos Santos nearly 13 months removed from the injury, earning his only career loss.

Pettis, who underwent surgery Dec. 12 to repair a torn posterior cruciate ligament in his left knee, says he's anticipating a six month recovery before he's able to fight again. Just the latest of his 2013 injury woes, Pettis was also forced to withdraw from a featherweight title bout with champion Jose Aldo at UFC 163 after suffering a torn meniscus.

Both Velasquez and Pettis have now potentially cost contenders their shots at the title. Fabricio Werdum was reportedly set to challenge Velasquez at UFC 172 in Mexico (now Baltimore), while Josh Thomson was set to meet Pettis this past weekend at UFC on FOX 9. Werdum will now face the winner of Josh Barnett vs. Travis Browne set for UFC 168 while Thomson meets Benson Henderson in the main event at UFC on FOX 10 on Jan. 25.

With multiple oft-injured champions sidelined and one walking away indefinitely, should the UFC reconsider its stance? With the promotion recently instituting time limits for injured champions, does a deadline lose its essence if it extends too long? At least in the case of now former welterweight champion Georges St-Pierre, it would seem uncertainly weighs heavier than a long layoff.

"Look at the Georges St-Pierre situation," says White. "I didn't tell Georges, 'listen, you're going to give up that title.' He gave up the title because he knows it's the right thing to do. One of the biggest moments in Georges' career, when everyone started to love him, is when he dropped down to his knees and said, 'please give me that belt. I want it so bad.' Well, there's a whole roster of guys that feel that way. To put that belt on hold until he came back, it wasn't the right thing to do."

An apprehension towards interim titles seems understandable, given their recent history in the UFC. For a period from February to November 2012, the promotion employed two such champions in Carlos Condit and Renan Barão, neither enjoying the status of top dog, while suddenly becoming the hunted. While St-Pierre put an end to Condit's waiting at UFC 154 by regaining his welterweight title, Barão will have waited 18 months for his opportunity as Dominick Cruz returns to defend his bantamweight crown.

Fortunes changed for five. Dave Meltzer tells us where UFC on FOX 9's biggest winners and losers go from here.

Aftermath. Dave Doyle breaks down the best and worst of all that was UFC on FOX 9.

Not interested. Dana White says Nick Diaz has turned down a potential rematch with Carlos Condit.

Fights to make. Whether they won or not at UFC on FOX 9, see who each fighter on the card could be facing next.

It's amazing how much a little tape can hold you back. (Skip to about 9:20)

As always, check out our 'Pro's react' piece for an instant reaction to UFC on FOX 9.

@TheNotoriousMMA thanks brotha can't wait to see u back in there hope recovery is going well :-)

Thx for the war @niklentz ur a tough sob!

Thank you everybody for the support! Thank you my coaches and partners! I'm blessed to have great people surrounding me! God bless everyone

I'd like to thank everyone for their support. Its almost impossible to respond everyone back so I apologize if I didn't get back to u

Feel like I woke up in a bad dream but nope it's just real life wanting to see what your made of. #Obstacles

Just wanted to put on a good fight.

And who the hell says Flyweights don't hit hard...

@JoeJitsu thank you joe b for the great fight. I hope you are okay. You will be back stronger it's in your character..remember milkshake :)

I will be back a new person in my next fight. This is just a minor set back on my road to the title. Thanks for the support everyone!

It was an excellent display of martial arts and warrior spirit on both sides. I love this sport. I'm proud of Mac, he fought hard and...

...gave it everything. As a friend and corner man. I couldn't ask for any more. Keep supporting those fighters. They all deserve your love.

Leaving Sacramento, thank u to all the fans out here. i apologize for my performance last night. Hats off to my opponent

I wanna say a huge thanks to everyone wached the fight and supported me it means the world to me ! Ill get that belt !

Thank you to everyone who ruined my nap by waking me up texting me about the fights... don't care @MightyMouseUFC still has what's mine

I just unfollowed Broner for this stunt -_- https://t.co/B88WLDrIW4 #boxing #BronerMaidana

Brown Belt has been a long time comin! 1 of the best days N my life! Next belt I get wont b Black it will b Gold @ufc @liborioatt #ATTnation

I broke 4000 followers and I paid for each and every one of them lol not !

I have a gut feeling Alex won the cover by default no disrespect to him just a feeling! Congrats to him anyway way better than me lol.

Want to see it again?

I've been getting bombarded from the fans about Condit/Ellenberger II fight -If that's what you guys want, I'm in!

Still getting eye fixed from the broken socket. Excited to get back to being healthy and training pic.twitter.com/cytAAOZs5l

Jesus this eye itches so f'n bad. My God I want to cut these stiches out MYSELF.

GSP is my hero and always will be. Happy for him. Get some sleep my friend! #bestever

About @GeorgesStPierre retirement. Smartest thing he could do. Leave when u are on top n be healthy enough to enjoy everything u achieved! 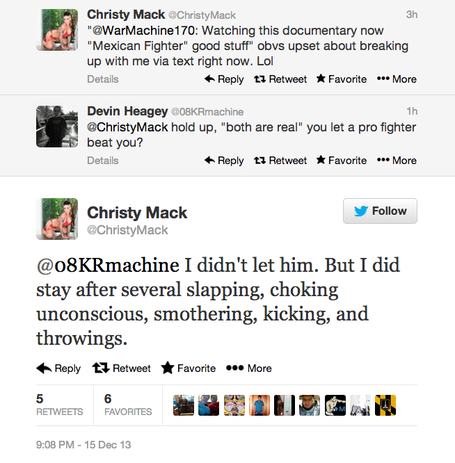 Today's Fanpost of the Day comes via Da Headbanger.

Lessons Learned and Matches to Make After UFC on FOX 9

Overall I think that the UFC is happy with how the night went. They had a title fight that wasn't epic (especially when you compare it to last weeks main event), but certainly had a definitive and entertaining ending. They had their poster boy for the lighter weight classes come out in what was his most dominating performance in the UFC. And though the card was overall decision heavy, there were a number of entertaining bouts that kept the audience engaged.

Lets establish the most notable thing though. Demetrious Johnson should not be looked at as the underdog going into any fight for a very long time. His KO of Joseph Benavidez was about the most unexpected result of the match. Who knew that Johnson could KO someone who has never been stopped before? He established his place as one of the most dominant champions in the company and seems to be improving with every fight. That is a very scary thought for any challengers in the flyweight division. Or if you simply aren't a fan of Johnson. I may be going out on a limb as I say this, but talks of him facing the bantamweight champion in a superfight wouldn't be out of the realm of possibility in the near future. He knows how to neutralize his weaknesses to the point that it is difficult to pinpoint what they might be. At this point, expect Johnson to be the champion for a long, long time.