UFC 167 on Saturday night offered the best of MMA and the worst off MMA. We saw a controversial decision, but after a sensational bout. A former young fighter who seemingly lost his way in the sport has regained surprising momentum, but another with high expectations failed to live up to them.

It's time we look at the winners and the losers, the best and the worst and separate the signal from the noise.

Most Stunning Neglect: The Treatment of Georges St-Pierre

Georges St-Pierre is not a commodity. He is not chattel. He is not a cold, corporeal substance, divorced from his own agency, to be used for the maximization of corporate profits without his consent. His consent - true, unfiltered consent not given under pressure or duress - only comes when we acknowledge his humanity, which was something absent in parts of this situation.

Let me state this as clearly and unequivocally as I possibly can: beyond the terms of his contract and whatever informal relationship he wishes to preserve outside of strict contractual parameters, St-Pierre doesn't owe anyone a damn thing. Nothing. Not a single thing. The suggestion otherwise isn't merely misplaced, it's cruel and frankly, unnerving.

We don't know for certain what's troubling the champion despite swirling rumors and reports in the media. We probably won't ever know for sure. It hardly matters. We aren't in a position to dictate what carries significance as the fluidity of mental health and illness makes objective measurement impossible, to say nothing of the physical thrashing he seems to be absorbing at an alarming clip.

Combat sports is a place where triumph is exhibited alongside abject frailty and failure. They sometimes exist within the same moment. But such contrasting outcomes are only possible when the business you're in is the manipulation of the human experience. Not 'beings' as such, but their accompanying dignity and mortality, which naturally requires we import our empathy. It's ultimately up to the athletes to safeguard their interests and lives, but one cannot ethically be in the humanity business without having profound respect and adherence to the moral strictures related to use of athletes' talents and bodies for business ends.

Without question, there was a frightening moment in time on Saturday evening where this was all lost. We - the media, fans purchasing goods and services, promoters and other members of the mixed martial arts community - are vultures who take from the athletes in this business of professionally-executed, semi-regulated beatings. The systemic safeguard is that this entire operation of blood and bone is consensual agreement between the athletes and the promoters. We don't allow anything except under the explicit terms by which we allow it. Those are defined as much by monetary compensation as the realities of the human condition, be they incredible and inconvenient.

On Saturday, however fleeting, the sanctity of GSP's agency and vulnerable humanity were ignored under the non-existent pretense that what he should contribute - what he must contribute - is something that renders his agency and troubling human condition irrelevant. If his threshold of sacrifice on the altar of athletic glory, reverence of his agency and worrisome biological state aren't enough to satisfy business demands, none of us deserve to have this thing we call a sport.

Best Photo of the Night: The Heart Break of Johny Hendricks 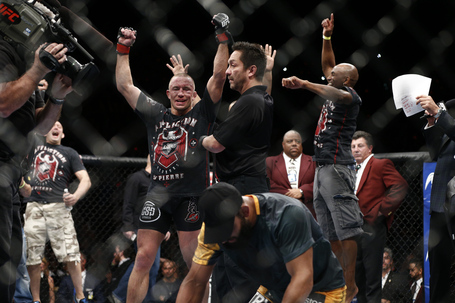 This is just seconds after the controversial decision was announced. It's hugely telling St-Pierre's first reaction after getting his hand raised is to look over at Hendricks and console him for things where he bears no responsibility. It's some combination of relief, self-imposed guilt, preoccupation and pity. Either way, the contrast is unmistakable and gut wrenching. More photos from that event here.

The deserved hoopla surrounding the controversial split decision St-Pierre took over Hendricks has drowned out some rather remarkable developments from the rest of UFC 167's fight card.

For starters, former UFC light heavyweight champion Rashad Evans bulldozed Chael Sonnen, saving his career for the moment and earning another top-flight challenge in his next bout. Rory MacDonald, once heralded as the second coming of GSP (and a man once believed to be on a collision course with his teammate), is certainly capable of reaching great heights, but the bloom is somewhat off the rose for the Canadian. And who could discount the performance of Lawler? He's experienced something of a stunning career rebirth against credible opposition in bouts of significance.

What it all means is a matter of interpretation, but it's worth remembering Saturday night was filled with more than weeping and gnashing of teeth about two welterweights.

MMA fans, to an almost alarming degree, seem to disregard the reality of natural decline in elite athletic performance, thinking a fighter can compete at their physical 'prime' well into their late thirties. There are outlying examples of that in combat sports, to be sure. Bernard Hopkins, Anderson Silva and Randy Couture evidence those claims. Here's the truth, however: while there is some shift from sport to sport in what is considered old (30 in tennis is ancient) and while an athlete's prime can also be shorter or longer than the average, peak performance is likely over for many, if not most athletes, by their early-to-mid thirties.

Some of what contributes to that is genetics. Other factors can be injuries, surgeries or functions of their role as an athlete (running backs in the NFL are often done by 32). An athlete's physical prime can also be affected by their own treatment of their body independent of bumps or bruises, e.g. long-term nutrition. Whatever the case and whatever the causes, one has to be blind or willfully blind to not notice this isn't the St-Pierre who defeated Thiago Alves.

Gone are the explosive level-changing takedowns that began as doubles and switched to knee taps - while the feet never stopped moving - when fighters tried to defend them. Gone is the motion guard passing, submission execution (or even attempts). Seemingly gone is the fluid and fatal combination striking, which itself was a function of speed, reflexes and often counter punching. I could go one from here.

Yes, his opposition are arguably getting better. Hendricks is probably the toughest challenge to date, but GSP's physical decline didn't start Saturday. I don't think he ever really regained his full explosion after the ACL knee surgery, although that's just conjecture. What I am confident in saying is that while GSP is still performing at an elite level, it's only because he was once performing from an ungodly good position. He's taking more damage than ever while executing less potent offense than ever with noticeable decline in athletic scramble, effort, explosion and movement.

I did enjoy seeing, in both the documentary that aired a couple of weeks before the event as well as at the event itself, the original SEG-era executives get a turn in the sun of success. For years, they were presented as the 'human cockfighting' guys; the ones who got MMA into the niche sport, anti-mainstream, violence-obsessed, illicit activity that nearly killed the entire thing. Certainly they do bear some responsibility for the hole the sport dug itself, but they're also the engineers, developers and frankly, inventors of what we've come to know and love. Yes, they courted controversy and Zuffa had to clean up their mess. But they also created something special enough for Zuffa to want to purchase it. They had to hand off something they could no longer care for, but that baton pass wouldn't be possible were there nothing to give. They created value and I'm glad to see Zuffa made that part of their contribution to this entire sport known to a generation of fight fans who would otherwise no know or be mistaken about the truths.

Most Important Reminder the Russians Are Coming: Ali Bagautinov

Technically, Bagautinov is Dagestani (as are many of the other 'Russians' matriculating to the UFC), but you know what I mean. Between what's happening in Bellator and the UFC, it's becoming undeniable the next rising powerhouse in creating world-class MMA fighters belongs to Russia and it's former Soviet-era satellite states. Many have sambo or judo backgrounds. Others are closer to freestyle wrestling. All of them have a steely-eyed determination and toughness that is essentially beyond description. Nearly all of them are making things a lot more interesting in professional MMA, the UFC being no exception.

Gone are the days where Russians loosely associated with Fedor Emelianenko with unpronounceable names failed to pass guard as they sat for ill-fated leg locks that good fighters escaped from only to then take tremendous beatings. This new breed is good. Very good. They also have the interesting characteristic of spanning all the weight classes, making their presence impossible to ignore.

What I'm trying to say is that I, for one, welcome our new Russian overlords.