The new UFC 167 commercial spot proved to be dangerous endeavor for one of its subjects.

While filming the commercial last month in Los Angeles, Johny Hendricks suffered a second-degree burn on his back because the lights used to film the spot were placed too close to him, his manager Ted Ehrhardt confirmed with MMAFighting.com

Ehrhardt said Hendricks tried to resume his training two days later, however, the burn was bothering him too much so he went to a doctor who prescribed an ointment to help heal it. Ehrhardt said Hendricks, who wasn't available to speak about the incident, missed one-to-two days of training, and the injury healed in a week.

"Johny never gets pissed off about anything," Ehrhardt said. "He was just mad that it was messing up his training, that's all."

A photo of the injury, courtesy of Ehrhardt, can be seen below. 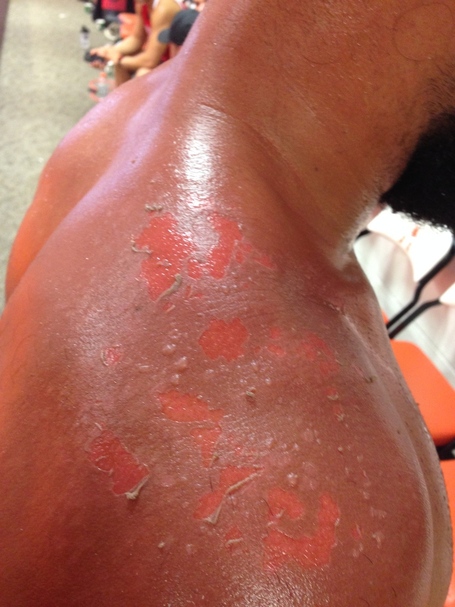 The UFC apologized to Hendricks for the accident. Ehrhadt said they were "kind of in disbelief" that this happened during the shoot, as was Hendricks who told Ehrhardt he never suffers sunburn in the summertime. Hendricks did not ask the UFC to pay for any medical costs.

Hendricks will meet Georges St-Pierre for the welterweight title at UFC 167 on Nov. 16 in Las Vegas. Watch the commercial in question below.