Those who said Cain Velasquez's third fight with Junior dos Santos would go down similar to their second-go round had things pegged.

As anyone who even remotely follows mixed martial arts knows by now, Velasquez battered dos Santos for the better part of five rounds in their rubber match at UFC 166 in Houston, leaving no doubt who's not only the best man in the heavyweight division.

Since Velasquez and dos Santos came into the bout ranked No. 1 and No. 2, and since neither have lost in the UFC to anyone besides one another, that means the result of the fight didn't change much in the new SB Nation heavyweight rankings.

Velasquez, the UFC champion, obviously remains a unanimous No. 1, garnering a perfect 60 points. Dos Santos stays second, with four out of six second-place votes for 52 points. Unbeaten Daniel Cormier, on the heels of his second straight shutout UFC victory, over Roy Nelson, gets the other two second-place votes and finishes third with 52 points (Note that while Cormier has talked openly about dropping down to light heavyweight, until it becomes official and he has a bout lined up at 205, he stays ranked at heavyweight). Fabricio Werdum, Velasquez's next challenger, swept the fourth-place votes. And "Bigfoot" Silva stays in fifth with 32.

Josh Barnett, meanwhile, made the big move in this month's poll. His swift beatdown of Frank Mir at UFC 164 bumped him up two spots to No. 5. That vaulted him ahead of Travis Browne. Browne will be able to do something about that on Dec. 28, though, as the two square off at UFC 168.

After that comes an indication of the lack of depth in the 265-pound weight class. In eighth is Alistair Overeem, a knockout victim in his past two fights and the winner of exactly one bout in the past 28 months. Mir, meanwhile, has dropped three in a row and has looked like a shell of his former self. Overeem ranks No. 8 and Mir No. 9. Given that the two square off at UFC 167, presumably the loser drops out once and for all.

(Official SB Nation rankings policy: Fighters under commission or company suspensions are ineligible to be ranked during the duration of their suspension or if they have licensing issues. At the moment, this does not currently affect any heavyweight fighters generally considered to be Top-10 caliber). 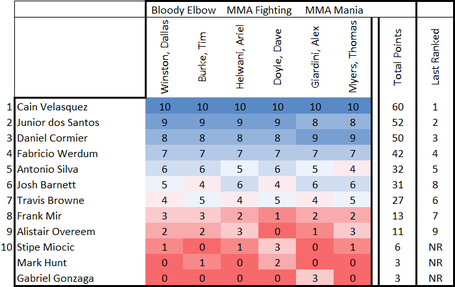 2. Junior Dos Santos (16-3, 52 points): Were the beatings dos Santos absorbed the sort which takes years off a fighter's prime? Only time will tell. Dos Santos reportedly couldn't remember the fight after the fact.

3. Daniel Cormier (13-0, 50 points): Cormier no doubt looked sleek and gained speed fighting at 224 pounds against Roy Nelson. But since he started facing the elite on a regular basis, he hasn't been able to finish.

4. Fabricio Werdum (17-5-1, 42 points): Velasquez has reached the point in his title reign in which you begin to search for potential holes which could conceivably exploited. The champ has never faced a heavyweight with Werdum's jiu-jitsu skills. Expect this point to be hammered home 1,000,001 times between now and whenever they end up fighting.

6. Josh Barnett (33-6, 31 points): Barnett-Browne is consequential enough that the winner should be on call for a title shot should anything go awry with the Velasquez-Werdum plans.

7. Travis Browne (15-1-1, 27 points): A knockout artist against a legendary veteran who has only been stopped by strikes once in 39 fights. A finish of Barnett would leave no doubt Browne's a future title challenger.

8. Frank Mir (16-8, 13 points): The loser of his fight against Overeem is widely believed to be gone from the UFC. Mir has stated that if he gets cut, he'd strongly consider retirement.

9. Alistair Overeem (36-13-3, 1 no-contest, 11 points): Mir has been manhandled over the course of his three-fight losing streak. Overeem at least has the knowledge of knowing he started strong in his losses to Silva and Browne before making mistakes.

10. Stipe Miocic (10-1, 6 points): Really, Miocic should have been ranked after he beat Nelson, but Nelson's one-sided loss to Cormier rendered the point moot.