There was much to love and little to hate about UFC 166 on Saturday night. Cain Velasquez proved he's the best heavyweight in MMA and perhaps in history, two Mexican-American lightweights put on the fight of a lifetime and nearly an entire fight card delivered fans the appropriate level of excitement and MMA skill.

Still, not everything was perfect. It's time to separate the signal from the noise, the best from the worst and the winners from the losers from UFC 166: Velasquez vs. dos Santos 3.

I've probably been accused of being everything from unfair in criticism about MMA to an outright detractor of the sport. Some of the criticism is true, although I also would offer the defense that the amount of combat sports I consume has made anything but the highest level, most unusual returns totally humdrum to my palate.

But if there was ever a reminder why I tried to get a job in the industry years ago after already being a fan, UFC 166 was it. In short, that is why I do this. This is why we watch this. That event was a refresher in why MMA is so appealing and what we're drawn to as interested observers.

MMA is an incomprehensibly chaotic contest filled with peaks and troughs that appear either at once or with accumulating doom. It's a sport whose unsurpassed, frighteningly visceral and beautiful action is brought to life by highly-elite athletes pushing themselves past any point of rational return. They do this for money, but also to achieve what is glory and other times merely proof of a stubborn point.

It is a game that is hugely rewarding and bitterly cruel, often simultaneously.  While labeled barbaric by the uninitiated, it's truthfully and exquisitely human, both because of the actors and by what those actors reveal through their simple, merciless crucible.

On Saturday, it was never banal.

Within the ranks of the converted, MMA has too many reflexive cheerleaders. Without exception, there is at least one or two prominent voices, if not a cadre of the faithful, who will find any reason to cheer on any UFC or Bellator or WSOF or Invicta or KOTC or KSW or Shooto or whatever event it may be, rendering the capacity to judge good from bad impossible.

Few MMA events are actually deserving of praise. Even fewer are so good that they merit nothing but praise. UFC 166 reached that measure of good. It was the sort of good where you didn't worry about it ending because it's value can stand the test of time.

UFC 166 was the event where you experience the meta moment of understanding why you're there and why you're watching. You aren't merely entranced by what you're seeing. The ritualization of the experience is part of who you are, be you fan, media, fighter or other participant. You're there not because you wouldn't be anywhere else, but because you couldn't possibly imagine anywhere else to be.

I included the photo at the top of the article for a very specific reason. This is merely moments before the main event is over. Dos Santos, who doesn't even know he's there, manages to threaten Velasquez with a power guillotine that forced the champion into evasive maneuvers, lest the bout be stopped due to his unconsciousness. Grasp what is happening here: this fighter doesn't even have to be his own conscious agent of affecting change; his body will take up the task - and expertly so - should he not be in control.

Then there's Sanchez. The Jackson's product is not a black belt in jiu-jitsu the most expert practitioner of jiu-jitsu in MMA, nor an expert in wrestling nor a Glory-level striker. He is not the best technician nor the best fighter in his division. What he does possess, however, is a mind that has completely stamped out any sense of rational self-preservation in pursuit of a goal. The mechanism of helping one's self when the body demands it no longer exists. While it goes without saying such an outcome would be undesirable, Sanchez is the type of person who would unequivocally fight to the death if we let him. His mind has been trained to dismiss every instinct normal humans are born with. For all the talk of working on one's triangle choke or jab or double leg takedown, few take as seriously as Sanchez the task of altering one's mind until it morphs into an engine of war when the cage door shuts.

There is a downside of their impossible will, namely, it will drag them into drowning themselves if left unchecked. When it is time to hang them up, their minds will have been conditioned to not recognize the moment. We can only hope there are those around them who can help ease the pain of and shorten that transition when it's time to happen. 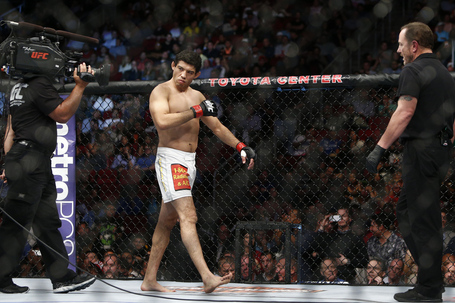 I'm picking two photos for this one. Above you see Melendez being introduced, pacing as he's introduced. He's going through the ritual of battle before stepping into the breach, both as procedure and an act of steeling his will. 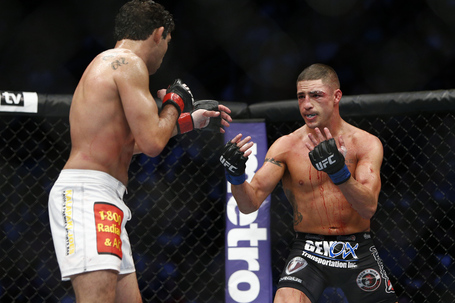 Then there's Diego Sanchez. He's not as bloody here as he would eventually become in the fight, but he's already bleeding, battered and losing. His response to all of this? To ask the person shelling it out for more of it.

This is why we watch MMA.

Maybe Gonzaga wasn't ever really done. Perhaps when he called it quits previously he was just doing what many fighters do, namely, saying 'I'm done...for now.' Whatever the case, he issued his own pink slip at a moment of deep loss, frustration and despair.

Very few of us get a second chance to achieve the highest level attainable in our professional endeavors. Almost no one finds an opportunity to re-write the ending to one of the most important chapters in our lives. Gonzaga summoned the will, despite himself and his failings, to try again. What he's found is that no matter what happens next, he was right to believe there was a next to go after.

I've heard stories from within the walls at Jackson's MMA in Albuquerque, New Mexico that Amagov is a terror for everyone who has the terrible task of being his sparring partner. Naturally, we hear this sort of story all of the time from trainers, friends and other parties close to camps about the abilities and exploits of fighters on the move. Very few times do said athletes compete in such a way that make their lackeys and support staff prescient.

Amagov is a destroyer. He's an excellent athlete with unusual skills and a ferocious appetite for violence. There's an open question of how far he can be, but on a card filled with top-level prospects across numerous weight classes, few displayed the level of finishing skill and consistent improvement against respected competition as the Chechen.

Not everyone benefited from UFC 166. Two fighters on the losing end of their particular bouts, Marquardt and Sotiropoulos, not only walked away with losses, but are, in all likelihood, facing elimination from the UFC. Both fighters are well into their thirties (the Australian is closer to forty than thirty). Marquardt is on a three-fight losing streak. Sotiropoulos is at four.

The more interesting question than 'will they or won't they be cut?' is 'what happens if they are cut?'. Both could probably continue fighting at the sub-UFC level and accumulate some wins if they so chose, but even then it wouldn't necessarily be a guarantee. That's especially true for Sotiropoulos, who lost to an opponent as equally on the UFC bubble as he.

It'll be worth keeping an eye on what path they take, but one thing's for sure: their days as elite, ranked fighters is over. Maybe their careers are, too.

Best Example of Getting Back on the Horse: Tony Ferguson, Hector Lombard, Tim Boetsch, K.J. Noons, and John Dodson

Another remarkable feature of UFC 166's greatness were the numerous moments of redemption. To be sure, every fighter's situation was unique. Some were on the chopping block. Others did not have UFC employment in jeopardy necessarily and simply wished to get back in the winner's circle. In MMA, there's really no other place to be. Either way, there was instance after instance of jubilation, relief, justified pride, a sense of accomplishment born from struggle and sacrifice as well as a hint of 'damn right'.

Generally speaking, the figures we celebrate and revere most in MMA are the ones who win the most. That's because in the binary world of competition, winning in MMA, more often than not, has more ability to transform, augment and enhance than anything else. Perhaps most importantly, being able to capture that moment when it was previously taken from you has to be the most restorative and empowering act they can do in their professional career.