Flyweight rankings: Triumph for Demetrious Johnson and division as a whole

Saturday night was triumphant for both UFC flyweight champion Demetrious Johnson and the 125-pound division overall.

"Mighty Mouse" proved his mettle in his first title defense, weathering a slow start to rally and retain his belt in a 25-minute battle against a game John Dodson. While the bout wasn't without controversy, Johnson proved himself a force in the championship rounds, much as he did in winning the title against Joseph Benavidez at UFC 152.

The division overall proved a winner in the fight's aftermath, when the UFC on FOX 6 ratings came in. The event from Chicago's United Center averaged 4,219,000 viewers, about the same as the Dec. 8 UFC on FOX 5 card. The broadcast peaked with 5.2 million viewers for Johnson vs. Dodson, refuting the loud voices of those in the MMA community who felt flyweights couldn't draw.

Johnson's an obvious number one after retaining the title, as he took a clean sweep of all six first-place votes. Benavidez and Ian McCall are neck and neck for the second and third spots, with Benavidez scoring 51 points and McCall 48. The two meet Saturday at UFC 156. 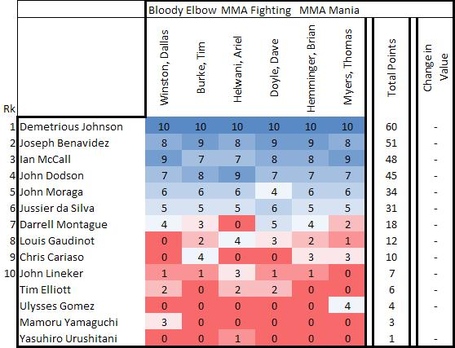 (Scoring: Fighters are given 10 points for a first-place vote, nine points for a second, etc., down to one point for 10th place. The results are then tallied up and presented here. Official SB Nation rankings policy: Fighters under commission suspension are ineligible to be ranked during the duration of their suspension or if they have licensing issues. This does not affect any flyweight fighters under consideration at the moment).

1. Demetrious Johnson (17-2-1, 60 points) If it's true a champion doesn't really feel like a champion until after their first successful title defense, well, Johnson's now a champion.

2. Joseph Benavidez (16-3, 51 points) In a division thin on headliners, no matter who wins Benavidez vs. McCall, the victor could be in a line for a "Mighty Mouse" rematch.

4. John Dodson (14-6, 45 points) Acquitted himself well on by far his biggest career stage. Dodson was one ref's point deduction non-call away from a majority draw and likely an immediate rematch

5.John Moraga (13-1, 34 points) A well-rounded finisher, Moraga sure looks like a title contender in the making

6. Jussier da Silva (14-2, 31 points) Fell flat in his UFC debut, but "Formiga's" track record around the world speaks for itself

7. Darrell Montague (12-2, 18 points) The best flyweight outside of Zuffa scored a win over former Shooto champ Mamoru Yamaguchi in Japan on Dec. 24

8. Louis Gaudinot (6-2, 12 points) Injury has kept Gaudinot out of competition since his impressive win over John Lineker in May

10. John Lineker (20-6, 7 points) Victory over Yasuhiro Urushitani in Macau made for a nice rebound from his loss to Gaudinot.