After enduring abuse and then tragedy, ONE FC's Eric Kelly chases MMA stardom

Eric Kelly can recall when everything changed. It's not something he likes to talk about or even remember, but it altered the course of his life. How could it not? It had to, because it could have killed him.

Just five short years ago, mixed martial arts was not on Kelly's radar as a profession. Back then, he was working as a bodyguard for an influential Filipino business figure. The country is rife with corruption, and as a result, doing business there can be dangerous. Kelly's boss, Pablo Glean, was a major figure in the city of Makati, considered the financial center of the nation. To do business there, Kelly said, you probably had to go through him. And to go through him was not easy.

That type of influence predictably brought lots of enemies, which is where Kelly came in. Despite being just 5-foot-7, his background in boxing and martial arts gave off a reputation of toughness. To him, being a bodyguard was just one in a series of jobs he was trying while looking for his niche in life. He had already driven a cab, worked as a chef, performed as a movie stuntman, and now he was protecting a marked man. It was a role that Kelly did not particularly enjoy, but it paid the bills, and that was reason enough to be there. He was a man, after all, with poverty in his past. He had slept on Manila park benches, learned to game the city's transportation system so he could ride for free, and sometimes been reduced to ordering food without paying in order to get a meal. Bodyguarding was by no means a glamorous job, but it was a means to live.

That all changed three months into it. That day, Kelly was on duty when his friend and the car's driver parked the vehicle that they were traveling in along with their boss. As they reached a stop, Kelly picked up his boss' attache case and exited the vehicle. A moment later, as he turned back to hear a request from his boss' wife, gun shots rang out.

As Kelly tells it, the incident seemed to last forever, but was over in seconds, and when he was finally able to survey the scene, he saw his friend, driver Edilmar Pancipane, had been killed.

While his boss escaped unharmed, that only meant he was still a target, and three months later, it happened again. This time, the perpetrators found their targeted victim.

For the second time, Kelly had been hit only by luck; because it was his son's birthday, he happened to be off duty, spending time with his family. Benhur Bernados, who was working in his place, was also gunned down, and three others were hit by bullets. After two shootings within months, Kelly knew there was no more tempting fate. It was time for his life to take a new path.

Kelly had always been interested in fighting. It started in his elementary school days when he would compete in the playground, with friendly bouts that were based on kicking each other in the legs. As he grew, he says he suffered from abuse at the hands of his father, but although he never fought back, he needed an outlet to vent his frustrations. He found it one day around the age of 19 when a friend invited him to a gym to try kickboxing. It was perfect. 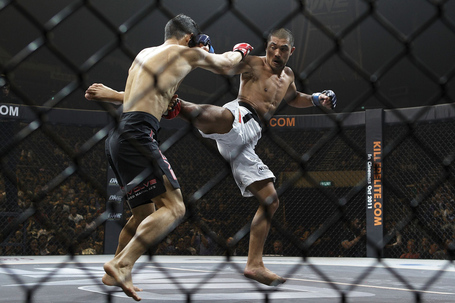 "I felt good, relaxed," he said. "After trying it for a few minutes, my anger towards my father was gone already. Whenever I would get angry again, I would go back to the gym."

Soon, the outlet became a passion, Kelly going for long sessions of hitting pads, taking out his frustrations, of which there were many. As the oldest of seven children, he was frequently the target of his father's anger.

Quickly, he improved. Fast enough that he gained the nickname "The Natural." The name seems apt. So far, he's a perfect 9-0 with eight of his victories by finish. Incredibly, Kelly credits his father for advancing his career, first, by prodding him to Anglicize his surname from Killi to Kelly to better market himself; and second, for testing his mental strength. Kelly believes he can't be broken.

He provided evidence in his most recent fight, a bout against Australian Brad Terrey. Early in the first round, Kelly's right eye became swollen shut. Standing before most doctors from most reputable commissions, the fight would have been waved off; it was clear he only had vision in one eye. But his cornermen lobbied the ringside doctor to allow him to continue. Amazingly, they let him fight not only for the 10-minute second round, but looked at him again afterward and allowed him to continue for an overtime after the judges were deadlocked on naming a winner. After over 22 minutes of fighting, most of it with one good eye, Kelly snatched an arm bar to pull off the win.

The victory set Kelly up to fight Honorio Banario for the ONE FC featherweight championship at ONE FC: Return of the Warriors on Feb. 2 in Malaysia, where he currently lives and trains. It is something of a home match for him, even though there will be an air of unease to it. Banario is a former trainer partner and a friend.

It is a match that Kelly did not originally want. When ONE FC approached him with the offer, he was against it. In his country, it is frowned upon to fight a fellow Pinoy. And since the fight's announcement, he's had to answer many times why he's doing it. Though he originally resisted the idea, he feels he ultimately had no choice. When the promoter told him Banario had already accepted the bout, he felt obligated to do the same.

"Time has passed," he said. "We're getting older. I learned new things, maybe he learned also. It's been a very long time. We'll see who's the best, and then after that, all is forgiven."

ONE FC's show takes place in a 16,000-seat stadium, and because of its growing clout in the region, Kelly has no immediate plans to abandon the promotion even with a win. But he also acknowledges that one day in the future, when he thinks he's ready, he'd like to test himself against some other international talents. For example, he loves watching Jose Aldo, who happens to be competing the same night as him. If he gets there one day, he'll be happy to try it. But if not, he knows he'll always survive. After all, that's what he does best.

"I'm not hurrying anything," he said. "I'm just going to keep going and trying to be happy everyday. We'll see what happens in my life. I just keep on enduring life and smiling at the people who are hitting me."