And so it's come to this. The final 48 hours of the Strikeforce era. I have to admit, it feels a bit disappointing. My colleague Mike Chiappetta hit the nail on the head when he compared this week to a funeral more so than a celebration. After all, it's not like we're expecting WEC 53 here. Saturday's lopsided main card could potentially be the easiest five-fight parlay of the year.

Maybe Strikeforce deserved better. But still, seven years isn't exactly something to sneeze at in an industry so erratic. Besides I think we've all learned our lesson by now about judging cards before they actually take place, so it's probably best to table the subject until Monday.

For now, let's just try to enjoy an old friend one last time while we still can.

Velasquez responds to Fury. Speaking to ESPN, UFC heavyweight champion Cain Velasquez responded to the persistent challenges of heavyweight boxing contender Tyson Fury. Said Velasquez: "I'm not a boxer. I'm a mixed martial artist, and if he wants to fight, he can go into the UFC and work his way up like everybody else does. Nothing is given to you in this world. ... Don't talk about it, go ahead and do it."

Mousasi and the frustration of 'overrated.' Gegard Mousasi has long listened to his critics throw around one damnable word. Overrated. Now, with a move to the UFC approaching, Mousasi finally has a chance to prove just how wrong they all are.

Edgar already nearing 145. With over three weeks remaining before his bout against Jose Aldo, former UFC lightweight champion Frankie Edgar is already less than ten pounds above the 145-pound limit, according to a report from Las Vegas Weekly. So it looks like cutting weight won't be an obstacle for "The Answer," just like at 155 pounds.

Palhares, Beltran fail drug tests. UFC veterans Rousimar Palhares and Joey Beltran were handed nine-month suspensions by the UFC, retroactive to December 14, 2012, after failing post-fight drug tests at UFC on FX 6. Palhares tested positive for elevated levels of testosterone, while Beltran tested positive for the anabolic steroid nandrolone. Like all international events, testing was administered by the UFC itself, marking the third international card marred by a failed drug test over the past three months.

Illness delays Barnett's arrival. A case of "a little congestion" delayed Josh Barnett's arrival to Oklahoma City. Barnett landed in OKC on Thursday morning after being cleared by his doctor on Wednesday.

Harsh words from Bisping. Writing on his pre-fight blog (via Yahoo! Sports), Michael Bisping claimed his opponent Vitor Belfort had the "heart of a chicken," while also dropping this nugget: "A fan tweeted me a link to Vitor in some Brazilian reality TV show, a clip where he's in a bath kissing someone's feet. It was pretty fruity stuff but, if he enjoyed sucking toes, he's going to have the time of his life on January 19 because I'm going to kick him in the face all night long."

Matthew Maldonado is a Mundials gold medalist. This is an absolutely sickening story.

There's no easy transition from something so horrific, but there are definitely worse ways you could spend your morning than watching 15 minutes of the best knockouts of 2012.

This is what we've come to, where James Thompson is the voice of reason.

Our good friend Zombie Prophet took the liberty of compiling this mega-playlist of 147 (!) videos featuring the cast of The Ultimate Fighter 17. And yes, the first clip is TUF 17 hopeful Kevin Casey rapping with Spencer Pratt.

Morning Report rule No. 438: Anytime a UFC contender films themselves high-kicking a food item in high-definition slow-mo, that video is getting posted. Hear that fighters? Time to start stepping up your game.

Joe Rogan and Eddie Bravo decided to re-watch Bob Sapp's classic battle of attrition against Big Nog, and I have to admit, their commentary is strangely entertaining. Check out part 2 here.

First off, I'll go ahead and say that if you've never seen the film American Psycho, you should probably get on that. Likewise, if you've never seen it, this comic will probably fly completely over your head. But for those that have, French illustrator Déconnecté has recreated the classic "Morning Routine" scene to feature MMA's own version of Patrick Bateman: Mr. Rory MacDonald. Check out the first four panels below, before catching the rest here -- 5, 6, 7, 8, 9, 10, 11, 12, 13, 14, 15, 16, 17, 18, 19. And if you're at all confused, this is the scene from the film. (Slightly NSFW.) 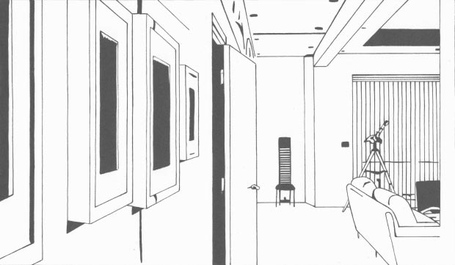 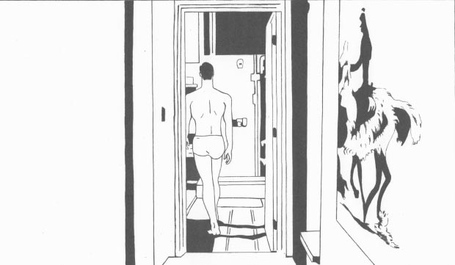 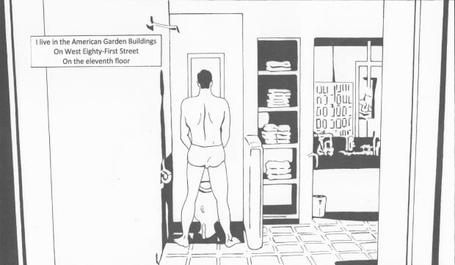 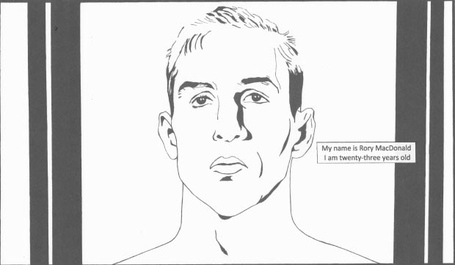 Now that's some pressure but I'm up to the task. RT @devilpig666 New motivation poster for @joshlbarnett. twitter.com/Devilpig666/st…

Just signed & returned my @ufc contract. No date yet but hopefully will know soon. Bout to go down. @hdmma @americantopteam #TeamQuixie

Sitting here at at the MMA Award stage. Staring at the back of @rossjmiller 's head from a distance #Creepin twitter.com/JoeJitsu/statu…

Today's Fanpost of the Day comes from Steve Borchardt, who did his homework for: A detailed look back at ratings for year one of the UFC and FOX relationship (Including ratings for every show this year)

Late in the summer of 2011 Dana White was a very happy man. The date was August 18th to be exact and the UFC had just signed a landmark seven year contact with FOX. The new deal called for four live specials a year on the top rated network and numerous events on its cable properties FX and FUEL. By all accounts, the future was looking bright.

"This partnership is going to be amazing," proclaimed White. "It's going to take the sport to the next level. And all those people out there who thought I was a lunatic 10 years ago when I said this sport was going to be the biggest in the world, here we are. This is the first step."

While you certainly can't blame the UFC president for being excited after signing such a monumental deal, when it comes to ratings the first year of the UFC and FOX relationship hasn't exactly lived up to those lofty expectations. Ratings for the UFC on FOX series have been a mixed bag thus far, with a pair mediocre numbers in the middle of the year book-ended by shows netting strong ratings in January and December. It's certainly possible the UFC will reach "the next level" in terms of popularity thanks to the FOX deal, but they aren't there yet.

Meanwhile over on the slowly emerging FUEL TV, UFC programing has been a success relative to the station's low average. However, FUEL is still available in very few homes so even the best rated show on the network is viewed by a miniscule audience.

By and large the bulk of first run UFC programing airs on FX, which in theory should have exposed the company to more viewers than Spike TV thanks to its higher station average. So far this hasn't been the case, with UFC on FX specials drawing significantly lower numbers than the UFC Fight Night series did on Spike. This must come as something of a disappointment considering the UFC is now sharing a network with hit shows like Louie and Sons of Anarchy rather than low rent programs like Manswers and Blue Mountain State. However, even though UFC on FX ratings haven't been stellar, they are still within an acceptable range.

The same can't be said for Ultimate Fighter since the move to FX. Many predicted Friday would be a difficult night to draw viewers given the UFC's target demographic, but few could have predicted just how precipitous the drop would be. Ratings started a bit flat, if still respectable, for The Ultimate Fighter: Live back in March, but they completely bottomed out this fall when TUF 16 set an all time low not once, not twice, but three times during the series' thirteen episode run. Things got so bad the UFC made the controversial pick of Jon Jones and Chael Sonnen as coaches for the upcoming 17th season of TUF and convinced FX to move the show to Tuesdays, where it will serve as the lead in to the popular Sons of Anarchy.

Some critics may view this as putting a band-aid on a knife wound considering how moribund TUF appears at this point, but a look back at past seasons' ratings reveals it might be too soon to sound the death knell for the long running reality show. There have been times in the past when lackluster TUF ratings on Spike - although still far better than this year's on FX - have led people to believe the show was at least water-skiing in a leather jacket and white swimming trunks if not already full on jumping the shark. However, on at least three separate occasions TUF bounced back strong.

Season 10 did some of the best numbers in the series' four year run up until that point thanks to an all heavyweight cast featuring Kimbo Slice and a dynamic rivalry between coaches Quinton "Rampage" Jackson and Rashad Evans. Georges St. Pierre and Josh Koscheck had a similar dynamic on season twelve and also did stellar ratings More recently, season 14 pulled in impressive numbers with relatively mid-tier stars Michael Bisping and Jason "Mayhem Miller" as coaches.

So why did ratings fall off a cliff this year?

That's a question we won't be able to fully answer until about midway through the next season. It may be that convincing fight fans to stay in and watch a reality show every Friday night is a losing proposition. Perhaps the casts of fighters and coaching dynamics just failed to catch on with viewers this year. Of course it's also possible that despite past comebacks the concept is simply past its expiration date and no amount of band aids will ever stop the bleeding.

Whatever the future holds for The Ultimate Fighter, the UFC and FOX relationship is likely to look quite a bit different over the coming years as both sides grow into the partnership. With the current belief in the television industry that live sporting events offer "DVR-proof" programing that can therefore demand higher advertising rates, it's a great time for the UFC to be on network TV. This challenge so far has been balancing the company's primary revenue stream - pay per view - with delivering cards on FOX that feature enough mainstream stars to garner viewer interest. It's an encouraging sign for the company going forward that they seem to have stumbled upon a winning formula late in the year with UFC on FOX 5. Whether they can continue that momentum going forward will be one of the major stories to watch this year.

But before we do that, let's take a closer look back at the ratings for the first year of the UFC and FOX's relationship and see what we can learn.

Much, much more after the jump.