Earlier this week the sport's latest, most coveted free agent, former Bellator lightweight champion Eddie Alvarez, compared the opposing contracts given to him by the UFC and Bellator to "fine dining and McDonald's," while so aptly concluding, "Dinner isn't dinner." At the time, Alvarez couldn't delve into specifics for legal purposes, however now he may not have to.

Both contracts are now exhibits in the lawsuit between the two parties, and our friends at MMA Junkie were able to acquire copies. Reported stipulations in Alvarez's UFC contract include:

Well, then. If that's the metaphorical lobster dinner Alvarez was referring to, it's not difficult to see where he was coming from. Though I'm sure Anthony Pettis and Gilbert Melendez can't be too pleased to hear yet another lightweight be promised a title shot.

On the other hand, Bellator CEO Bjorn Rebney's claim of simply copying the UFC contract word-for-word while replacing any mention of "Zuffa" with "Bellator" appears to be valid. So Rebney is correct that the two deals are technically the same, even if one promotion's business model revolves around pay-per-view sales while the other has yet to journey off cable television.

If this is indeed the framework of these two deals, it certainly seems as if Alvarez's potential earnings are far greater inside the UFC. Though given that clauses like pay-per-view points are strictly hypothetical until they become a reality, it looks like we'll have to wait and see how the court views the matter.

Alvarez contract details emerge. The UFC contract offered to Eddie Alvarez included an "intent" to grant Alvarez an immediate title shot against Benson Henderson in March, a tiered share of pay-per-view revenue, a starting salary of $70,000/$70,000 with $5,000 raises per win, a $250,000 signing bonus, a booking on a FOX card, plus three commentator appearances for UFC-branded media, according to a report from MMA Junkie. Bellator's contrasting contract includes additional bonuses for various media bookings ($125,000 total) as well as the $250,000 signing bonus.

Guida had to lose 30 pounds. According to his personal blog, Clay Guida weighed in at a hefty 175 pounds prior to his training camp for UFC on FOX 6, the heaviest of his career and 30 pounds over the required weight for the featherweight division. Regardless, Guida is now sitting pretty at 155 pounds two weeks out from the event. (Via Fightland.)

Belfort's awkward TRT answer. Speaking to ESPN's Brett Okamoto, 35-year-old contender Vitor Belfort delivered a winding, bizarrely evasive answer when pressed for his stance on TRT and whether he has ever applied for an exemption.

Cormier: lopsided line is ridiculous. Said Daniel Cormier of the "disrespectful" 20-to-1 odds Las Vegas has posted in advance of his bout against Dion Staring: "This guy has had a long career and fought a lot of people, and for them to just count him out like that is kind of ridiculous. In an MMA fight, all it takes is one punch from a 240 pound man to put you on your ass."

Bellator unveils welterweight pairings. The bracket for Bellator's season eight welterweight tournament has been finalized. Season-five winner Douglas Lima vs. Michail Tsarev and Marius Zaromskis vs. Brent Weedman highlight one side, while the other pairs Jose Gomes vs. Raul Amaya and Koffi Adzitso vs. Ben Saunders.

If you didn't get a chance to see Esther Lin's 'Best of 2012' piece yesterday, I highly, highly recommend you make time to do so today. Beautiful work.

If I'm being honest, I could watch Anderson Silva box all day. Throw in Big Nog as a sparring partner, and we've got something special here.

Nate Diaz and E-40 signing autographs in the middle of Stockton? Check.

It's been way, way too long since we've met our 6-second Swedish KO quota. For that, I apologize.

"I ate a unicorn and now I have magical powers." - Alistair Overeem. Yup.

The folks over at Fightnomics conducted a study on the rise in striking pace throughout the UFC's lifespan. Feel free to check out the results in graph below. Some notable figures: Current fighters with the highest striking output include Renan Barao, Junior dos Santos and Nick Diaz. Guys with the lowest striking output include Tiequan Zhang, Charlie Brenneman and Jacob Volkmann. 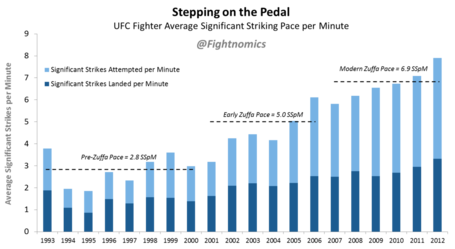 The story of my demise has been greatly overexaggerated..:) always wanted to say that LOL

Welcome everybody to the 3rd and final day of the #JobeAwards! Hope you are enjoying the show so far ... If you are not, then you smell.

I am going to start off this final day by simply recognizing the winners of a few awards where voting isn't even necessary. #JobeAwards

1st award of the day is "Manliest Mother Fucker of the Year" Congrats to Fabio Maldanado @maldanadomma#JobeAwards twitter.com/JoeJitsu/statu…

And the winner for "Fighter Most Likely To Be Mistaken For A Homeless Person" goes to @mikemav22 Mike Chiesa congrats twitter.com/JoeJitsu/statu…

@joejitsu I am so honored, this award is the highlight of my 2013.

Not wise to punch them but winners of "Most like to Punch"Bisping Dodson Roy Nelson and Julian from TUF #JobeAwards twitter.com/JoeJitsu/statu…

That is it for this years #JobeAwards .Big Thx to everyone that came out. Congrats to the winners! Until next time "Stay Awkward"LoveJoe B

With lasers RT @yannikyriacos: @jonfitchdotnet How do you think Maia will try and defeat you?

Hey @kaiwaaoficial stop tweeting like you dont owe money to anybody ! Pay your fighters ! #ufc148sponsorshipmoney #shameonyou

Oh snap " @desi_kills: There's a few things I bow down 2 The @invictafights belt is 1 of them w my girl @feliceherrig twitter.com/Desi_Kills/sta…

Why is there a loaf of bread on set? twitter.com/cainmma/status…

TAKING IT ALL IN STRIDE

With Ed Oneill at the set for Modern Family instagr.am/p/URyyfrr8GG/

Today's Fanpost of the Day comes from SecondhandMMA, who writes: Life in Japanese MMA, the Established and the Prospects

With all the gloom of Strikeforce closing up shop and being pulled into the competing MMA promotions hearse that is Zuffa, the legal drama between Bellator and Eddie Alvarez, and that dead horse that keeps getting beaten in the injury parade, I decided to step back and take a look at something that not very many people are talking about: the Japanese MMA scene.

Before you scroll past this Fanpost, hear me out. Certainly, since the death of Pride in 2007, and the bankruptcy of DREAM and SRC, there have been virtually no major league Japanese promotions. Add onto that the devastation of the tsunami just a few years ago, and the Japanese MMA scene looked to be all but dead.

However, the UFC began dipping their toes in the Japanese market, ONE FC has begun moving its way through southeast Asia with plans on Asian domination, and the ever present regional shows, such as Pancrase, DEEP, Shooto, and even a revival of Fighting Network RINGS, have kept MMA alive in Japan.

To the western eye and casual fan, Japanese MMA looks barren and lifeless. But if you inspect closer, you'll notice that there are several world renowned fighters serving under her banner, and some regional prospects just waiting to be discovered.

The world ranked talent that most western audiences are familiar with, Tatsuya Kawajiri and Shinya Aoki, and to the hardcore fans, Masakazu Imanari, have been experts in the sport for quite sometime. Kawajiri is riding a five win streak in his new home at featherweight, with four finishes. Aoki has won 9 of his last ten, with a majority of his wins coming via his trademark submission game. Imanari has stayed true to his roots and scored a leg lock submission in his last bout.

Those fighters are who people generally think of when they think of the Japanese MMA scene, the established players, and for good reason. While staying primarily in Japan, they've managed to showcase their elite skills and gain the attention of the MMA world. But then there are the upstarts, the neophytes, the prospects, of which, as far the Japanese scene is concerned, there are many.

For instance, take into account Isao Kobayashi, the current lightweight King of Pancrase. Kobayashi is (at the time of this writing) 13-1-3 in his career, and riding an 8 fight unbeaten streak. He avenged his only loss to UFC veteran Koji Oishi, and proved that he's a finisher with 10 finishes in 13 victories. The 24 year old still has a lot of time to grow and fight the competition the world has to offer (having only fought in Tokyo), but so far he's doing his home country well.

Another Japanese prospect and Pancrase product is the organizations middleweight champion, Rikuhei Fujii. Fujii claimed the middleweight title by defeating Japanese mixed martial arts pioneer Yuki Kondo not once, but twice. Add onto that his controlling style and 6 fight win streak, he's a Japanese prospect to look out for.

The final prospect I'll present you with as proof that Japan's MMA scene still has life is Satoshi Ishii. A gold medalist in Judo at the Beijing Olympics, his only losses have come against a very experienced Hidehiko Yoshida in his debut and against arguably the greatest heavyweight of all time in Fedor. He's defeated every other opponent in his still growing MMA career, including former UFC heavyweight champion Tim Sylvia. This is the most promising heavyweight to come out of Japan in quite some time, and the hype, at least so far, seems to be legit. Given time to mature his all around game, Ishii could turn into something great.

So there it is. Japan's MMA scene is not dead. Has the market cooled? Damn near frozen. But there is still life beneath the frost, and it's got a warm, promising pulse. While there may never be an organization as great as Pride in the country of Japan, there will still be world class MMA fighters to keep the Japanese MMA scene alive.