Dan Hardy hasn't exactly made it a secret that he's disgusted by Matt Hughes frequent hunting exploits. At various times Hardy has either implied that Hughes is an ‘ignorant, red neck, misguided, phony-Christian a--hole' or suggested that the Hall of Famer kills animals as a ‘cure for his impotence,' so it's not as if the message has been subtle.

And to no one's surprise, Hardy was there front and center when Hughes unabashedly posted a gallery of he and his son posing next to a slew of fallen prey during a recent trip to Africa, and then unapologetically scoffed at his critics on Twitter. Even though the skirmish was over a week ago, it was still on Hardy's mind after yesterday's UFC on FUEL 5 pre-fight press conference.

"I don't really understand how you fly out to Africa, and you stand out on the savannah, and look at those animals and go 'You know, I want to kill that,'" an exasperated Hardy said to Fighters Only. "I can't make sense of that in my head.

"For someone who's a self-proclaimed good-guy Christian, it just doesn't calculate. He's getting his morals mixed up somewhere. He needs to really have a look at himself and question what he's doing."

While I'd have to admit I lean more towards Hardy's philosophy here, it's worth noting that "The Outlaw" has publicly challenged Matt Hughes to a fight several times by now.

Hughes laughed it off in the past, citing Hardy's (at-the-time) four-fight losing streak and asking why exactly Hardy deserved such a high-profile fight. But a win on Saturday would push the Englishman to two straight, and who knows, maybe that'd be enough to see Hardy's dream grudge match come to fruition.

Hardy calls out Hughes. In an interview with Fighters Only, UFC welterweight Dan Hardy continued his pursuit of Matt Hughes, saying of the Hall of Famer's hunting exploits, "He's getting his morals mixed up somewhere. He really needs to have a look at himself and question what he's doing."

Diaz fires back at NSAC. Polarizing welterweight Nick Diaz filed a Memorandum of Points & Authorities requesting a court review the validity of his May suspension and fine from the Nevada State Athletic Commission. Diaz was fined $79,500 and suspended for one year after testing positive for marijuana metabolites following UFC 143.

Slow climb. It'd been just three days since Stefan Struve could legally stroll into an American bar and order himself a Jack and Coke, and already the floodgates of public scrutiny had been hurled open.

Jones injury update. Speaking with Sherdog, trainer Greg Jackson issued this update on Jon Jones' arm injury: "It didn't dislocate or anything. I'm sure it's just strained, and maybe a bursa sac or two went out, but I don't think it's going to be anything major."

Three interesting tibdits from yesterday's pre-fight scrum: 1.) Dana White would be more than willing to welcome Brock Lesnar back into the UFC (no surprise there, Dana loves him some $$$), 2.) Rampage vs. Mitrione obviously isn't happening anytime soon, and 3.) Bruce Buffer won't be announcing at the UFC on FX 6 card, since, you know, there's an event in Las Vegas that exact same night and it's impossible for him to be in two places at once. For the rest of the scrum, check out parts 2 and 3 here.

Earlier this week we mentioned the barbecue Anderson Silva threw without Chael Sonnen. Well, just in case you doubted him, here's some video evidence.

Heading into UFC 146, Shane del Rosario -- not Stipe Miocic -- was the heavily hyped, undefeated heavyweight name on everyone's lips. Afterward? Eh, not so much.

First it was Rampage, and now it's Manny Pacquiao who can't help but get down to Gangham Style. I fully expect to see Mark Coleman doing the Macarena next week, for some reason.

Looking for the second episode of TUF: The Smashes? Well, since you asked so nicely. (Click to play) 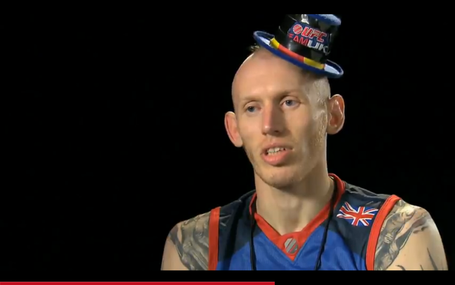 ATTN UK FANS:I hurt my knee training and I will not be able to make the signing with the amazing people @fearlessuk #Disappointed

@bigfish042 not true, we cut king mo and his manager came back to us and asked If WE wanted to match and we said no. Reb is wrong

@bigfish042 the right is in the contract but when u cut a guy u dont fuck with him when he is trying to make a living. Bad shit

Girl: I have a boyfriend. Guy: I have a pet goldfish. Girl: What? Guy: I thought we were talking about things that didn't matter.

@ceebs02 :) have Cung beat him like a drum again

Today's Fanpost of the Day is a quick weekend primer, courtesy of FightCove: 25 FACTS About UFC on FUEL TV 5: Struve vs. Miocic

1 - Stefan Struve is the tallest fighter in UFC history at 6'11". The Dutch fighter is also tied with UFC light heavyweight champion Jon Jones for the longest reach at 84.5 inches.

3 - Stefan Struve and Stipe Miocic is the first non-title heavyweight UFC main event of 2012. The last was Brock Lesnar vs. Alistair Overeem at UFC 141 on Dec. 2011.

4 - Amir Sadollah has fought all nine of his professional fights in the UFC.

5 - Paul Sass is undefeated at 13-0 with 12 submission victories, nine by triangle choke.

7 - DaMarques Johnson will compete 56-days after his knockout loss to Mike Swick at UFC on FOX 4 on Aug. 4.

9 - Stefan Struve has only gone to a decision once in 29 professional fights.

10 - Eight of the 11 bouts on the card feature at least one British fighter.

11 - John Hathaway has fought to a decision in six-straight fights.

13 - DaMarques Johnson vs. Gunnar Nelson is set to take place at a catchweight of 175-pounds after Johnson took the bout on short notice.

16 - Kyle Kingsbury fights a debuting fighter for the second time in a row.

17 - Gunnar Nelson, who fights DaMarques Johnson in his UFC debut, is 9-0-1 and has finished all nine of his opponents by (T)KO or submission.

19 - Duane Ludwig has lost five of his past eight bouts. In all five of those losses, Ludwig has been knocked out or submitted.

20 - UFC on FUEL TV 5 is the first UFC event to take place in Nottingham, England.

21 - Stefan Struve has only fought to the third round once in his 29-fight career.

22 - Matt Wiman will fight in the UFC for the 13th time, which is more octagon appearances than anyone on the card.

23 - Of the first four UFC on FUEL TV fight card headliners, two ended by decision, one by knockout and one by submission.

25 - Of the 22 fighters competing on the card, Dan Hardy has the most fights (34), Hardy and Stefan Struve are tied for the most wins (24) and Duane Ludwig has the most losses (13). Struve holds the most submission wins (16), while Hardy leads the card in career (T)KO (12) and decision (8) victories.