While the rest of the MMA world threw up its collective hands and shrugged its shoulders upon the announcement that Anderson Silva would end his vacation early to fight Stephan Bonnar at UFC 153, middleweight contender Chris Weidman couldn't actually believe what he was hearing.

"I was a little shocked and confused and a little disappointed," Weidman admitted on UFC Tonight earlier this week.

Weidman's anger is somewhat justified, as the 28-year-old ultimately gave up his pursuit of "The Spider" after UFC officials promised him Silva wouldn't be accepting anymore fights for the rest of the year. That, of course, wound up to be untrue. And now that he's back in the game, the champ has a simple, unapologetic message for the young challenger.

"Everything has it's time," Silva replied in a conference call with Brazilian media, translated by Guilherme Cruz of Tatame. "He'll have his opportunity to fight for the belt. Maybe I fight next before he gets the shot, I lose and he fights someone else. We don't know. I can fight Bonnar, lose and say: ‘you know what, I don't want it anymore'. Or maybe I win and say ‘I don't want this anymore'. Or maybe drop to welterweight or move up to heavyweight. Anything can happen. Every UFC fighter will have their chance. You have to work and wait for your opportunity."

Seeing as Silva's next opponent is projected to be UFC welterweight champion Georges St-Pierre, unfortunately for Weidman, that opportunity may be farther away he'd like to admit.

Silva answers Weidman. Speaking with members of the Brazilian media, UFC middleweight champion Anderson Silva reiterated that he'd like Georges St-Pierre to be his next fight, while also issuing a message to Chris Weidman: "You have to work and wait for your opportunity."

Jones says White never warned of UFC 151 cancellation. Twice during yesterday's presser, light heavyweight champion Jon Jones denied that Dana White ever warned him of UFC 151's impending cancellation if he turned down a short-notice fight with Chael Sonnen. White has long said that Jones knew the full implications of his decision.

Swanson defends Jackson. Featherweight Cub Swanson characterized criticism of his coach Greg Jackson as "bull," replying that, "It's always been about finishing fights, train harder and push it. He's never said to play it safe."

Johnson weighs risk versus reward. Nearly a year after Demetrious Johnson quit his full-time job to dedicate himself to his mixed martial arts career, "Mighty Mouse" and trainer Matt Hume hope the risk pays off with a UFC championship on Saturday night.

Brian Stann isn't an angry guy. In fact, I didn't even know this was possible. But Stann was absolutely furious after yesterday's staredown. Things could get interesting here.

Alistair Overeem imparting some self-styled UFC 152 wisdom: "If somebody can beat (Jon Jones), it's Vitor Belfort. Besides me, of course."

No matter how many times we hear about it, nothing compares to watching the trail of destruction that led Jon Jones to his UFC light heavyweight title.

Some things get made just to get made, and there's really no explanation. This is one of those things. Sing it with me, ya'll, "Chokin' fools with my leg lock."

March 6, 2010, WEC 47: A bloodied Miguel Torres slowly peels himself up off the floor, and we all collectively realize Joseph Benavidez is for real. 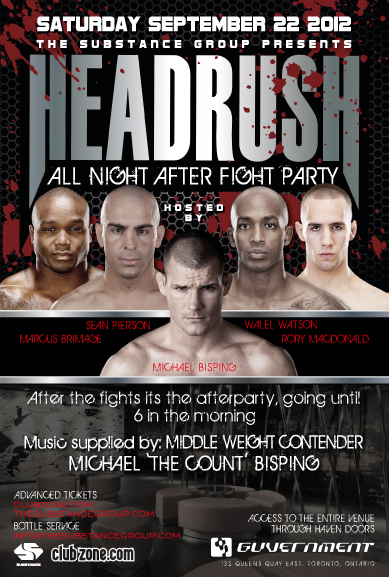 HUGHES LAUGHS AT YOUR OUTRAGE

I get such a kick out of the idiots out there hating on my hunting rights!Very funny to me.

Saw a YouTube where @danawhite said I am on medicine. I would be careful who you slander. I know the grimy guy that sells you your medicine.

I wanna see the book of mormon on broadway ... Can't do it today, just making and extremely public note...

@mayhemmiller @treyparker huh? dude, that statement made just about as much sense as you being found naked in a church.

I said the hell with jury duty , I'm headed to TUF tryouts #ThugLife

I can pee standing up too instagr.am/p/Pz20b3CknX/

Today's Fanpost of the Day comes from Josh Hall, who explores: "The Zone" and its Application to MMA

If you are, like me, a big fan of sports in general, you know exactly what I am talking about here. It is referenced all the time in the stick and ball sports, but I can't ever recall it being discussed in MMA. For those of you reading that couldn't care less for the mainstream sports, the zone is an abstract term used to describe an athlete that is playing at a skill level far above his/her normal capabilities. You will never see it show up on a stat sheet, but its effect on sporting events can be felt all the time.

The zone can occur when a great player all of a sudden rises to a level that they didn't know they could attain, and it also can happen when a major underdog is temporarily able to compete with athletes that are far out of their league. The zone is not a long term improvement in skills, but rather a short term spike in abilities. Where is comes from is a complete mystery, but it is one of the greatest feelings in athletics, however fleeting it may be.

Sports history is littered with stories of athletes that have used the zone to achieve things even they thought impossible. One of the most iconic images of basketball is Michael Jordan jogging back down the court after making a long jumper (seen above), and shrugging his shoulders at his team's bench, as if to say "I don't know how I'm this good either." Any time a pitcher has thrown a no hitter in baseball, you can bet that they felt that same feeling at some point during the game.

Many NHL championships are won and lost because of goalies that have been able to stay in the zone for playoff series. All of a sudden they make saves they normally wouldn't, while every deflection hits the post instead of going into the goal. When golfers like Tiger Woods and Rory Mcilroy have absolutely blitzed fields of the best golfers in the world and run away with major championships, you know the zone played a part in heir history making feats.

The greatest thing about the zone is that it is not something only elite athletes can experience, anyone who has ever competed can affirm that. It is that feeling of supreme confidence, and a secure knowledge that you cannot be stopped, at least not right then. It is a 100% mental thing, and yet it is something that can effect physical performance as much as anything.

As it pertains to MMA, I think it is a bit harder to see the zone in full effect. Often times fighters will cancel each other out, and many of the dominant performances we see are simply the result of one sided matchups. When a fighter wrecks an opponent they were expected to run through, it is almost impossible to determine if the zone was involved in any way. I still think, however, that there are some distinct examples, so here we go.