Roger Hollett isn't any ordinary UFC rookie. Or, at least he isn't anymore. Not after Hollett became the second fighter, following Tyson Nam, to publicly rally against a stipulation in Bellator's contracts that essentially blocked any potential advancements in his career.

Nam is still fighting his battle, though Hollett somehow emerged out the other side, being re-booked on 11 days notice to fight Matt Hamill at UFC 152 because of an assist from an injured Vladimir Matyushenko. But the bizarre, unsympathetic experience with the Bellator legal team left a bad taste his mouth, and Hollett isn't shy about voicing his displeasure.

"According to their contract, even after they release you, they have the right to match the next offer and that's the card the pulled," Hollett said to MMA Mania before signing. "They wouldn't match the offer from the UFC so I was just waiting for the release order from them, dicking around or whatever they were doing there. Obviously, they had to get Matt [Hamill] a fight so they had to put me back on the sidelines."

Hollett was then asked if he believed Bellator just wasted time with a false matching period purely so UFC couldn't sign him.

"I was scheduled to be in the Bellator light heavyweight tournament but I had a bad EKG rating. They call it an Athlete's heart, which is a little bit of extra muscle around your heart. Everybody who trains really hard has it because of the constant training and cardio. Well they were concerned because I had a little more, like it had progressed a little bit. They wanted me to take an echocardiogram but the doctors couldn't get me in on time to get it fixed and the only thing I got from Bellator was my walking papers. They didn't do anything to try and help me or anything like that."

So, just to get things straight, Hollett claims he lost not his spot in Bellator's season six tournament, but also his spot in their promotion because of a potentially serious heart condition. And then, when fortune finally smiled upon him and the UFC came calling, Bellator blocked the biggest opportunity of his life while they sat around and "made their decision" about whether or not to release the guy they had already released. And what happens the day after the UFC finally gives up and signs someone else? Bellator decides that, yeah, they could release him after all.

Now, I don't know about you, but to me that just sounds downright cold-blooded.

Hollett soured by Bellator experience. UFC newbie Roger Hollett explained the bizarre contract dispute with Bellator that led to his removal from UFC 152, and subsequent reintroduction on late notice.

Hardy wants to make 'last stand for MMA' as TUF coach. British welterweight Dan Hardy said he'd love to be a coach on The Ultimate Fighter to "try and save the sport from that show." Hardy added that he hates being connected to the house hijinks that take center stage on TUF, and as a coach he'd "make a last stand for the reputation of MMA."

Bisping rips Benavidez, thinks Silva will 'decapitate' Bonnar. Divisive middleweight Michael Bisping addressed Joseph Benavidez's assertion that he hits harder than the Brit by succinctly saying, "I'll f--king strangle him when I see him." Bisping went on to state that he believes Anderson Silva vs. Stephan Bonnar makes sense given the context of the situation, though Silva will decisively win.

Coenen accuses Rousey of ducking Cyborg. Former Strikeforce champion Marloes Coenen criticized Ronda Rousey for "lacking balls" because she "judoed at 154 pounds, entered Strikeforce at 145 pounds, and when she had to fight Cris Cyborg, she dropped to 135 pounds."

Lately it's been a bit rough being a UFC fan, so the promotion put together this little thank you note to everyone who pays the bills out there.

If this clip doesn't convince you to fly to Vegas and drop $100 down on Stephan Bonnar over Anderson Silva right now, I don't know what would. Since Bonnar punching fish was mysteriously deleted by the uploader, looks like we'll have to work in this wholesome family fun as a replacement.

Even in spite of the music choice, Wandlei Silva's otherworldly savagery makes this highlight chill inducing.

Jon Jones and Travis Browne dressed as ring girls? Invicta might as well hire Michelle Waterson to direct their promos from now on.

This kid is 18 years old, is a Moldavian sambo and judo champion, is 2-for-2 so far with under 30-second knockouts, and bears a slight stylistic, emotionless resemblance to a certain Russian heavyweight. Oh, and his first name is freakin' Ion. How good is that?

Ladies and gentlemen, I give you the last group of guys you'd accidentally want to pick a fight with at the bar: 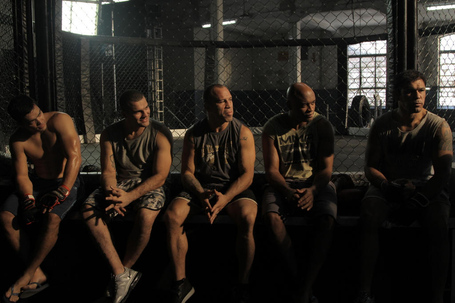 A great honor today - I received my black belt from the great Jean Jacques Machado instagr.am/p/PsJ3PMpyNS/

SOMEONE STRUCK A NERVE

Wow didn't think a big, tough, secure guy like @bisping would get all butt hurt at my blog. Pretty funny.

APPARENTLY THIS HAS BEEN GOING ON

If you really wanna fight you know where to find me. Otherwise shut your mouth RT @jackhammer135: #fightme @uselessgomez

@uselessgomez #fightme that's a shame you got to do that. As the Diaz brothers say don't be scared homie

"@uselessgomez #fightme what's this talking in another language? Now I got to get my girl to translate.

@uselessgomez #fightme wow lol u got to talk in Spanish to say I'm an idiot, also say u r going to give me walking papers.

Hey @seanshelby, @danawhite, @ufc let me beat up @jackhammer135 he keeps on calling me out. Let me shut his mouth once and for all

Dr.C says I'll b back n the gym by tues.... Thanks big guy instagr.am/p/PpKlWwP_PB/

SHE HAS A POINT

fyi, to insult people on #instagram while simultaneously having your own profile set to private is Internet for: "I am a vajayjay"

Today's Fanpost of the Day sees Patrick Wyman crunch the numbers for: The Most Dangerous Strikers In MMA: A Statistical Approach

Power is a difficult thing to define. Some fighters clearly have it: no one would dispute that Junior dos Santos hits really, really hard, for example. Some fighters clearly don't: only the most deluded fan would cling to the notion that Frankie Edgar is a power puncher. I've been trying for some time to come up with an objective way of measuring and comparing power, and I've finally found it.

On the mobile version (though not the computer version) of the FightMetric website, they've included a new statistic: knockdown rate. It's exactly what it sounds like - the number of knockdowns a fighter averages over fifteen minutes of fighting - and it's a useful statistic in and of itself. A knockdown, hopefully leading to a knockout, is the ultimate expression of a fighter's power. I wanted to go a step further, so I multiplied a fighter's strikes landed per minute rate by fifteen, and then divided it by the knockdown rate to quantify how likely an individual strike is to cause a knockdown. The lower the number, the more powerful the striker.

This has the benefit of controlling for some fighters who achieve knockdowns by massive volume striking, or others whose power is obscured by throwing for an extremely low volume. Additionally, it controls for fighters who tend to finish extremely quickly, which can obscure the general pattern. Obviously, some things get lost here: FightMetric's significant strike statistic also includes powerful ground strikes, which by definition cannot cause a knockdown, though this is less of a problem than it seems since FightMetric is extremely conservative about classifying ground strikes as significant. It also makes no distinction between power punches, jabs, knees, head kicks, and leg kicks. These different types of strikes are not all equally likely to cause a knockdown, though one could point to at least one occasion on which each has. I would argue, however, that the result - a knockdown - matters a great deal more than the specific type of strike.

(A note to those who automatically distrust FightMetric statistics: no, they're not perfect, but we can at least expect their analyses to be internally consistent. If the whole system is flawed, then so be it, but for large-scale analyses of many different fighters the comparative data are useful.)

Some of the results from this statistical analysis are unsurprising. Yes, Junior hits hard, and the statistic confirms it; Frankie doesn't, and the statistic also confirms that. In the middle, however, the results are quite interesting. We can now say, with relative certainty, that certain fighters' power has been massively overrated by pundits and highlight reels, while others don't get nearly enough respect for their ability to put an opponent to sleep. This statistic also allows us to say, once and for all, that power isn't solely the product of swinging like a drunken brawler: timing and accuracy matter just as much, as the leaderboard makes clear. Of course, throwing ridiculously hard punches helps, but that's not the sole, or even main, component of power.

Let's start with the leaders in the clubhouse. Some names will be surprising, and some won't.