Last time we were all together in this space, the MMA world had been thrown into shambles and Dana White had been last seen teetering back and forth in a corner of the Zuffa offices, clutching a signed photo of Chuck Liddell and muttering incoherently about ‘(expletive) kids these days.'

Easy to say, much has happened since then. Jon Jones apologized, sort of, even though he didn't actually owe anyone an apology. We learned that Dan Henderson had apparently been limping around for three weeks on his "last-second" injury. Chael Sonnen continued to do what is expected of him, and Jones' striking coach, Mike Winkeljohn, defended his pupil's actions with a poorly-conceived allusion to Pearl Harbor.

Aside from the timing of Henderson's injury, Winkeljohn's mini-rant was probably the most surprising of the weekend's UFC 151 developments. Although, in retrospect, the timetables do lend some credence to his conspiracy theory. Sonnen's sudden twitter beef with Jones kicked up right around the time the severity of Henderson's knee would've been diagnosed, and for a media savvy guy like Sonnen, this type of plan seems right up his wheelhouse. Though, in the case of Winkeljohn, I'm not sure evoking one of the more traumatic events in American history really ever helped anyone's case.

Nonetheless, it's clear the topic remains a firestorm of conversation for the community and probably will for some time. Just one thing, fight fans: if you really, really feel the need to tweet Jones and let him know what you think of him, just make sure you aren't accidently hassling a poor outsourcing manager from Austin, Texas.

Jones' coach saw through Sonnen's 'Pearl Harbor.' Jon Jones' striking coach, Mike Winkeljohn, defended the champ's decision, implying that Chael Sonnen had known about Dan Henderson's injury for weeks and had been secretly training for a last-second call-up. Winkeljohn went on to say Sonnen is known for "moneymaking schemes," and he was planning a 'Pearl Harbor-like surprise attack.'

Jones apologizes to fans. Jon Jones apologized to both fans and fellow fighters who lost money due to the cancellation of UFC 151, explaining that he felt terrible and if someone had to take the blame, he would accept full responsibility for the way the situation was handled.

Baroni and the eleventh-hour search for redemption. Following a career plagued with regret, UFC washout Phil Baroni gave a candid look into his struggles as he mounts one last run at a world championship within ONE FC.

Mendes charged with battery. UFC featherweight contender Chad Mendes faces one count of simple misdemeanor battery for his alleged role in a July 29 bar fight in Hanford, California. Mendes could potentially serve up to six months in county jail and receive a $2,000 fine if found guilty.

Michael Bisping and Ronda Rousey are the latest fighters to get the 'Full Blast' treatment. The pair were mic'ed up cageside at Silva-Sonnen II, and the look on their faces during the missed-spinning-backfist-crazy-knee-to-the-chest sequence really says it all.

Seriously, how massive does "Rumble" Johnson look in his 205-pound debut? That this guy ever made 170 pounds boggles the mind.

If you're looking for a quick Monday morning pick-me-up, you could definitely do worse than Prebek's latest James Toney/Nick Ring impersonations.

It ain't Nick Diaz, but Braulio Estima did what he had to do in his long-awaited MMA debut.

Apparently when you turn down a mega-fight with Chael Sonnen, it's probably best to expect some form of culinary retaliation. 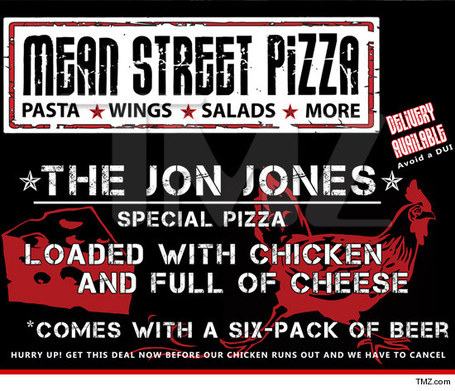 Carrying the cross for my company's decision. If someone has to take the blame, I will accept full responsibility for the way UFC 151

was canceled. I want to sincerely apologize to all the other athletes/fans who's time and money was waisted.

I feel terrible about the way that was handled.

You pay the guys from the undercard, I'll pay Vitor. See you on the 22nd.

Everyone's asking if I am mad at @ufc @jonnybones @vitorbelfort answer is no. this is a blessing in disguise. I have a spinal fracture.

Let's get something str8t.I would not have pulled from fight w vitor.i was dead set beastin thru the injurie.the switch changed my mind

With that being said and with much respect I'd like @chrisweidmanufc or another top 5 on my return in November. Thx for all the support

THAT'S ONE WAY TO LOOK AT IT

Another former world champion, now this is what I'm here for..

Today's Fanpost of the Day sees Decado try to lighten the mood with: The Guide to MMA Officiating by Steve Mazzagatti & Cecil Peoples

The Mixed Martial Arts takes it's scoring system from The Boxing, and it's called the 10 points must system.

It's called this because you must give 10 points per punch to the face.

Other things give other points.
Kicks to the legs give minus 2 points.
Punches to the air give 4 points, 5 points if it looks like they were thrown really hard.
Takedowns get 200 points,
Submission attempts are apparently a thing in this book? I'm not sure what it means so.... 0 points.

Rounds are scored on a number of different critereea. Crytereah. Crit... things.

I will explain these in detail after the jump.

Effective striking: This means who throws more punches, and who uses their arms more when they punch. The faster you move your arms, the more winning you do.

Effective grappling: This means whoever falls on top of the other guy when they bump into each other. If you're on top, you're winning. Just like sex.

Control of the fighting area: Think of the Octagon like a pit, surrounded by a moat filled with alligators. If you get too far from the middle, alligators will eat your face. I'm that alligator, but I eat points instead of faces.

Effective aggressiveness: This is who makes the scariest faces. If you have a really scary rage face it can easily win you a fight. Leonard Garcia has the best war face.