Last April, in this very column, we brought you a video of Canadian politicians punching each other in the face for a charity boxing match. So, in a way, politician fights are nothing new.

Except Ross Miller decided to take it to a completely different level.

Apparently Miller, the current Nevada Secretary of State, grew up a huge fan of the fight game. Despite his rigid political aspirations, he always held onto a dream of strapping on the gloves and competing in a sanctioned MMA match. And as you may have guessed, at age 36, Miller did just that this weekend.

Standing 6-foot-4, at a trim 205 pounds, the Secretary of State entered the cage to Creedence Clearwater Revival's "Fortunate Son," and left with a lifted ego and pristine 1-0 record after smashing Jamal Williams via second-round TKO at a World Fighting Championship event held in South Lake Tahoe. Miller, of course, promptly retired following the victory, keeping with the failsafe Costanza method of exiting on a high note.

Miller's story may be minor in the grand scheme of things, but it's just another example of MMA slowly pervading pockets of society where it would've once been shunned. Besides, according to Norm Clarke of the Las Vegas Review-Journal, "Miller's cornermen and fan section were all wearing T-shirts that read: ‘My secretary of state can armbar your secretary of state,'" which could already be one of the greatest political slogans ever.

Secretary of State wins debut MMA match, retires. In an unusual cross of politics and MMA, Nevada Secretary of State Ross Miller defeated Jamal Williams via second-round TKO at a World Fighting Championship event at the Montbleu Theater in South Lake Tahoe. Miller, who fulfilled a lifelong dream in the process, retired immediately following the match.

Jones targets heavyweight move. UFC light heavyweight champion Jon Jones said a move to heavyweight would likely be in his near future, possibly as soon as 2013-2014.

Spike, K-1 agree to broadcast deal. Kickboxing promotion K-1 inked a broadcast deal with cable network Spike TV, which is set to kick off in 2013. In the interim, four K-1 events will be streamed on Spike.com in 2012, including shows on September 8, October 14, December 8 and December 26.

Almost 1.5 million pairs of eyeballs watched Brian Green fall to Kimbo Slice last March. The shoddy footage of the KO made waves in the MMA community, and amongst cries that he took a dive, Green's life essentially turned into a living nightmare. Apparently we were all wrong. Check out this new camera angle of the fight and realize how much we owe Mr. Green an apology.

Depending on your age range, you know Ed O'Neill as either Al Bundy or Jay Pritchett. He's also 66 years old, which means some of you probably think you could take the old man in some fisticuffs. And that's where you'd be wrong. O'Neill is a 17-year veteran in BJJ and a black belt under Rorion Gracie, and here's how it all began:

Just one more reminder of how much we all love this sport.

Evidently Rhyse Saliba's elbows are actually 9000 RPM chainsaws, because Patrick Doherty came out of this House of Pain 6 match looking like an extra in a horror flick. 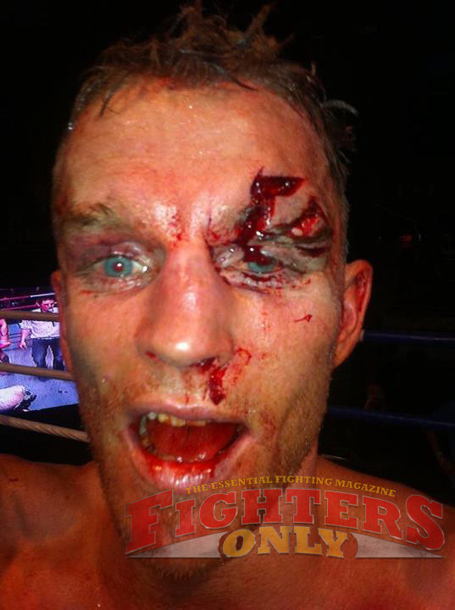 I've been reading that Cyborg doesnt want to come down to 135. OK I'm ready to step in & fight the #1 girlin the world @rondarousey.

I almost despise American Airlines as much as TSA There's nothing American about them. It cost me almost $1000 to move my flight two hours.

I KNOW you will never fight me. Don't be afraid. But I'll always be the monster in the closet of your mind, little JJ.

"Jones is a talented kid, but he's taking on a man, and I'd bet on the man any day of the week," -Sonnen

Motivation comes in all different forms, he doesn't realize that he's actually making things harder for his teammate

Today's Fanpost of the Day sees King's_Gambit echo the sentiments of a certain middleweight: Strikeforce Fighters Really Do Deserve Bonuses

On Saturday, we got a card loaded with finishes, but more than that, it's hard to find an event that had a more clear Knockout of the Night, Submission of the Night, and Fight of the Night than Strikeforce: Rousey vs. Kaufman.

If you watched OSP's savage one-punch knockout of TJ Cook, which was so violent that Cook is being checked out for a neck fracture from the back of his head slamming to the mat, you know what I mean. Were that knockout on a UFC card, you'd instantly know that OSP was getting that bonus cheque. Case closed. Doesn't even matter what occurs on the rest of the card.

Then you've got Ronda Rousey's armbar of Sarah Kaufman in 51 seconds. I'd say it's the most talked about finish of any fight this month and it extends Rousey's miracle run of arm collection. As far as submissions go, it's been major water cooler fodder. A clear submission of the night, right?

But probably the most criminally deprived are Miesha Tate and Julie Kedzie. The UFC's performance bonuses are BUILT for situations like this. We've got two fighters who are inexplicably relegated to the prelims by the broadcaster. They, nonetheless, go to absolute freaking war in a back and forth contest that tests the limits of all aspects of their respective MMA games, giving dynamic performances in every part of mixed martial arts in what is a clear fight of the year contender.

Fight of the Night bonuses are often best served to fighters who lay it all on the line on a prelim fight like this. Morever, Julie Kedzie got paid $5,000 for that fight. $5,000 for a ridiculous firefight and a fight of the year candidate. She got paid $5,000 for giving one of the best fighters in the division a real run for her money. It was a fight where no one gave Kedzie a shot in hell, with injuries keeping her on the shelf for a year and her career sliding to journeyman status. Instead, she gives the performance of her career and comes within a hair of beating one of the best female fighters on the planet in an absolute thriller. And she gets $5,000. Again, unjust situations like this are what performance bonuses are meant for.