In the past, we've all laughed off Jason "Mayhem" Miller's various misadventures. Inciting the Nashville brawl on public television? Hey, at least we got the "these things happen in MMA" meme out of it. The listless, awful performances against Michael Bisping and C.B. Dollaway, followed by an unceremonious firing for a foggy backstage altercation? Just "Mayhem" being "Mayhem."

But when Miller got involved in a bizarre Twitter feud with UFC President Dana White over the weekend -- one that included such musings as "Kill yourself Dana White" and "I am now a Warrior for Peace and Ultimate Fighter for Justice" -- a collective red flag couldn't help be raised from the community. And now, it seems, it was raised rightfully so.

According to reports from TMZ, Miller was arrested by Orange County police on Monday morning after allegedly submitting this doozy of a rap sheet: breaking into a church, trashing numerous rooms and coating the entire ground floor with fire extinguisher foam, before being found naked sprawled out on a couch (and completely coherent) by officers on the second floor.

Right about here is where Mayhem's antics cease being funny and start to become worrisome. Something like this is an easy thing to make jokes about, but when combined with recent circumstances, it just screams a cry for help. Miller has referred to mental illness in the past, and it would be heart-breaking if something as serious and bizarre as this arrest could eventually be looked back at as the warning sign that could have derailed a tragedy.

(On a brief, more personal note, I want to thank everyone in the MMA community for their support over the past two weeks. The flood of kind words have meant the world to my family and I in this difficult time. And a big thank you to Luke Thomas for keeping this train rolling. Now let's get back to it.)

Miller arrested in California. Ex-UFC fighter Jason "Mayhem" Miller was arrested for allegedly breaking into an Orange Country church and vandalizing the property with, among other things, a fire extinguisher. Miller was found naked on a couch on the second floor, according to the O.C. Sheriff's Office (via TMZ).

Silva to return in 2013. UFC middleweight champion Anderson Silva hopes to take some time off and return to the Octagon sometime in 2013, according to UFC President Dana White.

Cyborg won't drop down to 135 for Rousey. Suspended former Strikeforce featherweight champion Cris Cyborg said she would welcome a fight against Ronda Rousey at a catchweight, but would most likely be unable to make the bantamweight 135-pound limit.

More on the unfortunate "Mayhem" Miller situation from Inside MMA's Bas Rutten and Kenny Rice, plus an ominous foreshadowing from UFC President Dana White.

Good to know Forrest Griffin left the playing field and freaked out even as far back as high school.

In case you managed to get over your Henderson-Edgar II rage, the UFC has released some backstage fight night footage of the two lightweight headliners.

Alexander Shlemenko's recent destruction of Anthony Ruiz wasn't exactly the second coming of Varner-Lauzon, but if you happen to skip towards the end (say, 13:01), you just might see one of the most ridiculous broken noses this side of Rich Franklin.

Yes, this is Mayhem Miller's mugshot; and yes, he is wearing what seems to be the paper suit they give you when you're arrested naked. 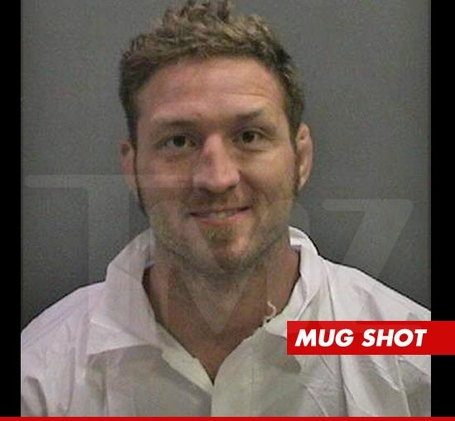 My heart is with my brother @mayhemmiller! I'm sad and I hope he's doing ok! I know him as a person with heart of gold! Love u my brother!

damn guess the don't call him mayhem for nothing!!!!!!

Hope Mayhem will find a way to get back on his feets and be ok ! Its pretty bad now , he s a cool dude !

YOUR GRISLY POST-FIGHT INJURY OF THE DAY

Someone to this after the fight, looks like my butt cheek fell into my leg,lol. twitter.com/jaredhammanMMA…

Today's Fanpost of the Day sees casey.harts roll out this beast of a post: Analyzing The Ground Game Of Lyoto Machida: The Rolling Dragon (UFC Career: Part One)

We will discuss in great detail the grappling exchanges which took Lyoto Machida's career from simply a fighter on the UFC roster to a contender in the UFC light heavyweight division. While many would like to describe Machida as 'elusive', when the contest traveled to the canvas, Machida never missed a step. 'The Dragon' was and still is very devastating when the contest would turn to the art of ground fighting. Throughout Machida's career it has been rare to see him on his back, but unknown to many his bottom game is top notch. His heavy top game, transitions, ground and pound, trips, throws, takedown defense, his anticipation and versatility on the fly have made him one of the most demanding grapplers in the UFC light heavyweight division.

The tools that will be discussed in this article:

One of the few and fleeting moments Machida ends up on his back is midway through the first round against Sam Hoger. As previously stated, Machida has a dynamic bottom game is quite underrated among most fans. Machida's ability to avoid strikes and neutralize the top game of his opponents is astonishing. In the half-guard Machida works to his side which immediately creates space. Then Machida works to control Hogers left arm to avoid damage, and shoots his left arm behind Hoger's to create leverage. Machida fishes his left arm behind Hoger's left arm to initiate a sweep, which I call the 'half-guard hip over'. When done correctly this move does not require a terrible amount of energy. By putting his arm behind Hoger's, sitting up, and maintaining the half-guard hook he has from the bottom will allow him to transport Hoger to his back with relative ease. Notice as Machida completes the sweep, with his right arm he hooks Hoger's left leg and holds it. This deters him from 'shrimping out' and creating space, as well as avoiding any taking of the back Hoger might try. The key to this technique is maintain pressure, and as you come up suck the leg that is hooked in towards them. This is one of the best sweeps, from half-guard, it is so simple and quite effective.

A little later on in the fight with Sam Hoger, Machida gets a knock down and follows up with some brutal ground and pound. Machida uses a can opener hand position with his left hand to pull Hoger's head closer and control his posture. While making Hoger uncomfortable it also nullifies much of Hoger's defense causing each punch to find its target. The real critical technique in this exchange by Machida is his foot lock defense (leg submission defense in general). As basic and easy as it is, Machida planting his foot firmly into the ground counteracts any foot hold Hoger has. The main focus to all of those submissions is to elongate and extend the leg and or foot to manipulate and control it. The base Machida creates when he steps into submission equates to someone trying to heel-hook a tree. When combining the planting of Machida's leg and the semi-can opener he not only makes Hoger uncomfortable, he distracts him with the allowing of a submission attempt he is not going to complete. Lastly a minor additive to the already very fluid motion of Machida is how he spins out of the foot-lock position. Instead of violently yanking his foot out of Hoger's hold, Machida glides it through the path of least resistance. Machida turns to his left, (which for split second could leave him vulnerable, if Hoger worked for the heel-hook) putting his heel in the arm pit of Hoger, which creates space and allows Machida to slide his foot right out with the spin.