Postcards From Stockholm: Sweden's Capital Welcomes the UFC, But Not Without Doubts

It’s past the middle of the night, and yet before the early morning. It’s a miserable hour, in other words, which is why I wouldn’t blame anyone in Sweden if they had never in their lives watched a UFC fight as it happened live.

Because of the six-hour time difference between New York and Stockholm, the main card of UFC pay-per-views (which air here on cable channel Canal+ Sport) begin at four and might easily run until seven in the morning on Sunday. What was DVR made for, if not to capture programing at four a.m., when no decent person should be awake? Go to bed, Sweden. The UFC will understand.

This, or so I am told, is a subject of debate among Sweden’s small, but passionate MMA fanbase.

Can you still call yourself hardcore if you wait until Sunday afternoon to sit down and watch the fights, Swedes wonder. Aren’t you kind of begging for spoilers at that point? And, really, don’t you kind of have it coming?

"It’s something that gets talked about on message boards here a lot," said George Sallfeldt, who happens to be the president of the Swedish MMA Federation. "You have some dads whose wives are not terribly happy about them not being able to get up on Sunday."

Even Iranian-born Swedish MMA fighter Reza Madadi, who will make his UFC debut on the undercard of the event that, locally, is being called "UFC: Sweden," said he rarely chooses sleep over MMA.

"Every Sunday when there’s a UFC, we don’t go to sleep until seven in the morning," said Madadi. "So much love we have for the UFC." 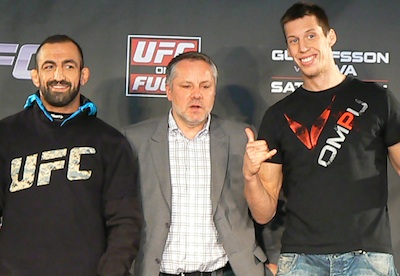 This is just one reason why Sweden’s MMA fans are rejoicing over this Saturday night’s UFC on FUEL 2 event at the Ericsson Globe Arena in Stockholm. For those who couldn’t get tickets in the three-hour span between when they went on sale and when they sold out, at least they can stay home and watch it on TV at a reasonable hour. They also get a chance to show the rest of the MMA world that, contrary to what it might think about the nation that banned boxing from 1970 to 2007, there really is a market for this stuff here. It’s just that, in Sweden, the mere fact that people want something isn’t necessarily a good reason to give it to them.

Take Stockholm, for example. The nation’s capital is a clean, lovely, livable city. You could go swimming in the many, many waterways without feeling like you’ve climbed out of a sewer afterward. You could cast a line in and catch a fish that wouldn’t taste like exhaust fumes when you took it home and fried it up. These are things you can’t do in many large cities, and that’s no accident.

The Swedes have made it this way with the dual forces of law and socio-economic pressure. Parking in Stockholm is expensive, because they want to give you a reason not to drive your car everywhere. Taxis are also expensive, because they want you to take the (very efficient) public transportation. And beyond just making you pay for the privilege of polluting their air, they’re not above making you feel bad for it. Several of the Stockholm hotels actually make a point of requesting that guests arrive via public transportation, whereas in the U.S. they think they’re saving the earth if they don’t wash your towels every single day. 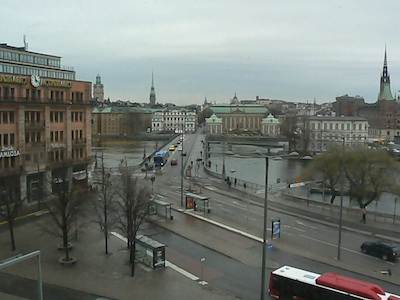 The point is, the Swedes often value the communal good over individual liberty. Just because you might want something that’s bad for you -- say, alcohol, which is heavily taxed and available from somewhat limited sources -- that doesn’t mean the government should necessarily make it easy for you to get it. The same is true when it comes to dangerous sports, which is why the nation outlawed boxing in 1970, less than a decade after heavyweight champion Ingemar Johansson relinquished his crown and retired from the sport.

Or at least, that’s part of the reason, according to August Wallen, a Swedish business owner who is now the first president of the brand new International Mixed Martial Arts Federation. The other is that, to Swedes, profiting from a sport that sometimes results in brain damage seemed unsavory.

"It was seen as quite ugly to make money off a sport like this," said Wallen. "The money interest caused pro boxers to get themselves injured. It was moral issues. The safety of boxers was a concern, but also the moral issues."

But even when boxing was still banned in Sweden, other martial arts weren’t. For reasons no one could quite explain, you couldn’t hold a professional contest where one man punched another in the head, but you could do it if he punched and kicked him. Once the establishment caught up at right around the same time MMA was gaining popularity, Sweden’s MMA enthusiasts had to make their case for regulation.

Instead of arguing, as the UFC has in New York state, that MMA would generate revenue, they instead had to make the case that it would benefit society, said Sallfeldt, who took over as president of the Swedish MMA Federation after Wallen left to head the IMMAF.

"That was the route we went. We’re not talking about revenues to Stockholm, the city, because we weren’t focused on the money side so much. Most [Swedish] politicians, that’s an easy choice for them. Like, you will make money from people beating each other up? That’s easy for them to say no to," Sallfeldt said. "Maybe that works in the U.S. Here, that wouldn’t really work."

What ultimately did work was pointing out that, statistically, involvement in any sport that’s a member of the national sports federation made kids less likely to become involved in crime. And since not everyone is interested in soccer or skiing, wasn’t it better to have them in MMA gyms than on the streets?

"We saw that if we banned this, it would go underground," said Sallfeldt. "We would be turning our back on these kids, and that’s not what we want to do. We want to keep them on the inside."

What drove Wallen crazy, he said, was the fear that a UFC event might lead to violence in the streets, when historically it’s been soccer fans who are the most likely to get out of control. Post-game debauchery costs city governments thousands in damage and law enforcement effort, he said, and yet it never seems to reflect poorly on the sport of soccer itself.

"In Sweden, there are a lot of laws that maybe aren’t functioning perfectly, but you put it in anyway because you’re building a moral thing around that law. You want the behavior to stop, so you build around that law. I don’t say it’s bad; I just say it has to be fair," Wallen said. "I agree we should use laws to make society better. If we limit someone’s liberty, it’s okay for the society’s greater good for everyone. I can buy that. But it can’t be the politician’s prejudice that decides what’s good and what’s bad. You have to look at the facts."

The speed with which the UFC sold out it’s first Swedish event is a fact worth taking note of. The scene here is growing, say the local fighters and media, and there’s a place for it in Sweden’s sports landscape. As for how a nation that values safety and responsibility over the freedom to destroy oneself for glory and money will react to a sport that’s built around such violent competition, that’s another question.

When the UFC packs up its Octagon and waves goodbye to its friendly hosts, what then? What happens when the hardcores have to go back to arguing about whether it’s better to stay up or wake up for UFC events? What happens if local favorite Alexander Gustafsson does not, in fact, become MMA’s Ingemar Johansson?

Those are questions still waiting for an answer. But in a nation that’s been changing gradually and, at times, dramatically, ever since the 13th century -- back when the big social issue was how best to keep pirates out of the lake -- no one’s in any huge rush to find out. They’ve got time. At least this weekend they can also get a little sleep.