Now that Cesar Gracie and Carlos Condit have said their peace, the Condit-Diaz ruckus appears to have finally hit a lull. With that said, it's almost required I mention there are quality fights on Wednesday for the first time in a long time. Catch up on the latest from UFC on Fuel TV and the rest of the MMA world with the Morning Report.

Mike Kyle reportedly withdraws from March 3 bout against Gegard Mousasi. For the second time in as many tries, Kyle vs. Mousasi has reportedly been cancelled.

An extended look at next weekend's lightweight championship.

Another reason to love Jared Shaw.

Dave Herman shows off his new half-hipster, half-hobo look while sharing a laugh with Stefan Struve. (via @NimaSafapour) 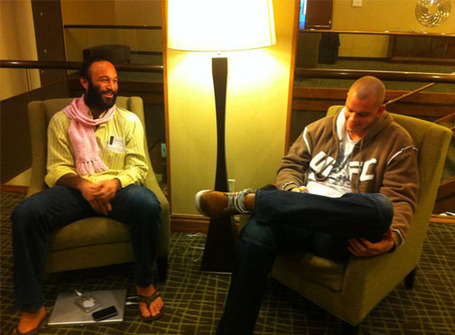 Marcus Aurelio sure was happy after his 25 second knockout at BFL 13. (HT: MiddleEasy)

Somebody please tell me why B.J. Penn looks exactly the same now as he did when he was 17.

my friend Greggie texted me this pic. me at 17, first cauliflower ear :) #oldschool twitter.com/bjpenndotcom/s…

In case you're wondering, he did this all day long.

Time for a healthy post-gym snack WITH MY SWORD!!!!!!!! twitter.com/amirMMA/status…

In a zombie apocalypse, I'm sticking with Tim Kennedy.

We've all heard Joe Rogan say it over and over (and over) again: Wrestling is the best base for MMA. By the sheer numbers of top level fighters that were previously top level wrestlers, this seems to be the case. As professional MMA is becoming a more attractive option for top collegiate wrestlers, I think we can see trend of how these All-Americans develop into mixed martial artists.

Generally speaking (of course, there's always outliers), we're seeing wrestlers go down one of two paths of development as fighters, and which path they choose can be predicted by looking at their wrestling style. Top level wrestlers, at least for the first several years into fighting, tend to develop either their striking, throwing powerful punches that knockout their foe, or their jiu jitsu, using their already strong takedowns to submit opponents. "Duh," you might be thinking. Of course fighters develop striking or jiu jitsu. The key is, though, that I think whichever path the wrestler chooses depends on their wrestling style. The best way to explain my point is with real examples. A few videos after the jump...

Found something entertaining, brutal, or bizarre you'd like to see in the Morning Report? Send it to @shaunalshatti and we'll include it in tomorrow's post.