Hopefully you were productive during the UFC's mini-sabbatical, because there won't be another one like it for awhile. But just because the Octagon was packed away, it doesn't mean the rest of the MMA world hit cruise control. From regional fight results to potential trouble booking Anderson Silva vs. Chael Sonnen II in a Brazilian soccer stadium, catch up on this weekend's news with the Morning Report.

Georges St. Pierre: MMA needs someone like Nick Diaz. As always, GSP sounded off as the voice of reason on Diaz's potential retirement.

UFC veterans Jamie Varner and Drew Fickett face off in the main event of XFC 16.

Wednesday's co-headliner Stefan Struve slaps a triangle on Chase Gormley for the UFC's "Submission of the Week."

Photographer Dolly Clew captured this ridiculous shot of Kyle Watson's blood getting knocked right out of his face during the main event of CWFC Fight Night 3. (via @CageWarriors) 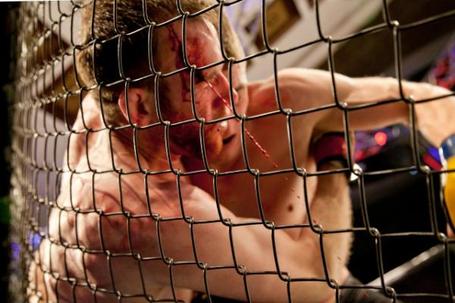 Probably hard to forget that girl.

@OksanaGrishina Arf arf! Nice meeting you and your friend. A girl in a puppy suit is the last thing I thought I'd run into at the gym.

hey @arielhelwani, i just depantsed @jaime_kennedy at the playboy party. sometimes I'm a bit more than awesome. suck it @bigsexymccorkle

Whitney Houston visited me in my sleep last night to tell me my tweet was funny. Take that Internet.

Somebody needs to make this happen.

"@asumoff: @ttags12 @azst8er @kingsbu could Whitney be a potential walk out song?" Hell yes Whitney will be my next walk out.

Today's FPOTD belongs to BE reader fightinghistorian: The time is right for a superfight, and it doesn't involve Anderson.

Although calls for a superfight between GSP and Anderson or Jon Jones and Anderson have petered out recently, due to GSP's knee injury and the attendant opening of the welterweight division on the one hand and the reemergence of Chael Sonnen as a title challenger on the other, that doesn't mean that there isn't a viable superfight out there. Ladies and gentlemen, I present you with Frankie Edgar vs. Jose Aldo.

Found something entertaining, brutal, or bizarre you'd like to see in the Morning Report? Send it to @shaunalshatti and we'll include it in tomorrow's post.