Well, that was fast. As quickly as the potential bout between Anderson Silva and Georges St. Pierre was being built up and borderline promoted, the (defensible and understandable) obstinate GSP has thrown cold water on the whole idea. That's so true that, as our own Ariel Helwani reported last night on UFC Tonight, Silva's manager thinks the fight won't happen.

Like I said, that didn't take long. GSP basically isn't budging not only from statements he's made in recent months, but even in recent years. I can't ever remember a time where GSP indicated there were reachable conditions for the fight to happen absent some nebulous future time where it could all go down.

I doubt UFC brass are throwing in the towel just yet. They still want this fight to happen. There's also the fair amount of egg on their face they'll have to wear if this never even gets off the ground as far as negotiations are concerned.

So, I've included a poll in today's Morning Report about whether you, kind reader, believe the fight will happen. I've thrown in a few videos including Frankie Edgar trying to help his home state, Tweets of Rampage declaring this isn't the end and a story of staph infection.

TUF is moving to Tuesdays. The UFC hasn't formally announced anything, but all indications are that this is what lies ahead for MMA's storied reality show.

Emotional Cruz talks about his second ACL surgery. UFC bantamweight champion (for now) Dominick Cruz spoke to UFC Tonight last evening in an emotional interview about what happened to him and the tough road ahead.

Barao vs. McDonald on the horizon. UFC President Dana White seemed to indicate a match between Renan Barao and Michael McDonald was the next bantamweight move to make.

The ratings for TUF, Bellator are in. And they're up from the previous installments, but mostly below season averages.

UFC President Dana White's first video blog for UFC on FOX 5 is out and he loves bad music:

Frankie Edgar tours Seaside Heights, N.J. in an effort to raise awareness and money for relief from Hurricane Sandy:

This isn't the end of my career.. It's the beginning! Just tired of people thinking this is my last fight ever.

IT DID, MR. GUIDA

That rug really tied the RV together... Did it not? twitter.com/clayguida/stat…

WE'VE BEEN THERE AND IT SUCKS

Why can’t I ever catch people doing shit like that? I’d have given him the stereo after I whooped his ass.

This is the universe paying me back for being a knucklehead & stealing alllll kinds of shit when I was younger.

Dude took a $5 iPod USB cord but left my Ray-Bans. Appreciate that.

SEAGAL IS OUT OF HIS MIND

Steven Seagal saying GSP is not great is like a monkey saying fishes can't swim!

SINCE WHEN DID MCDONALD'S TASTE GOOD?

Had some mac donalds today! After a longgggg time! Man it was good! #junkfood

Today's FanPost of the Day comes courtesy T.P. Grant who grappled with his first ever bout of staph infection: 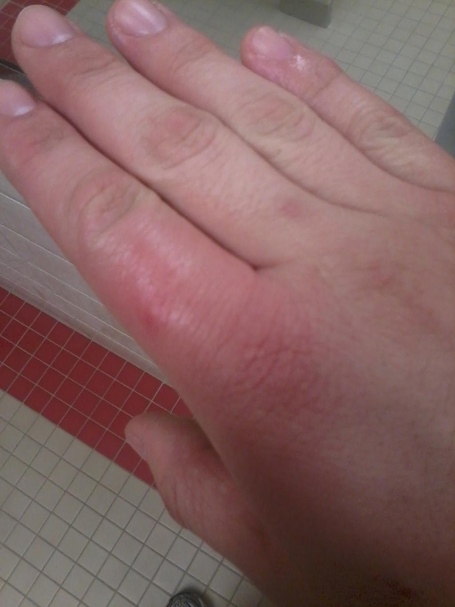 So gonna share some experiences somewhat informally as I know have a better understanding of what it is to have one of these. First of all, the one thing that jumped out to me is something the fighters never mention, but these things fucking hurt. My hand was so swollen on Sat it was useless and everything hurt. Leaving it still just had a throbbing pain, trying to move the fingers caused shooting pain, and if I let my hand hang down that caused serious pain also. I was completely unable to sleep Friday night.

Second, these things move fast. I can see why fighters, who are used to having some aches, pains, and swelling might not realize what is happening until it is a serious infection. Happily I caught it early, but it was a close call to keeping me at the hospital a few days to give me several IVs worth of medicine. It also didn't spread beyond my hand to make me sick. In less than a week this can wreck your whole month.

Finally, I didn't actually have a cut. The best guess is that I had a slight abrasion on my finger and that is where the infection set up shop. And I don't know exactly how I got it, but my best guess is from the gi from someone at BJJ. So let this be a lesson, WASH YOUR GI! It might not effect you but you also could get your training partner really sick.