We made it. There's still time left, so I don't want to jinx anything by getting into specifics. But I can't be the only one simultaneously shocked and relieved about this weekend's mammoth card that shall not be named remaining, for all intents and purposes, the exact same card that was announced four months ago.

Sure, some members of the wagon were lost to dysentery (or something like that) during our journey to the pacific northwest. But for the most part, we actually made it. Great job, guys. High fives all around. Now let's get to some headlines before we start pushing our luck.

Weekend MMA results. Catch up on a busy week in mixed martial arts with complete results for Bellator 82, RFA 5, BAMMA 11, SFL 11, and The Ultimate Fighter 15.

White feuds with Twitter followers over FOX skit. After appearing as a homeless character on a comedy sketch during FOX's NFL pregame show, UFC President Dana White defended his actions by referring to numerous individuals on Twitter as "puss" and complaining about over-sensitivity in the United States making him ill.

GSP rejects $50 million rumor. After being confronted with rumors that he may ask for a $50 million payday to fight Anderson Silva, UFC welterweight champion Georges St-Pierre responded on Canadian radio by simply stating, "I have not been informed of this. It is not true."

Hendricks: GSP is ducking me. In response to St-Pierre's coaches recently dubbing Nick Diaz the true No. 1 welterweight contender, an angry Johny Hendricks told MMA Junkie that St-Pierre was "trying to keep money from my kids" by ducking him for an easier fight against Diaz.

What did Stuart Tyrie do last week? Oh, nothing much, just get split open with an ax at Shock n Awe 12. (For the lazy, jump to 11:20. Plus check this gnarly photo of the aftermath.)

Props to Ben Marshall for the find.

Ariel Helwani, Chuck Mindenhall, Mike Straka, and our Luke Thomas returned for the sixth episode of The MMA Beat, where the crew riffed on all things Georges St-Pierre and UFC on FOX 5.

"If I could be a superhero, I'd be Superman. Because he's better than all the other superheros." Yep, that's B.J. Penn. Also, Aaron Simpson with the worst possible answer here.

With just one loss over his last 26 fights, Polish beast Mamed Khalidov is one of the top free agents middleweights left in MMA. He looked to extend that streak against TUF 3 winner Kendall Grove this weekend at KSW 21.

So, that's UFC President Dana White in full bum garb on national television. Check out the 1:45 mark of this video to see what had everybody so up in arms. 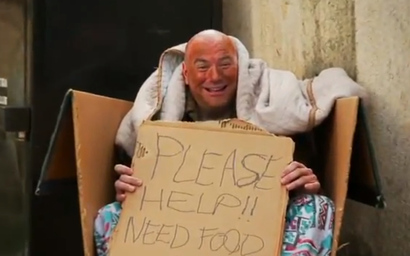 @ufcwozny it's a skit for a comedian. Pussies in this country cry about everything!!! Get a sense of humor

@jaynort people are such pussies these days it makes me SICK!!!

@papaiceman the pussies in this country who cry about everything everyone does makes me fucking ill.

@bisping that's an interesting take, I'll see you in the UFC soon my friend.

NOT THE ANSWER HE EXPECTED

Hey @forrestgriffin I'll meet u in the middle, how about a pink shirt,& flexibility like Jean Claude Van Dame #ufc155 twitter.com/PhilMrWonderfu…

WOULD PAY TO SEE

I would! RT @datdude512: @danhendo IF U HAD THE CHANCE TO FIGHT THE PRIDE VERSION OF U WHO WOULD U THINK WOULD WIN???? twitter.com/DatDude512/sta…

Today's Fanpost of the Day comes from devin.wilbourn, who writes: The debate rages on... Silva, GSP, Jones, and the illustrious super fight

So as we near an answer to whether this fight will happen now, later, or ever, I thought it worth while to take a look at the biggest arguments to date for why this fight shouldn't happen. As I see it, these are the most used:

2. Jones vs Silva is a fairer fight

3. It's not fair to St. Pierre to have to move up to catchweight since he's not asking for this fight

4. There are too many fights left in their respective divisions

5. Superfights are bad for the sport

St. Pierre is too small

I find this argument to be very interesting in light of Frankie Edgars run at lightweight. If you look at the height and reach difference between Edgar and Henderson they are very close to what St. Pierre's would be to Silva's. Then look at the weight difference of Edgar and Maynard who is said to walk around close to 200lbs whereas Frankie is said to walk around at 155. GSP is said to walk around between 180 and 185 and Anderson between 210 and 220 which is almost an identical weight difference. Even frame size which is an extremely important factor to look at here, both Henderson and Maynard looked huge compared to Edgar, definitely no bigger than Silva was to GSP. So if Edgar, (who is a fantastic fighter but I doubt very many people would place him in the same conversation as GSP), was able to find such success against considerably larger opponents (and not just for one fight, but consistently as a champion), I find it difficult to believe that either the weight or size difference between Silva and GSP is going have as profound an impact as everyone is saying. This is particularly true if Silva makes the cut to a 175-180 catch weight. Bottom line, there will definitely be a size advantage for Silva, but to say GSP is too small is insulting to GSP as a fighter, and ignores a lot of variables that effect the outcome of a fight.

More after the jump.