Mark Hominick, a veteran of fight game for over a decade, pioneer for the lower weight classes, and one of the true nice guys of the sport, has decided to call it quits. Hominick announced his retirement from mixed martial arts on Tuesday's edition of UFC Tonight.

"Over the last 11 years, I've followed my passion in the UFC," Hominick started. "Now, I'll say UFC 154 was my last fight in the Octagon as I'm retiring and moving on to next phase of my career. I have a young daughter at home and another on the way. I'll always be involved in the sport. But I know the commitment I have to make. I have to make a commitment to this as I have to fighting in the past."

Hominick went on the reiterate that this is "a true retirement," and there's little chance fight fans will ever see him back inside the Octagon.

At just 30 years old, Hominick closes his career mired in a four-fight losing streak, including a memorable bout against Jose Aldo and a stunning seven-second KO at the hands of Chan Sung Jung. The latter three of those four losses came after the unexpected death of his longtime coach, Shawn Tompkins, however Hominick refused to use such a tragic loss as an excuse, instead saying Tompkins' death motivated him "to carry on in his name, tradition and legacy."

Nonetheless, Tompkins had the opportunity to be there cageside for the one moment Hominick will treasure most -- his UFC title challenge against Aldo.

"It put me on the map," Hominick reflected. "I felt like I was competing in obscurity before that fight. I got to fight in front of 55,000 people in my home country and it really put me on the map in MMA world. I got to show people who I was as a fighter and a man."

Condit accepts MacDonald rematch. Per our own Ariel Helwani on UFC Tonight, Carlos Condit has accepted Rory MacDonald's challenge for a rematch, simply responding, "I'm in."

FOX 5 ratings. According to final ratings estimates, UFC on FOX 5 drew an average of 4.4 million viewers for its two-and-a-half hour broadcast, up 83-percent over FOX 4's numbers. Viewership peaked with 5.7 million viewers tuning into the main event.

FOX responds to Diaz bird. After Nate Diaz's single-finger salute forced the UFC to cut away from its UFC on FOX 5 broadcast numerous times, representatives at FOX issued this response in regards to the incident: "It's not appropriate for air, but the folks in the UFC's production truck were on the ball. They cut away so quickly that it was virtually indiscernible to the naked eye. We regret even a small fraction of a second snuck through."

Jones talks superfights. UFC light heavyweight champion Jon Jones believes superfights are good for the sport, but is content to continue defending his 205-pound title until someone, aka Anderson Silva, "comes and challenges" him.

Nelson reacts to Mitrione's VADA rejection. A day after Matt Mitrione admitted to rejecting Roy Nelson's request for VADA drug testing, Nelson flatly responded: "If you say 'no', then there's a reason why. I'm not here to judge, but you obviously have a reason why you're saying no. It's obvious to fans."

Bellator finalizes SPIKE move. Bellator MMA is set to debut on Spike TV on Thursday, January 17 at 10:00pm ET/PT with a fight card that includes two championship fights -- Pat Curran vs. Patricio Pitbull and Michael Chandler vs. Rick Hawn -- as well as the debut of Renato "Babalu" Sobral.

I don't know about you, but seeing these two touch gloves again sounds just fine to me. Only question, who has improved more in the past few years? (Click to watch.) 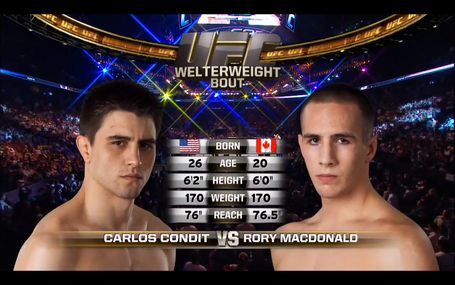 SPIKE seems committed to pushing Bellator to the degree they pushed UFC. It'll be interesting to see what kind of drawing power is still leftover from the old days.

I'm now convinced, that's exactly how this scene went down.

Sad to hear Condit accepted Rory's challenge! I was anxious to hit McDonald with "more combinations than on a Big Mac meal!" #Patience

BACK TO THE GYM

No more coach Jones just back to Bones

I had a great time, it was an experience of a lifetime "@old_el_satcho: @jonnybones u have fun?"

It's $30 a day for Internet in the hotel...! I see that criminal mentality has been passed down through the Aussie generations. ;-)

MOM CALLING YOU OUT

The only house in Santa Monica that has a ufc champion run in, use the bathroom & run out. (I saw you @rondarousey You're not a ninja)

Today's Fanpost of the Day comes from Motmaitre, who writes: The Counterpunch Chronicles: Striking for The Finish

Yesternight, the fabric of the universe was torn asunder. Cats slithered on their backs, pigs soared on angel wings, and Juan Manuel Marquez knocked out Manny Pacquiao. After their astonishment and mortification subsided, the world's strikers thought as one: "I wish I knew how to do that!" So to oblige, we look at the fascinating science of counter-punching to the finish.

A well-timed counterpunch can be as effective as a blow against an opponent who stands with his eyes closed and guard down, and invites you to fire at will. That is to say, it can be an almost guaranteed fight finisher. This finishing potential comes from two qualities of your opponent as he attacks:

1. Mentally, he is unable to process your attack and defend against it. This is because the human brain is unable to process two committed actions simultaneously. There is a split second while his mind is fully committed to focusing on its target, timing his body's advance, and anticipating impact with you. During this brief window, he is literally defenseless.

2. Physically, his momentum is careening towards you. This means that your counterpunch, if well-timed, could strike him with not just the force generated by your own punching action, but also by the force of his entire mass impaling itself upon your fist. In short, a successful counterpunch against an advancing opponent is literally twice as powerful as a normal punch.

To capitalise on these, the process of successful counterpunching can be broken down into three simple stages:

1. By far the most important aspect of a successful counterpunch is the mental decision to do so. This is because for most strikers, the reflex action when facing an attacking opponent is to block, parry, duck or otherwise evade his attack. This means that during that split second when he is vulnerable to a counter, you are keenly focused on your own self-preservation.

However, launching an attack after ensuring your own safety usually means the moment of opportunity has passed. To forestall this, you must overcome your normal defensive reflexes by consciously and decisively telling yourself before he attacks: "I am going to counterpunch him just as he moves in."

2. Plant yourself in your stance as he attacks. Having made the mental committment to counterpunch, the physical aspect should come naturally. Your opponent's advance is a signal not to retreat or commit to a defensive action, but to instead launch your own counter. This may be launched just before he fully commits, simultaneously with his attack, or in the split second after, but before he can compose himself.

3. Avoid his attack while you counterpunch. The risk in doing this of course, is that you focus more on your defensive action than your counter, meaning you fail to strike during the window of opportunity. One solution is to drill blocking and counterpunching simultaneously. An even simpler tactic is to simply ignore defense entirely and either absorb your opponent's strike, or rely on your counterpunching motion to move you out of his line of attack.

We'll now look at four fairly recent examples of devastating counterpunching. In each of them, we can identify the three distinct phases.

Gifs and analysis after the jump.