Georges St-Pierre is still enjoying a well-deserved vacation, yet questions about his future have become more unavoidable with each passing day.

By now it's assumed St-Pierre will choose between either succumbing to the pressure of an Anderson Silva superfight or making the next defense of his UFC welterweight title against Johny Hendricks. However, St-Pierre's head trainer, Tristar guru Firas Zahabi, recently weighed in on the subject to MMA Junkie, and his answer to the big question was somewhat surprising.

"I think (Nick) Diaz is the guy who deserves it most," Zahabi said. "His fight with Carlos (Condit) was so close. Who knows? People judge it both ways.

"[Diaz is] the guy who is the Strikeforce champion. He climbed up the ladder all the way. Johny deserves it very much, but Diaz has been there longer and done more fights and has bigger wins. ... If you want to be really fair about it, he is the guy who beat the most amount of names in the biggest fights."

At first glance Zahabi seems to have a point, since Diaz undoubtedly is the flashier name to slap on the pay-per-view poster. Diaz's recent résumé features a pair of electrifying wins over Paul Daley and B.J. Penn, along with a narrow loss to Carlos Condit. Not a shabby docket by any means.

But then you remember Hendricks just beat in succession the perennial No. 2 guy in the division, a recent title challenger, and the latest top contender -- two of which victories ended in a combined 58 seconds -- and it's hard to lend much credence to what Zahabi claiming.

If anything, Zahabi's words are likely just echoing the behind-the-scenes desires of St-Pierre. There's no doubting the Diaz brand would draw more pay-per-view buys than Hendricks, but besides that, who among us can forget that fateful night at UFC 137? A night when Diaz dug his claws so deep under St-Pierre's skin, the seething Canadian ordered UFC President Dana White to catapult Diaz back into the title picture just so he could "put the worst beating on him you've ever seen in the UFC." Anger that genuine doesn't just disappear overnight.

White to FOX fighters: Tone it down. Hoping to protect the year's biggest fight card from 2012's relentless injury epidemic, UFC President Dana White issued a message to all competitors booked for UFC on FOX 5, "Tone your training down a little bit. Let's not get anybody injured this last week and a half."

Aldo open to lightweight move. UFC featherweight champion Jose Aldo revealed that his blockbuster fight against Frankie Edgar could be his "last biggest challenge" at 145 pounds, saying, "If I can win [against] him well, then I can prove that I can go [to lightweight]."

Penn takes shot at St-Pierre. When asked about Georges St-Pierre's reluctance to accept a superfight against Anderson Silva, former champ B.J. Penn couldn't help but take a third-person jab at his rival: "That fight, that's on Georges himself. But everybody on this phone call knows what B.J. Penn would do. You know what I would do if Dana called me to fight the champion (in the weight class) above."

Sonnen 'ripped' at 240 pounds. According to nutrition specialist Mike Dolce, former middleweight and current TUF 16 coach Chael Sonnen is walking around at "240 pounds and ripped" in advance of his title bout against Jon Jones.

Silva's coach: 'It would be a crime' to fight at 170. Speaking with Sherdog, Rogerio Camoes, the strength and conditioning coach of Anderson Silva, said "it would be a crime" for Silva to drop to 170 pounds to meet Georges St-Pierre's demands: "He could make the weight, but the physical loss would be too great. ... The Canadian would have a considerable physical advantage if they fought at welterweight."

I can't lie, this Reem preview got me unnecessarily hyped for next year. (Click to watch.) 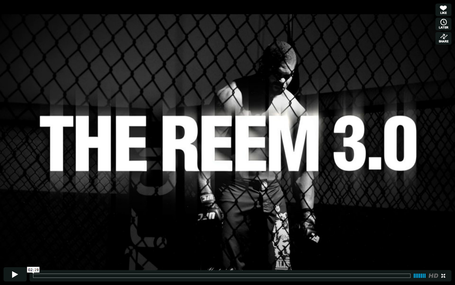 This is the kind of content I'd like to see more of from FUEL TV. Rashad Evans explaining Chuck Liddell's tell was a fascinating bit of fight study. (For international geo-blocked users, this might help.)

Want to know the easy way to make it on the Morning Report? Win any fight by a submission with the word "flying" in it. (For the lazy, jump to 13:50 to see the finish.)

Who knew Keith Jardine was such a convincing actor? (Possibly NSFW, check out the thumbnail and use your best judgement.)

Open your heart and let the soothing sounds of Mr. Tommy Toe Hold take you away.

So, yeah, uh, Casey Anthony... Anyone hit that yet?

It's raining outside so I pissed on the kitchen floor. Morning @jonfitchdotnet

Today's Fanpost of the Day sees sampark explore the effectiveness of: The Hellbow (Elbow)

Ah, the elbow. The infamous elbow that cuts and lacerates skins that also packs a punch. The elbow is a very "give and take" technique, which means you must give up positioning and distance to attack. The extended arm is the maximum range of your punches but to throw an elbow you must cut that range in half.

Throwing out a single elbow strike can be disastrous if you don't cover the distance properly. This is exactly what happened to Shinya Aoki against Eddie Alvarez.

If you look carefully, Aoki stepped right into range without even starting his combo with a jab to measure distance. You have to get your opponent to retaliate by covering up to land a successful elbow. The way Aoki staggered his stance into Alvarez's range was just asking to be countered.

Here, Jon Jones shows us the perfect setup for the elbow. The Jab - Elbow combo is a very useful setup as the jab covers distance and safe range for the small opening the elbow can sneak into. Notice how Jones throws a jab, then Rashad Evans paws with his lead hand expecting a straight right. Rashad expected a 1-2 with the jab but being the unorthodox fighter Jones is, he follows up with a lead elbow which buckles Rashad. As the combo finishes, Jones is no where near Rashad to prevent getting hit by a counter.

More analysis including a slew of brutal gifs after the jump...