A big left hand followed by a five-round war helped the picture came back into focus at 170 pounds.

UFC 154's top two fights demonstrated both that Georges St-Pierre, the champion since April 19, 2008, is still unquestionably the man to beat in the weight class, and with his one-punch knockout and fifth consecutive win, Johny Hendricks has earned his way to the number-one contenders position.

Condit, meanwhile, didn't fall far after his 25-minute, all-out battle in a losing effort against St-Pierre at UFC 154. Four of six pollsters voted the former WEC champ and UFC interim champ third, enough to give him that third spot with 48 points overall.

Each fighter ranked from fourth through eighth were named on all six ballots. Jon Fitch, coming off his win over Erick Silva, took fourth place with 35 points. Meanwhile, just three points separated fifth place from eighth, as Martin Kampmann taking fifth with 30 points, followed by Jake Ellenberger with 29, Josh Koscheck with 28, and Rory MacDonald with 27. 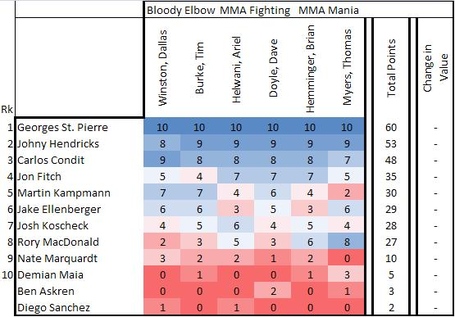 (Scoring: Fighters are given 10 points for a first-place vote, nine points for a second, etc., down to one point for 10th place. The results are then tallied up and presented here. Official SB Nation rankings policy: Fighters under commission suspension are ineligible to be ranked during the duration of their suspension or if they have licensing issues. At welterweight, the currently affects Nick Diaz, who is currently suspended by the Nevada Athletic Commission).