For years, Michael Bisping pleaded for a title shot. He'd state his case, then state it again, until inevitably some other poor soul would be the one slotted against Anderson Silva.

Only now, it seems, Bisping is sick of asking. While a title shot would be nice, he'd rather stay busy than twiddle his thumbs waiting for Silva to finish his cross-divisional adventures. Which is why, after hearing rumors of a potential meeting with Vitor Belfort sometime in early 2013, Bisping told ESPN UK he "would be more than up for" a fight against the Brazilian.

Following Bisping's win over Brian Stann in September, the assumption was the Brit would take on the winner of Chris Weidman vs. Tim Boetsch in a No. 1 contenders bout. Bisping, however, sees that as the far easier of his two options.

"I match up really well with both [Weidman and Boetsch]," he said. "Weidman's stand-up is very, very poor, it's not good at all. He's a very good wrestler, very good grappler, but I do well against those guys. I'd get back to my feet and knock him out.

"Boetsch, I don't particularly rank at all. He's just a tough bastard! I'd have my way with him all day."

In spite of his obvious confidence, Bisping acknowledged that while accepting a fight with Belfort would be the riskier decision, if that's what it takes to get back into the fold quicker, then that's what he'll do. This whole title shot business can work itself out.

"If I played it smart I'd wait for them to fight at the end of the year, maybe fight the winner in March/April, but I'm not prepared to do that," he finished. "... I want to fight somebody else in the mean time. I'll take my chance. If I win, great. If I lose, I don't deserve a title shot anyway."

Bisping open to trio of contenders. Middleweight contender Michael Bisping told ESPN UK that while a rumored bout against Vitor Belfort remains just that -- a rumor -- he'd be more than willing to fight either Belfort or the winner of Chris Weidman vs. Tim Boetsch. Bisping went on to say he'd "have his way" with Boetsch, and that Weidman's stand-up was "very, very poor."

St-Pierre sees knee injury as 'positive thing.' Speaking to the Calgary Herald, UFC welterweight champion Georges St-Pierre admitted that although his knee injury was initially devastating, it "became a positive thing at the end because it allowed me to correct my training and make it better and improve it."

Hendo talks Sonnen. Said Dan Henderson on the possibility of cornering Chael Sonnen in his title bout against Jon Jones: "Not sure. If he wants me there, I'm sure I would be there."

Varner vs. Guillard. A lightweight tilt pitting Jamie Varner against Melvin Guillard has been scheduled for the main card of The Ultimate Fighter 16 Finale.

Aldo injury a bone fragment. In an interview with UOL, Jose Aldo's coach, Andre Pederneiras, revealed a bone fragment in Aldo's left heel was the cause of his injury withdrawal from UFC 153. The injury resulted from a motorcycle accident in Brazil which was initially thought to be minor.

With American elections right around the corner, the UFC decided to take a different approach towards marketing their next pay-per-view. The end result: not too shabby.

And of course, the opposition:

Slow days call for a look back into the vault, and there's few clips with as much staying power as this one. Just imagine how the internet would explode if this happened in today's world. (Part 2 here.)

Bloody Elbow's own Nate Wilcox sat down with MMA legend Frank Shamrock for this extended interview, touching on everything from his troubled childhood and training under Ken Shamrock in the Lion's Den, to his feud with Dana White and a long-lost gameplan for fighting Kazushi Sakuraba. Subscribe to MMA Nation on YouTube to get all of Nate's interviews.

Most of you saw Felice Herrig's Street Fighter costume from this year's holiday festivities. But apparently Cammy was such a big hit, Herrig went ahead and recorded this.

That's it. Call off the fight. Jeff Monson wins Halloween. 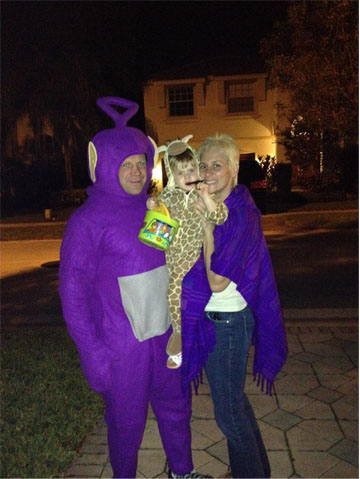 John Rushworth and the folks over at HavocStore put together this handy little infographic looking back throughout UFC history. (Click to enlarge.)

I will b doing a live chat tomorrow at 6pm PST on my new website MieshaTateMMA.com b sure to say hello!

When someone texts you to come back to the booth & do a photo op w/@snoopdogg you handle it. Nice meeting yah. #ContactHigh

Today's Fanpost of the Day sees heavyfl0w break down: Bellator: The Season Before Spike

Bellator's year-end campaign is the MMA version of the "Milton Berle Game". Allow me to explain.

This explanation requires two parts. The first is an old Hollywood tale (possibly apocryphal) about comedian Milton Berle participating in "Who has the biggest honker?" contests. He would always allow the other man to go first, look at what he had, and then pull out "just enough to win."

Hang on. This will all make sense in a second.

The entertaining sportswriter Bill Simmons took this story and coined the term "Milton Berle Game", which was reserved for NFL games where a good team would beat a bad team without really wowing anyone while doing so. They might hold something back because they had a really tough opponent the following week. The intensity level might not quite be there. They'd pull out just enough to win.

That's what this Bellator season is. There's just enough talent and good matchmaking to ensure that MMA fans wont forget that it exists. Believe me ... it's juuuust enough.

Bellator is making it's debut on Spike TV in January. They'll be giving up their spot alongside terrible shows like Parental Control to join another lineup of terrible shows like MANswers and 1,000 Ways To Die. More important (and less snotty), they'll be moving from deep cable onto premium cable, and they'll be taking the place that the UFC once held with The Ultimate Fighter and various PPV prelims.

But first, they have to trudge through this season, which is truly Milton Berle-esque. Rich Clementi and an unproven Russian prospect in the main event? Sure! Would you like another?

Check out the next three Bellator main events: Lyman Good vs. Michail Tsarev, Rich Hale vs. Thiago Santos (How is this not Eric Prindle? I want to see those two fight until neither of them can have kids) and Owen Evinger vs. the specter of Joe Warren (whose body is still slumped against the cage at the Horseshoe Casino in Hammond, Indiana, possibly gathering layers of rock).

I'm just giving Bellator a hard time. I totally understand why they're taking this course of action. After all, why throw all your best guys onto a network that you're about to vacate?