UFC 154 had moments where everything fans love about mixed martial arts crystallized in a scintillating main event between the hometown hero and the dangerous challenger. Alas, there were also moments before that of unexplained officiating, infrequent action and other regrettable realities of modern MMA.

Let's recap the best and worst, the winners and the losers as we try to separate the signal from the noise from UFC 154.

I don't think people understand just how miraculous GSP's victory was on Saturday. Our own Dave Meltzer said on his Wrestling Observer News podcast that St-Pierre was only cleared to begin MMA training 10 weeks prior to the fight. All reports indicate the first four weeks were a disaster for the welterweight champion, but he apparently turned things around after that and had six full weeks of meaningful fight training.

Let's think about this. GSP was out for nearly 19 months and he was out due to an injury that can permanently alter a career in the most negative of ways. GSP returned after this layoff to face the interim champion on what is arguably only 6 good weeks of fight training.

The level of achievement GSP reached on Saturday evening is frankly incredible and made all the more remarkable when we acknowledge the sturdy challenge offered by Condit. He created a scare moment in the third round and all the while made it exceedingly difficult for GSP to gather any offensive momentum. Condit lost and in many ways still had the performance of his career. GSP emerged as the star he entered, but Condit took things from GSP that night. He'll be a more popular attraction and a better fighter for it.

In a way, it's lame to heap accolades normally reserved for those who fly under the radar on the headliner; a headliner who is arguably the biggest name in the sport. But when you inventory the almost Sisyphean climb and grasp the pressure GSP faced, the way in which he ultimately performed is nothing short of career defining in most brilliant of ways.

According to protocol in Montreal, referee Dan Miragliotta was within his rights to stop the fight, review it on instant replay and change the outcome after determining Sakara's punches to the back of the head adversely and unfairly determined the outcome. It's a weird process and I wish the UFC would've shown him watch the video replay for the sake of continuity, but at least everything went according to the rules.

Still, I wanted to get a sense of how that might've been handled stateside (note: not all states operate under same set of rules). I spoke to Nick Lembo, counsel for the New Jersey State Athletic Control Board. He tells me another way that could've been handled is if first, the bout is halted and a foul is called. The foul would have to be declared intentional or accidental. If there was any injury due to foul, a referee would call the ringside physician to examine the downed athlete. From there the referee could issue a warning, take a point or two or even call the bout. If the foul was intentional, Cote could be declared winner.

It should be noted, though, this confusion and odd resolution is a function of the growth of instant replay. Not just in Montreal, but in New Jersey, too. Had that fight taken place in the latter location, a referee could've done what Miragliotta did: stop it as a win for Sakara, review the tape and change the outcome in favor of Cote.

All of this is to say the guidelines for instant replay review and procedure are, on balance, good for the sport. But there's such unfamiliarity and inconsistent use that the entire MMA audience doesn't know what is and isn't an application of the rules. 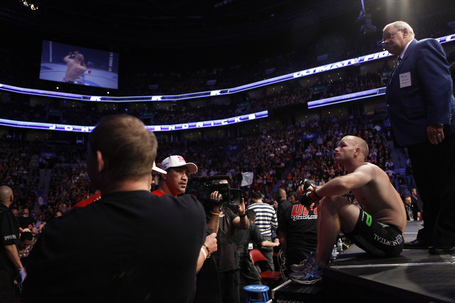 This is my favorite photo Esther Lin took on Saturday evening, which is saying something. I normally put together her photo galleries on fight night and of all the evenings I have done it, I thought her work on Saturday was her best (aggregately speaking).

There's almost a Norman Rockwell quality to this shot, minus the romanticism of America's past traditions. I don't mean it captures the everyday scenario everyone can understand or remember. But one does get the sense we're witnessing an intimate, momentary peak into a common practice of fighters who've recently lost. There's feeling of routine to it. Kampmann's done this before. Others probably have as well.

It's also a shot that reveals both the despondency of Kampmann while underscoring his courage. He's seated in disbelief. He literally is watching to figure out what happened. He likely has no recollection and just lost a hugely important bout in his career. Yet, there he is, curious to pinpoint where he erred. Ever the strategist, ever willing to face sobering reality.

If you've never watched college wrestling, you just don't appreciate this moment. Johny Hendricks, the everyman hero? Since when?

In case you didn't know, Johny Hendricks used to be hated. I don't mean disliked. I mean thoroughly despised by everyone in college wrestling outside of Stillwater, Oklahoma. As a standout wrestler for John Smith and the Cowboys at Oklahoma State University, Hendricks was outspoken, brash and an instigator of opponents. Top that all off with being an utterly dominant wrestler and the admixture transformed him into everything there was to loathe about talented-if-arrogantly entitled athletes.

But the transition from college wrestling to MMA is often like the whitewash one gets in witness protection program. It's as if the world forgot about the identity Hendricks carved out for himself. On the heels of his spectacular win on Saturday, Hendricks' 'aww shucks', country huntin' man persona and Brawny paper towel man beard are turning him into a wholesome, folksy hero. Sure, he's turning in praiseworthy performances in the Octagon, but this is a guy who loves his family, Bass Pro Shops and venison. For a certain swathe of America, what's not to love?

Gone is the antagonism. Gone is the ownership of villainy. Gone is the intentional chest poking and instigation. I don't know if it's maturity or that college wrestling and MMA don't share the same audience or something else altogether. Whatever the case, it's almost funny to see who Hendricks is today and how there's no connection to the very recent past.

And yet, Bellator welterweight champion Ben Askren - once a hero in college wrestling - is now hated. Go figure.

Prior to facing Rafael dos Anjos, the only fighters Mark Bocek ever lost to were Jim Miller, Frankie Edgar, Mac Danzig and Ben Henderson. Two of those four were or are the UFC lightweight champion. Danzig was being routed before a surprise comeback. Miller never fought for a title, but came close and is widely regarded as an elite lightweight. Translation: with very limited exception, only the best can beat Bocek.

That's why dos Anjos' victory Saturday deserves serious praise. He joins fairly elite company among those who've bested Bocek. And the stifling manner in which he did it is made all the more impressive when one looks back as his inauspicious UFC beginnings. This was a man who dropped his first two appearances in the Octagon, one by being finished and the other by a fighter no longer even on the roster. Sure, he rebounded against good if flawed fighters, but lost again when facing the better among the bunch.

Somewhere along the line, though, he continued to improve and not just in one dimension of the game. His takedown defense is superb and his striking fundamentals locked in. His improvement reminds me of the progress we saw in the career arc of Kenny Florian.

Will he ever contend for a title? We'll see. What I do know is if you'd asked me that question a few years ago, the answer was an obvious 'no'. Now it's at worst an 'I don't know' and defensibly a 'yes'. What a career progression.

I'm not saying this to be mean. I'm not saying this to be cruelly disparaging. I don't hate or dislike Mike Goldberg. In fact, I sat next to him at the weigh-ins at UFC 145. It'd be euphemistic to say he's friendly. All indicators are that he's as genuine as one can find in this business. I hope nothing but the best for him and I sincerely mean that.

But his commentary is bad. It's bad in part because there's a forced imbalance in UFC broadcasts. I'm told UFC brass prefers to upend the traditional role performed by the play-by-play commentator in favor of giving more air time to the color analyst. That allows the color man to shine, but unfairly places the play-by-play commentator in the awkward and diminished role. In that sense, this is not Golderg's fault. If he's a hype man, it's partly because the UFC won't really let anyone in that role rock the m-i-c.

Yet, there are matters for which he is more directly responsible. On Saturday, he was either mispronouncing names (he called Azamat Gashimov 'Gashminov' multiple times) or regurgitated ad infinitum bits of technical insight he recently heard. He often does so when they don't even apply. Where he once called wrestling turks over and over when they were actually more basic leg rides, he elected to call 'head off center' after UFC bantamweight Dominick Cruz used such a description to explain Rich Franklin's loss to Cung Le. This isn't an exhaustive list of what I didn't like, but stand out as the two most notable offenses from this past weekend.

Given the imbalance he faces as a play-by-play man for the UFC and the editorial upkeep expected as the inhouse commentator, I wonder if Goldberg or anyone in MMA can truly be great in that role. But I'm not asking for greatness. I'm asking for the maximization of an admittedly difficult position. I know Goldberg's capable of more. It's time we get to see it.

Whenever you witness the 50/50 guard used in MMA, that's something to behold. I know this has nothing to do with UFC 154, but I'd be remiss if I didn't pass this along. This doesn't quite reach the frenetic speed chess level of excitement pulled off by Alan Belcher vs. Rousimar Palhares, but it's worth a view nevertheless.