In case you hadn't heard, Cris Santos can't make 135 pounds. True story. Yup, nothing about this seems fishy at all. Cyborg is simply doing her due diligence and following medical advice. What more can you ask?

If you believe any of this, I've got some ocean-front property in Idaho to sell you.

I don't know if the MMA world is more gullible than others, but some days it often seems that way. Has no one considered the possibility this is all just media manipulation in the attempt to achieve an end? The initial report about Cyborg is literally just her camp's word with no documentation. Moreover, it's the espousal of a position she's already claimed she's sticking to, now with 'corroboration'. People actually believe this stuff?

It's the same with Anderson Silva and his various claims about wanting a stake in the UFC to take certain fights or sitting out long portions of the year. You guys know those are just negotiating ploys to get what he wants, right? They're not actually real.

Let me say, though, there's nothing wrong with fighters doing that. If you've got a position you want to achieve, why not try to achieve it? Why not work the media and the fans to your advantage? Do what you have to do. That doesn't mean we have to buy into it all, but it also doesn't mean there's anything wrong with trying.

Rousey's camp has challenged Cyborg's latest round of claims, as well they should. As I've been saying this morning, this is all just a struggle to get what the various camps want, not a truth-telling contest. Who will prevail in this one? Time will tell, but I can say this with confidence: the MMA community need to get better (or more publicly honest) about detecting what is quite obviously something said that is not true or dubious in the name of achieving a larger end.

Johny Hendricks has the most important bout of his career this weekend when he tangles with Martin Kampmann at UFC 154. Before we get there, join Hendricks as he takes a look back at his first career loss to Rick Story and what it all meant.

Glover Teixeira is set to face Quinton Jackson at UFC on Fox 6 next year, so hey, why not train with Lyoto Machida to make sure you're ready?

On the surface, ratings for UFC Macao on FUEL were not great, but in context, they are actually right where you'd expect them.

Eddie Yagin was supposed to face Denis Siver at UFC on Fox 5, but recently suffered a brain injury in training and has been forced to withdraw from the bout.

Chris Weidman, like many other fighters, has a few outrageous opinions in the MMA world. The most recent: he believes Brazilian fans want Anderson Silva to lose.

From the files of how many angels can fit on the head of a pin, here's Dolph Lundgren saying 'Drago' could crush Anderson Silva:

How did GSP and Carlos Condit get to this point? We look back in their road to the title:

Jon Fitch might know a thing or two about welterweights and he believes GSP is going to retain his title:

Bloody Elbow's Nate Wilcox sits down with 'The Bull' John Makdessi ahead of his impending UFC 154 bout:

NOT AS BAD AS PEROSH'S TOE

This is what happens when you check kicks and don't condition your shins. fb.me/1YPgujXgj 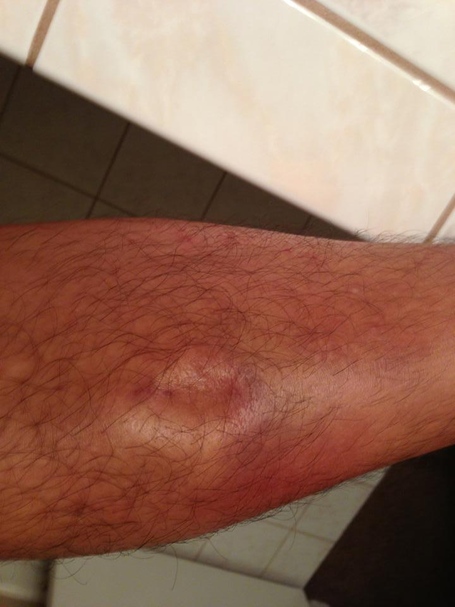 VINNY C. ON THE HUNT FOR OPPONENTS

I want a fight that'll move me up in the rankings, preferably somebody coming off a win, preferably a big name, who's available? @ufc

not asking 4 a contender,i know my place. but there r other guys in the div. that arent top contenders, that could move me up in the rankngs

JDS IS KILLIN' THE GAME

Read the entire Tweet, namely, what Ortiz is responding to. Trust me.

Cool i hope someone could can takecare of her. Its wasnt fun at all RT @mmaanytime: @titoortiz (cont) tl.gd/k0dbe4

And here I thought what we shared was special. RT @fightersonly Video - GSP: "The first time I had sex... I'd rather not remember it..."

I DOUBT IT WAS PRESIDENT OBAMA

Greeeattt! I'm getting lectured again cuz of my tweets. Obama prolly called Spike TV or sumtin. I'll be back later, I'm on time out.

Excited to see my teammate @cowboycerrone finally get the fight he wanted: ow.ly/ffNWY

Today's FanPost of the day comes courtesy Steve Borchardt who tackles the thorny issue of whether it's acceptable for Michael Bisping and Vitor Belfort to fight for an interim title if Anderson Silva sits out most of 2013:

Therein, however, lies the rub for Michael Bisping. He knows that with a victory over Belfort in an interim title match he can punch his ticket for a fight with Silva whenever the unpredictable champ decides to defend his belt again. "The Count" has assembled an impressive resume during his time in the UFC but a title shot has always remained just outside his grasp. At 33 years old, and with the temperamental Silva nowadays putting the tile up whenever he damn well feels like it, this might be Bisping's last, best shot at capturing championship gold.

Of course the question remains, does he - or for that matter does Belfort - deserve to challenge for a championship at the moment? Belfort is coming off a trouncing at the hands of Jon Jones and was outclassed in a bout with Silva back in February of 2011. Bisping won his last fight against Brian Stann, but before that he lost via controversial decision to Chael Sonnen. He has a stronger case than Belfort in that many felt Sonnen was lucky to walk away with the decision when they fought, but if we're booking meritoriously here then there are stronger contenders than Bisping waiting in the queue.

Assuming Silva is indeed sitting out for the next year or so the upcoming Chris Weidman/Tim Boetsch fight makes more sense as a title eliminator. That way the division keeps moving forward while Silva channels his inner Steven Seagal and, more importantly, the integrity of the middleweight title remains intact. It would be a real shame to tarnish the legacy of the belt with an interim asterisks in the history books after the epic six year-plus reign Silva has been on.

Whoever the next man is to have Dana White strap the middleweight title around his waist, here's hoping he's earned it by proving he's the best in the world rather than just the best of all available options.