Signal to Noise: UFC on FUEL 6's best and worst

From the phenomenal grappling of Dong Hyun Kim to the unbelievable first-round knockout of Rich Franklin by Cung Le, UFC on FUEL TV 6 had a lot to offer. Of course, there was also terrible judging, bad reffing and a host of other problems with the UFC's first show in China. Let's take a moment to separate the winners from the losers, the best from the worst and the signal from the noise.

Cung Le has had one of the strangest and most delightfully fun careers to watch. Le is a guy who was never supposed to be accomplishing what he is, especially at this age. He had a strong career in San Shou and kickboxing prior to MMA and was largely a recruitment tool for eyeballs on Strikeforce when he was signed. Slowly but surely, though, he succeeded in moments and in ways he was supposed to. He knocked opponents out in spectacular fashion and dazzled audiences with this flashy style all along the way. Sure, he had his setbacks including the loss to Scott Smith, but he always stayed positive, always kept busy and always kept plugging along the way. There was always hyperbole around his career (Gus Johnson was the worst offender here), but Le never cravenly used it much for personal gain.

I don't suspect Le will be able to do much against the UFC's roster of elite middleweights, but the fact that he's even in the discussion with them tells you how far he's pushed the impossible. Knocking out Rich Franklin, and doing so in the first round with a brutal punch, is unequivocally the highlight of his career and his most significant win. Even if everything stopped here for Le or he suffered a brutal defeat in his next fight, the heights Le achieved already far outstrip the expectations others had when he began this MMA journey. He did much of it all on his terms and displayed a pleasantly 'aww shucks' attitude the entire time. That's about as good a career as any professional athlete could ever hope to attain.

Most Novel Way to Cover Fights: Setting the alarm

I can't speak for our staff on the West Coast, but I thought setting the alarm for 6 a.m. ET was a fun little treat. At some point when you've covered MMA, it all becomes routine. You go through the editorial cycle, talk to the fighters, do the interviews, write the columns, Tweet the results and whatever else you do week in and week out. I'm not complaining exactly, but there is a certain monotony to it all.

And then something like Saturday comes along where the timing of your very ordinary routine changes up entirely. It's not the same as traveling to Macau, of course, but variety is fun. And hey, all of the action was over before the first snap on a college football Saturday. That left a huge portion of the rest of the day for extracurricular activities. I was never a fan of the Japanese MMA fan nerdom, but I can at least sympathize with the idea of watching MMA in moments where everything is upside down adds an interesting novelty to the experience.

Seriously, could these two stand fighters up quicker? Why even let fights go to the ground? Why make positional advancement a criteria of scoring? What's the point in worrying about ground activity when you're unwilling to let it happen?

Without going too much into detail, suffice it to say there are seemingly countless examples from Saturday's show where both Perceval and Goddard abruptly and without cause stood fighters up on the ground for a perceived lack of activity. If you didn't see the fights, take my word for it. And if you did see the fights, you saw exactly the heavy-handed trigger fingers those referees had all night long that I did.

Perceval has never been a particularly remarkable referee, but I've definitely seen better from Marc Godddard. It's almost as if bad referees tend to be influencers or bellwethers for their fellow referees. They lead by example by making utterly questionable if not outrageous calls and somehow their 'badness' rubs off on their officiating peers. It's just a theory. I don't have any evidence other than what I can cobble together anecdotally, but this is just madness.

The guy is just not a UFC caliber fighter. Period. I know he's important for the UFC and their efforts to make headway into China. I'm really not even calling for him to be cut, if for no other reason than that. But the UFC is going to have an extraordinarily difficult time finding him someone he can beat without abandoning basic standards of quality in acquiring new talent. Worse, his bouts have moments of titillation followed by hard doses of reality. What's the fun in that? If there's anything the UFC offers, it isn't the sense of inevitability in their bouts and yet, Zhang brings precisely that. It's like the Harlem Globetrotters vs. Washington Generals dynamic except the Generals are trying and still keep losing.

Least Likely to Get the Grappling Accolades He Deserves: Dong Hyun Kim

I don't know if I buy the theory that jet lag is a large determinant of sub-standard performance from East Asian fighters when competing stateside. It's not that dealing with jet lag is fun or without challenge, but whatever positive correlation there is between jet lag and performance is arguably only accidental.

Whatever the case, UFC welterweight Dong Hyun Kim didn't have to deal with it and looked positively phenomenal on Saturday. He was the betting favorite, so the win wasn't unexpected. But the dominance of the win in both it's breadth and technical detail was stunning. He manhandled a rather tough and talented jiu-jitsu black belt in Paulo Thiago as if it were little more than a night of sparring against a helpless purple belt. He controlled every phase of the grappling contest from underhooks and overhooks to takedowns to passing to maintaining top position in scrambles and so much more. As I noted on Twitter on Saturday, a knockout loss can really shake a fighter up, but Thiago's way of losing was probably equally humiliating.

If someone were to ask you to name some of the best grapplers in the UFC, there's a strong chance that Kim wouldn't make as many lists as he should. That's quite a shame. I don't know if he'll ever contend for a title, but he's supremely skilled and easily one of the better mat men among the ranks of many talented grapplers currently competing in the UFC.

I'll save the career obituaries for when Franklin actually retires, but it's fair to say he'd be a 'first ballot' hall of famer if the UFC handled voting on such matters like the MLB. In the infamous video with Dana White where he attacked Loretta Hunt and used the six-letter f-word, he also said something rather poignant: Rich Franklin has fought the best fighters in the world.

It's really true. Franklin's resume is an incredible thing to behold. Sure, he beat opponents who he clearly outmatched at times or took fights that didn't always make sense for his career. But along the way he also fought a who's who of elite talent and did so in two weight classes. He came out the loser fairly often, but has his share of scalps, too. Over just about anything else, this is Franklin's most important accomplishments: the unreal strength of schedule he faced. What a courageous and bad dude this one-time math teacher actually is.

As long as judging in mixed martial arts reminds us of the woeful saga of replacement refereeing in the NFL and will continue to do so seemingly without end, bellyaching about its cause seems like a waste of time. Still, it's worth taking inventory of which judges do a poor job, event by event.

From Saturday, we have two entrants into the comically bad judging hall of fame. Bass Singh somehow managed to score Alex Caceres vs. Motonobu Tezuka 29-28 for Tezuka. The other two judges couldn't even give Tezuka a single round, nor anyone else capable of judging MMA contests. Tezuka was hugely outstruck in all three frames, did nothing with the one takedown he earned in each of the first two rounds and had a less than 25 percent success rate on takedown attempts, but hey, who's counting?

Aaron Chatfield went the other direction. He admittedly got the decision right between Takeya Mizugaki and Jeff Hougland, but got a tad bit overboard. Chatfield scored the second and third rounds as 10-8 frames. Admittedly, they were dominant, but it's hard to see either of them as meeting that special threshold. Hougland was covering up in defensive postures and trying for submissions for long portions of the round. Those are not hallmarks of 10-8 drubbings. Again, he ultimately made the right call in terms of who won or lost (although, it's hard to see how anyone couldn't in this particular scenario) and I admire in the courage to use a 10-8 score. But there's criteria for them and these rounds didn't really meet them, especially since Hougland was never really rocked and Mizugaki almost exclusively worked from Hougland's guard.

Don't even get me started on the judges who gave Thiago Silva the second round of his bout with Stanislav Nedkov. Just don't. 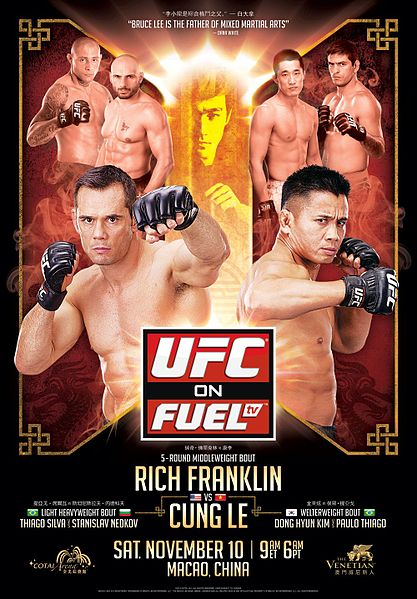 Someone please help me understand why Bruce Lee is on this poster. I mean, it's sort of obvious, right? Lee was a big martial arts action star in both the U.S. and China in his heyday. The UFC is trying to make the connection between the popular Lee's teaching and legacy and the rise of modern MMA as witnessed through the UFC. Ok, great. It's still awkward, totally out of place and utterly forced. It doesn't signify anything other than "Hey, look! You know that Bruce Lee guy, right? Our product is tangentially related to him!" There's definitely no dubious historical narrative being leveraged for Chinese market entry. Not one bit.