The dead weekends that follow an extended stretch of fights always feel a bit weird now. With the UFC's touring schedule hiked up to a seemingly relentless pace, four straight weeks of anticipation of violence and then fulfillment of that violence tend to create a bizarrely fun temporary routine. The abrupt removal of that routine can either be jarring or much-needed, depending on the quality of the four weeks of fights. And in the case of this past weekend, I'd say it was a little bit of both.

Sure, it was odd not having a big match to look forward to, but it was also a well-deserved chance to refresh the batteries. So now that it's over and done with, let's jump back into some headlines and catch up on anything you might have missed.

Tate calls out Rebney, Bellator. Former Strikeforce champion Miesha Tate ignited a public campaign on Twitter after learning of Bellator women's strawweight champion Zoila Gurgel's omission from the main card of Bellator 78, which takes place in her home state of Ohio. Tate directly targeted Rebney, calling the decision to slot Gurgel on the un-televised undercard "absurd," and advised her 62,000 Twitter followers to rally against Bellator.

Misaki to retire. Longtime Japanese veteran Kazuo Misaki will retire from mixed martial arts after fighting at DEEP's December 22 Haleo Impact event. When asked for the reason for his retirement, the 36-year-old Misaki explained, "I should probably stop while I can, before I become too physically damaged."

Strikeforce in question. Following an unceremonious end to their 2012 campaign, Strikeforce officials and fighters have been left in limbo wondering what happens next with the failing promotion.

UFC fight bookings. A trio of notable UFC bookings announced over the break included Phil Davis vs. Forrest Griffin at UFC 155, T.J. Dillashaw vs. Mike Easton at UFC on FOX 5, and Dustin Poirier vs. Jonathan Brookins at the TUF 16 Finale.

Our own Mike Chiappetta and Luke Thomas and ESPN's Chuck Mindenhall join Ariel Helwani on the fourth episode of The MMA Beat.

I have no idea why this is entertaining, but I've watched it three times already.

Daniel Cormier telling his Jon Jones story on MMA Uncensored Live: "At the Chael Sonnen fight, he walked up and got to his seat, and he asked me, 'Hey, are you going to 205?' I said, 'Yeah, we're gonna have to fight.' He goes, 'Good, cuz I'm ready for you.' So, obviously this is a fight that he actually thinks about. But I guess it just doesn't work for him right now." (Click to watch complete episode.) 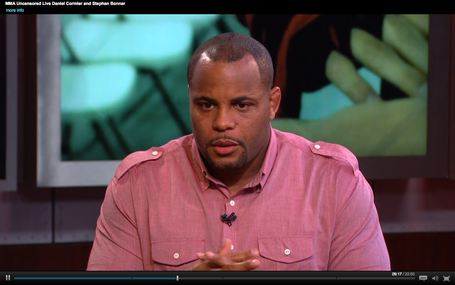 Prebek has outdone himself with this one.

If u think its absurd that @bellatormma put their current CHAMP @zoilagurgel in her hometown on the undercard tellem & @bjornrebney PLEASE!

@mieshatate ...a turning point in my career, & 4what U mean 2 the sport. U are an amazing ambassador 4 #WMMA Tons of Respect 2 u lady. No BS

Every day is a fresh start! The past doesn't matter. I'm training like a champion every day because I am one.

My life is a reality show for God

I know I'll never accomplish anything I can't first see in my mind. I see me as champ again. I'm training for it! You heard it here first

I DEMAND AN INVITE

This is my medical marijuana license I don't take other medications, so don't hate twitter.com/riddletuf7/sta…

Today's Fanpost of the Day sees Marc Donnay ask: It's early days, but could Glover Teixeira be the answer to the Jon Jones Conundrum?

How do you beat Jon Jones? If you conducted a poll of the most popular thread topics in MMA website forums over the last year, I would hazard a guess at this being at least in the top three, if not at the number one spot. Reading pretty much any discussion on the topic reveals how what started off for many fans as brief observation has now become more of an obsession, as Jones' every step, strike and feint is meticulously analysed in an attempt to formulate the perfect theoretical game plan to bring down the champion.

It's become the MMA community's equivalent of the classroom full of maths nerds scratching their heads and sweating under the pressure of a blackboard equation that they are simply unable to crack. And the worse news? The Jon Jones Conundrum is becoming increasingly difficult to answer with every one of the champion's dominant victories.

Belfort was....well, he was branded by nearly every observer as a middleweight who had nothing more than a punchers chance as hope for a legitimate challenge to Jones quickly dried up. Ironically of course, The Phenom came the closest - in fact, he came within seconds of capturing the title and breaking Jones' arm, but the champion ultimately did what champions do: he found a way to overcome adversity and win. Again.

They all stepped to the champion and they all lost, but that wasn't the only common thread connecting their performances: each challenger also showed a reluctance to take risks to win. They seemed too content to wait for openings to come rather than creating them themselves.

Of course, a fighter like Machida has a style which is predicated on his superb ability to counter his opponent's attack, it banks on - as Joe Rogan described it after Machida's most recent win over Bader - a fighter "rushing into the wood chipper" and then paying the price. Despite Machida arguably winning the first round against Jones, it was ultimately a redundant strategy to employ against a fighter who is more than happy to pick his opponents apart from the outside - as he quite brutally displayed against Evans.

The shared reluctance to draw first in their title duels seems to be about more than just a failed fight strategy on the night. Rampage is big in Japan, and was power-bombing foes in the Pride ring at a time when Jones was barely out of high school; Machida was being schooled in Karate by his father before Jones was born; Belfort had held a Ju-Jitsu black belt for nearly as long as Jones had been alive; and Evans wasn't ready to be schooled by the guy he once looked down on as his prodigious, yet still very green little MMA brother. These were respected fighters with long, storied careers, either not willing or fully prepared to take too many chances if it meant being made to look a fool by the new kid on the block who had only been training in MMA for around four years.

When it comes to the question of how to beat Jon Jones, it seems necessary to consider the mind-set and intangible aspects of the challenger as much as his game plan in the octagon.