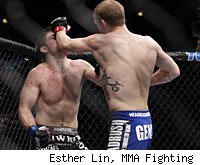 After two rounds of hard-fought action at UFC on Fox 2, Nik Lentz couldn't make it for a third, with Evan Dunham defeating Nik Lentz by technical knockout.

Lentz looked good in the first round, but in the second round Dunham battered his face with hard shots, and when the doctor examined Lentz after the second, he advised referee Big John McCarthy to stop the fight.

"In the first round I felt like I was a little bit flat and came out slow," Dunham said afterward. "One round doesn't determine the next, so I came out for the second round knowing if I had him on the ground I just needed to be aggressive. I was hoping for a third round because I thought I had him."

The win, Dunham's second in a row, improves Dunham's professional MMA record to 13-2. Dunham isn't quite a Top 10 lightweight, but he's an impressive fighter who is continuing to improve. He has big fights in his future.

As for Lentz, who falls to 21-5-2 in his career, it's tough to see where he goes from here. With two losses and a no contest in his last three bouts, Lentz's job in the UFC may be in danger.