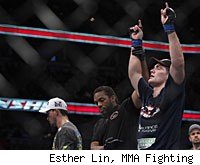 CHICAGO -- Chris Weidman is still undefeated, and he has just earned the biggest win of his MMA career on the biggest stage.

Weidman, who accepted his fight with Demian Maia on UFC on Fox 2 on just 11 days' notice, came through with a split decision victory, improving his record to 8-0. Two judges scored the fight 29-28 for Weidman, while one scored it 29-28 Maia.

The win was big for Weidman, but it was not a particularly good fight: Both men seemed tired and tentative, and the crowd booed through long stretches of it.

Weidman briefly knocked Maia down in the early going and seemed fairly comfortable standing up, and with a minute to go in the first round he surprisingly took Maia down. Maia quickly got back to his feet, but it had to be a big confidence boost for Weidman that he could go to the ground with Maia and not find himself in any trouble.

Early in the second round Weidman took Maia down again, and again they didn't stay down long but Weidman found himself none the worse for wear once they stood back up. By the midway point of the second round the crowd started booing, as neither fighter was taking a lot of chances standing up. Maia started landing combinations late in the second and appeared close to winning the round, but at the end Weidman executed an impressive takedown and may have done enough to take the second.

There was more booing in the third, as both men looked exhausted and out of gas and it turned into a sloppy kickboxing match. The Chicago crowd that had loudly cheered throughout the preliminary fights gave thumbs-down to both Maia and Weidman as the fight ended. That wasn't the way the UFC and Fox wanted to kick off Saturday night's televised card.