Seven Ways of Looking at UFC on FOX 2 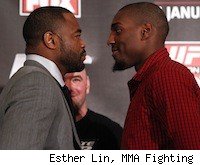 The UFC returns to network TV with the UFC on FOX 2 tonight in Chicago, and there are plenty of questions, concerns, predictions and pointless musings to occupy us until then. Here are seven of them, in no particular order.

I. Will the average network TV viewer even know what to make of this Chael Sonnen character? Imagine you're John Q. Public, flipping through the channels on a Saturday night in search of one of those shows where people either sing or dance or lose weight, and instead you stumble upon this guy with the jawline talking like a slightly more coherent Ric Flair in his pre-fight interview. Then he goes out and climbs in a cage to fight some guy who sounds like the chimney sweep from Mary Poppins, all while the dude from Fear Factor shouts into a microphone about how exciting it is. If you've never seen this before, would you have any clue what to make of it? Would you even know whether it was real? Would you keep watching it in an effort to figure it out? Or would you conclude that this is the latest terrifying development in a modern world that becomes more alien to you with each new day, and resolve to keep flipping through the channels until you find some calming program about whales and cheetahs and crap? I can honestly say that I have no idea how some first-time viewers will solve this little crisis, but I'm betting that it will result in some hilarious phone calls and emails to younger, hipper relations as they attempt to figure it all out.

So that singlet is Penn State's championship singlet, one that only gets broken out if a guy wrestles in the finals. Since Davis wrestled in the NCAA finals twice, he has at least one. Most schools have them, but PSU's is very recognizable because they don't have a ton of singlet options, like other schools. As a fellow Big 10er, Evans would know that. Wearing that one, and not Penn State's more traditional dark blue singlet, was a sly way of Davis saying, "Yes, I am the better wrestler."


Somewhere in the darkest room of his mind -- likely one he doesn't like to enter -- Evans probably knows that Davis would beat him in a wrestling match. He also knows that they aren't scheduled for a wrestling match on Saturday night, as does Davis. It's just a question of which of them is using this wrestler jock nonsense as a head game, and which is starting to buy into it.

III. Ratings-wise, the UFC has a lot riding on a bunch of grapplers. Of the six fighters slated for the FOX portion of the fight card, only Michael Bisping cannot be fairly described as a ground specialist, and most people expect that to be his undoing in this fight. That sets us up for a different kind of night than the first UFC on FOX event, where viewers were treated to a microwave fight between two hard-hitting heavyweights. Anybody can understand big guys punching each other in the head, but will the network TV audience appreciate the jiu-jitsu prowess of Demian Maia or the tricky takedowns of Chael Sonnen? Ideally, ratings should climb over the course of the two-hour broadcast as we near the main event, but that may depend on what kind of show the first two fights put on, and how viewers respond. Is America ready to appreciate technical grappling? Will they geek out over a half-guard sweep and call all their friends to tell them to put on FOX right now? I'm not so sure. But again, this is what FOX signed up for. Now they're going to get it.

IV. Have you complained to your cable provider about not carrying FUEL TV yet? That's where tonight's UFC prelims will be broadcast, and yet it's still available in just a fraction of the homes that Spike TV is. That's caused some griping from fans who don't get FUEL, which might be precisely the point. Back when the UFC was negotiating a new TV deal, a Spike TV executive I spoke with shrugged off the possibility of reaching a new agreement with the UFC, saying, "The UFC wants their own channel." With FUEL -- an obscure cable network with programming that seems to consist of little more than kids on snowboards doing their best to act "extreme" -- they sort of have it. Maybe that alone will convince some people to actually care that it isn't an option with their cable provider.

V. February 21, 2009. That's the last time Demian Maia submitted an opponent in an MMA fight. That opponent just happened to be Chael Sonnen, and the triangle choke finish netted Maia his fourth Submission of the Night bonus. Since then Maia has lost two fights by decision and one by knockout. He's also won four fights by decision, but used his jiu-jitsu sparingly in all those efforts. Has the competition just gotten that much better, or has Maia turned away from the skills that got him here in an effort to become more well-rounded? Probably a little of both. But if Maia could submit Sonnen and make it look easy, he could probably do the same to many, many others.

VI. Don't look now, but Mike Russow is undefeated in the UFC. How did this happen? Well, he edged out Justin McCully in his UFC debut, then took a tremendous beating from Todd Duffee before landing the one magical punch that changed everything. Finally, he got a doctor's stoppage win over Jon Madsen last spring, making him a perfect 3-0. That makes Russow perhaps the best, least heralded heavyweight on the roster -- at least on paper. It should be interesting to see how long that lasts.

VII. Chris Weidman did it. He dropped 32 pounds in 11 days and got himself ready to take on the biggest opportunity of his young career. My question is, in doing that, did he leave himself any time and energy to prepare for the fighting portion of this bout? Granted, he's a professional and he's in the gym all the time -- I get that. But Maia can be a tricky guy to prepare for. If you have to put so much effort into losing all that weight, you might leave yourself very little opportunity to work on things like game plan and strategy. That's not to say he can't win on the skills he had when he got the call from the UFC. It just means he probably didn't have a chance to add any more arrows to the quiver.