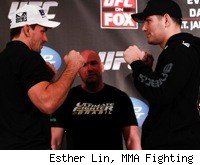 CHICAGO -- Considering Chris Weidman's wrestling prowess and Demian Maia's jiu-jitsu mastery, there's a strong chance their middleweight bout at UFC on FOX 2 will be decided on the ground.

Now Maia has already shown he's one of the most dangerous submission artists at 185. But what about Weidman? Coming off back-to-back submission wins, can the prospect make it three-in-a-row against one of the best jiu-jitsu artists in MMA?

John Danaher, one of Weidman's jiu-jitsu trainers, says he "wouldn't be completely shocked."

"[Weidman]'s a formidable opponent on the floor," Danaher tells MMAFighting.com. "Trust me, you cannot fall asleep on him for a second. If you do, don't be surprised if you see an unexpected result."

Danaher agrees there will likely be many exchanges on the floor. And when asked if Weidman as the superior wrestler can dictate where the fight goes, Danaher argues Maia is tricky enough that he can pull guard.

"He's very effective from bottom position," Danaher said of Maia. "I do think there will be a lot of groundplay even if Demian can't get the conventional takedown on Chris, I still think he could bring the fight to the ground."

Joining Danaher in Weidman's corner on Saturday night will be head trainer Ray Longo and training partner Gian Villante. They've all had only about just over a week to help Weidman prepare for Maia.

For Villante's part, he's been channeling his inner-Demian Maia to assist in Weidman's preparations. As someone who has trained with Weidman day in and day out, Villante also thinks Weidman's workman-style could open up the possibility of recording a submission over the former BJJ world champion.

On Thursday, Weidman spoke about his willingness to accept the risk of battling Maia for the submission.

"I have a lot of respect for Demian Maia's jiu-jitsu," Weidman said at the pre-fight press conference. "I think he's amazing. But ever since I got into MMA, my jiu-jitsu has been one of my main focal points. I'm competed in Abu Dhabi against the top-level grapplers in the world and I've done pretty well. I also train with some of the top guys in the world and I do pretty well. Based on that is what leads me to have the confidence to go on the ground and be confident there."