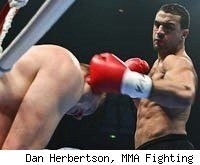 Badr Hari closed out his kickboxing career in style, knocking out Gokhan Saki in the first round of his farewell fight during an It's Showtime event in Leeuwarden, The Netherlands.

Hari knocked Saki down three times in the first en route to the win, with the first coming on an uppercut. He battered him throughout the rest of the round in scoring the stoppage for the 64th knockout of his carer. His career record now stands at 78-11.

The 27-year-old will now turn his attention to the heavyweight boxing scene.

The 6-foot-5, 240-pound Hari has long been considered one of the top kickboxers in the world, having won the K-1 world heavyweight championship twice.

In other action during the event, longtime MMA fighter Melvin Manhoef lost a decision to Tyrone Spong. Spong is one of UFC light-heavyweight contender Rashad Evans' striking coaches.